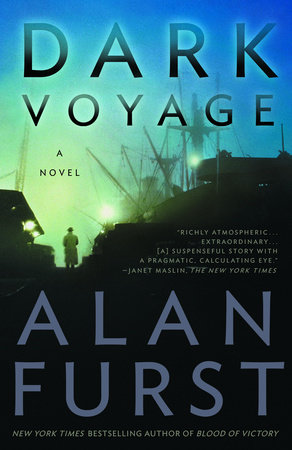 1. When he thinks he may be “blown to pieces” by a minesweeper’s cannon, DeHaan decides that this would be “an honorable end”–preferable to interrogation and execution in Germany. How does DeHaan’s notion of honor guide his actions throughout the novel? How would Kolb define honor? How would Maria Bromen?

2. How does DeHaan express remorse? Does he ever show signs of vulnerability?

3. Though brief, Patapouf’s role in the novel is pivotal. How–if at all–does it alter DeHaan’s attitude toward his mission? Why is Furst’s brisk description of Patapouf so effective?

4. Why does Furst devote his last paragraph to Maria Bromen? How has her relationship with DeHaan evolved? Do you feel you fully understand her by the end of the novel, or does she remain slightly mysterious? What does her life story reveal about the Soviet Union during World War II?

5. We learn a great deal about DeHaan: his literary interests, his father’s occupation, his taste in women, his sense of duty. What more would you like to know about him? What would we observe if Furst had narrated a few of DeHaan’s scenes from a different point of view–for example, Maria’s?

6. Critics praise Furst’s ability to re-create the atmosphere of World War II-era Europe. What elements of description make the setting come alive? How can you account for the facet that the settings seem authentic even though you probably have no firsthand knowledge of the times and places he writes about?

10. Love affairs are always prominent in Furst’s novels, and “love in the time of war” is a recurring theme. What role does the love affair play in Dark Voyage?

Under Occupation
Back to Top