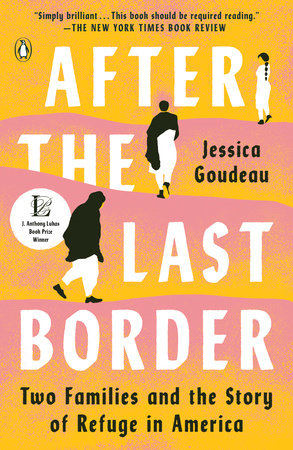 1. Why do you think the author chose to tell this story in this particular form, writing novelistic narrative sections interspersed with history?

2. There are many poignant scenes in the life of anyone who has gone through the intense process of resettling in a new country, and including those scenes might be necessary to fully tell their stories. Why do you think the author chose to include the scene of Mu Naw taking Pah Poe to the store? What were you thinking about while reading that scene? Did it tell you anything about Mu Naw?

3. For Mu Naw, though her young life was marked by war, upheaval, and stagnant years as a permanently displaced person, it’s in the US that she experiences the moments where she feels the most “untethered” to everything she thought she was. Have you ever experienced being disconnected from the places, people, and things that remind you of who you are? Did that experience help you relate to Mu Naws journey in those tough early months?

5. While Hasna is living in Jordan, she watches a mother bird guarding her nest on the walls of her new home. The bird is a hoopoe, which has a rich history of symbolism in Arabic literature. But for Hasna, the bird became a personal symbol—what do you think it meant to her? Have you had a moment like that, where something you observed or came across helped you understand your own situation better?

6. Before Hasna leaves for Jordan, she does something that might seem counterintuitive—she methodically cooks and stockpiles her freezer for Jebreel. What does that action teach you about her personality? How do you think you would have handled the situation?

7. Hasna is confused by Americans’ conceptions of what Syria is like. To her, the war is an aberration, and “Syria had always been a warm and open society, where Christians and Muslims and Druze, Circassians and Kurds, blended their lives beautifully. Muslim women were not judged for leaving their heads uncovered—hijabs were almost taboo in the years Hasna was having babies. . . . Later, as the association with the Muslim Brotherhood faded and it became more acceptable to show outward forms of religion, more and more women wore the hijab while others chose not to, and both decisions were fine.” What do you think of when you think of Syria? Has reading this book given you anything new to think about?

8. For a variety of reasons, stories about war, border issues, and refugees often center around men. What do we gain from seeing this experience through the perspectives of Mu Naw and Hasna?

9. In the afterword, Jessica Goudeau states why she settled on the method of storytelling used in this book, noting that many recent refugees in particular are often in the position of wanting their story told but needing their identities to remain anonymous—they still have loved ones in danger in their home country, and they don’t always feel safe in their new homes. She says, “My role is to hide what needs to be hidden and tell what needs to be told.” Does she accomplish this, in your opinion?

10. While reading the sections on the history of refugee resettlement in the United States, did anything surprise you?

11. Goudeau talks in the author’s note about how “our mercurial national moods lead to small and large policy shifts that radically affect real people.” In the history sections of the book, you can see how political rhetoric about refugees ranges from deeply humane to hurtful and damaging stereotypes. What kind of rhetoric have you heard in your own life and community about refugees? How have you seen that rhetoric change or shift?

12. After reading this book, what is one conversation you’d like to have with someone you know (or even don’t know), and what would you like to say?

13. Knowing how our policies and position on refugee resettlement as a country have changed throughout the years and knowing where it is now—what do you think we should do?

Learn More About After the Last Border
print

On All Fronts
Clarissa Ward

The Altar of My Soul
Marta Moreno Vega

Days in the Caucasus
Banine

The Country Under My Skin
Gioconda Belli

Out of Place
Edward W. Said

Stronger
Cindy McCain
Back to Top