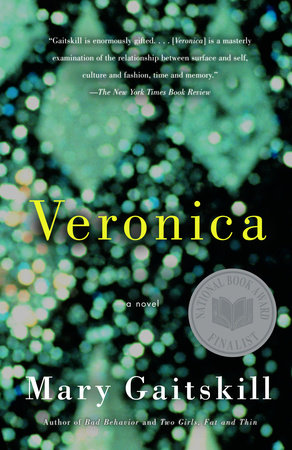 “Gaitskill is enormously gifted. . . . Throughout the book are passages of plainly spectacular beauty. . . . [Veronica] constitutes some of the most incisive fiction writing around.” —The New York Times Book Review

The introduction, discussion questions, suggestions for further reading, and author biography that follow are designed to enhance your group’s discussion of Mary Gaitskill’s Veronica, which The New York Times Book Review hailed as “a masterly examination of the relationship between surface and self, culture and fashion, time and memory.”

Set primarily during the narcotic glitz and casual cruelties of the 1980s, Veronica traces the rise and fall of Alison, from teenager runaway in San Francisco to the runways of Paris and finally to a menial job cleaning apartments in San Rafael. But the novel is far more concerned with Alison’s inner life than her outward trajectory. As she looks back over her life, Alison flows in and out of past and present, searching for meaning in the choices she has made, in the suffering that has come from those choices, and most of all in her friendship with Veronica, an eccentric office worker with AIDS who Alison meets while temping in New York. While Alison has been in many ways a prisoner to her beauty, exploited by photographers and agents, lured into the modeling world where she was manipulated, sexually used, and cheated out of her earnings, Veronica’s relative “ugliness” has allowed her to run her own show. Veronica is unlike anyone Alison has ever met—socially awkward, fiercely contentious, exhibiting her own ideas on style. Their unlikely friendship drifts in and out of various levels of intimacy and distance, but when Veronica contracts AIDS from her promiscuously bisexual boyfriend, Alison is the only one who does not desert her. And as Alison must deal with her own present illness and loss of stature, Veronica comes to haunt her thoughts more and more obsessively.

Ugliness and beauty, the ugliness that underlies beauty, and the way each exerts a kind of magnetic attraction and repulsion on the other, is a major theme of the novel. Alison describes Veronica, with “her ugly face, her proofreader’s kit—her rulers, her box of colored pencils—her prissiness, which denied the shit of the world and so drew it down upon herself” [p. 231]. Suffering comes down, with torturous intensity, on all the major characters of Veronica. But joy and gratitude move just under the surface of the narrative, looking for a way in, as Alison gropes her way toward hope amidst the wreckage of her life.

In prose that is as sensual, musical, and richly metaphoric as any in recent literature, Mary Gaitskill offers an unflinching exploration of one woman’s journey from desolation to stardom and back again.

1. What is the significance of the story Alison’s mother told her about the wicked little girl when she was a child? In what ways does it function as a kind of parable, or prediction, of Alison’s life?

2. Alison’s narrative shifts between past and present, or rather between several layers of the past and the present. What effects does Mary Gaitskill create through this method of narration? In what ways does it mirror the way the mind and memory actually work?

3. What kind of relationship does Alison have with her parents and with her sisters? How do they view her modeling career?

4. Gaitskill often personifies music in Veronica: “music, lightly skipping in the main rooms, here bumbled from wall to wall like a ghost groaning in purgatory” [p. 133]; “Music fell out of windows, splattered on the ground, got up, and walked away” [p. 141]. Why does Gaitskill emphasize music throughout the novel? Why is music so important to Alison?

5. Alison dreams of being a poet. In what ways is her narrative—in terms of its language and emotional intensity—suffused with poetry?

7. How does Alison’s experience as a model affect her—morally, emotionally, financially?

8. What does Alison mean when she says that she became a demon and “was saved by another demon, who looked on me with pity and so became human again. And because I pitied her in return, I was allowed to become human, too” [p. 256]? Why would such a mutual pity enable Alison and Veronica to regain their humanity? What is the source of this pity?

9. What does the novel suggest about the harsher reality beneath the surface glamour of the fashion industry? How do people treat each other in this world?

10. How does Alison fall from modeling in Paris to cleaning the photographer’s office in San Rafael? Is one job more demeaning than the other?

11. Why is Veronica so important to Alison? How and why does Alison’s relationship to Veronica change over the course of the novel?

12. What does the novel reveal about the early days of AIDS? How do people react to Veronica when they learn she has AIDS?

13. Veronica is an exceptionally painful novel, filled with sickness, cruelty, suffering, and death, and yet it ends with Alison saying, “I will call my father and tell him I finally heard him. I will be full of gratitude and joy” [p. 257]. What has she finally heard? What is she grateful for? Why does she anticipate such joy?

Mary Gaitskill is also the author of Because They Wanted To, which was nominated for the PEN/Faulkner Award in 1988. Her stories and essays have appeared in The New Yorker, Harper’s Magazine, Esquire, The Best American Short Stories (1993), and The O. Henry Prize Stories (1998). Her story “Secretary” from her collection of short stories, Bad Behavior, was the basis for the film of the same name. The recipient of a Guggenheim Fellowship, she teaches creative writing at Syracuse University. Veronica is a National Book Award, National Book Critics Circle Award, and Los Angeles Times Book Award Finalist. It was also named one of ten Best Books of the Year by The New York Times Book Review.

Dark at the Crossing
Elliot Ackerman

Wish You Were Here
Jodi Picoult

Something to Hide
Elizabeth George
Back to Top