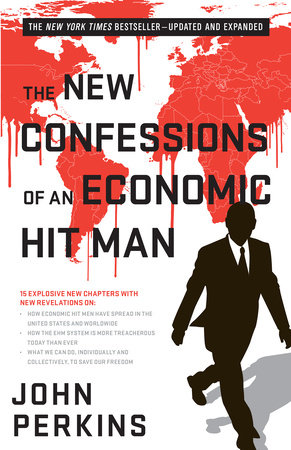 About The New Confessions of an Economic Hit Man

Featuring 15 explosive new chapters, this new edition of the New York Times bestseller brings the story of Economic Hit Men up-to-date and, chillingly, home to the U.S.―but it also gives us hope and the tools to fight back.

Former economic hit man John Perkins shares new details about the ways he and others cheated countries around the globe out of trillions of dollars. Then he reveals how the deadly EHM cancer he helped create has spread far more widely and deeply than ever in the US and everywhere else—to become the dominant system of business, government, and society today. Finally, he gives an insider view of what we each can do to change it.

Economic hit men are the shock troops of what Perkins calls the corporatocracy, a vast network of corporations, banks, colluding governments, and the rich and powerful people tied to them. If the EHMs can’t maintain the corrupt status quo through nonviolent coercion, the jackal assassins swoop in. The heart of this book is a completely new section, over 100 pages long, that exposes the fact that all the EHM and jackal tools—false economics, false promises, threats, bribes, extortion, debt, deception, coups, assassinations, unbridled military power—are used around the world today exponentially more than during the era Perkins exposed over a decade ago.

As dark as the story gets, this reformed EHM also provides hope. Perkins offers specific actions each of us can take to transform what he calls a failing Death Economy into a Life Economy that provides sustainable abundance for all. 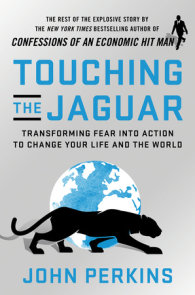 See all books by John Perkins

“When I read Confessions of an Economic Hit Man, I could not have known that, some years later, I would be on the receiving end of the type of ‘economic hit’ that Perkins so vividly narrated. The New Confessions resonates with my experiences of the brutish methods and gross economic irrationality guiding powerful institutions in their bid to undermine democratic control over economic power. Perkins has, once again, made a substantial contribution to a world that needs whistle-blowers to open its eyes to the true sources of political, social, and economic power.”
—Yanis Varoufakis, former Minister of Finance, Greece

“The New Confessions offers deep insights into the nefarious ways economic hit men and jackals have expanded their powers. It shows how they came home to roost in the United States—as well as the rest of the world. It is a brilliant and bold book that illuminates the crises we now face and offers a road map to stop them.”
—John Gray, PhD, author of the New York Times #1 bestseller Men Are from Mars, Women Are from Venus

“John Perkins probed the dark depths of global oligarchy and emerged into the light of hope. This true story that reads like a page-turning novel is great for all of us who want the better world that we know is possible for ourselves, future generations, and the planet.”
—Marci Shimoff, #1 New York Times bestselling author of Happy for No Reason and Chicken Soup for the Woman’s Soul

“Perkins provides a profound analysis of two forces vying to define the future. One is intent on preserving systems that serve the few at the expense of the many, while the other promotes a new consciousness of what it means to be human on this beautiful, fragile planet. This powerful book inspires and empowers actions that manifest an awakening to our collective ecosystem and the rebirth of humanity—an ECOrenaissance.”
—Marci Zaroff, ECOlifestyle pioneer/serial entrepreneur and founder of ECOfashion brands Under the Canopy and Metawear

“I loved Confessions of an Economic Hit Man. Ten years ago it exposed the real story. The New Confessions tells the rest of that story—the terrible things that have happened since and what we all can do to turn a death economy into a life economy.”
—Yoko Ono

“The New Confessions is an amazing guide to co-creating a human presence on our planet that honors all life as sacred. It exposes our past mistakes; offers a vision for a compassionate, sustainable future; and provides practical approaches for making the transition between the two. A must-read for anyone who loves our beautiful home, Earth.”
—Barbara Marx Hubbard, bestselling author and President, Foundation for Conscious Evolution

“As one who has helped thousands of people grow their businesses, I’ve learned firsthand the importance of facing the crises old economic models created and acting positively to develop new approaches. Perkins’s experiences, his exposé of the failures, his clear vision of what needs to be done, his call to action, and the sense of joy he feels for being part of this consciousness revolution are deeply inspiring.”
—Sage Lavine, women’s business mentor; CEO, Conscious Women Entrepreneurs; and founder of the Entrepreneurial Leadership Academy

“Conspiracy buffs are most likely to enjoy this updated version of a memoir that was a surprise bestseller in 2004…This revised version, he states, was written to answer the thousands of emails he received from readers interested in what they could do to resist.”
—Publisher’s Weekly, February 2016

“Mr. Perkins’s core message is that American corporations and government agencies employ two types of operatives: ‘economic hit men,’ who bribe emerging economies, and ‘jackals,’ who may be used to overthrow or even murder heads of state in Latin America and the Middle East to serve the greater cause of American empire. . . . [This} book seems to have tapped into a larger vein of discontent and mistrust that Americans feel toward the ties that bind together corporations, large lending institutions and the government — a nexus that Mr. Perkins and others call the ‘corporatocracy.’”
—The New York Times

“This riveting look at a world of intrigue reads like a spy novel . . . Highly recommended.”
—Library Journal

“Ultimately, Confessions is a parable for all Americans who try to deny the heartbreaking fact that our society’s affluence often comes at the wider world’s expense.”
—Utne Reader

“[A] gripping tell-all book . . . Perkins reveals how the US machine works behind closed doors and how America has exploited others for its own needs.”
—Rocky Mountain News

“Perkins claims may seem unthinkable to most Americans. But the evidence, looking at the world economy, is damning . . . the citizens of this country need to be willing to examine the actions of our political and corporate leaders and demand that they stop the destruction that is making the world an increasingly dangerous place to live.”
—Charlotte Observer

Preface
Introduction: The New Confessions
PART I: 1963-1971
1 Dirty Business
2 An Economic Hit Man Is Born
3 “In for Life”
4 Indonesia: Lessons for an EHM
5 Saving a Country from Communism
6 Selling My Soul
PART II: 1971-1975
7 My Role as Inquisitor
8 Civilization on Trial
9 Opportunity of a Lifetime
10 Panama’s President and Hero
11 Pirates in the Canal Zone
12 Soldiers and Prostitutes
13 Conversations with the General
14 Entering a New and Sinister Period in Economic History
15 The Saudi Arabian Money-Laundering Affair
16 Pimping, and Financing Osama bin Laden
PART III: 1975-1981
17 Panama Canal Negotiations and Graham Greene
18 Iran’s King of Kings
19 Confessions of a Tortured Man
20 The Fall of a King
21 Colombia: Keystone of Latin America
22 American Republic versus Global Empire
23 The Deceptive Résumé
24 Ecuador’s President Battles Big Oil
25 I Quit
PART IV: 1981-2004
26 Ecuador’s Presidential Death
27 Panama: Another Presidential Death
28 My Energy Company, Enron, and George W. Bush
29 I Take a Bribe
30 The United States Invades Panama
31 An EHM Failure in Iraq
32 September 11 and Its Aftermath for Me, Personally
33 Venezuela: Saved by Saddam
PART V: 2004-TODAY
34 Conspiracy: Was I Poisoned?
35 A Jackal Speaks: The Seychelles Conspiracy
36 Ecuador Rebels
37 Honduras: The CIA Strikes
38 Your Friendly Banker as EHM
39 Vietnam: Lessons in a Prison
40 Istanbul: Tools of Modern Empire
41 A Coup against Fundación Pachamama
42 Another EHM Banking Scandal
43 Who Are Today’s Economic Hit Men?
44 Who Are Today’s Jackals?
45 Lessons for China
46 What You Can Do
47 Things to Do
Documentation of Economic Hit Man Activity, 2004-2015
John Perkins Personal History
Notes
Acknowledgments
Index
About the Author