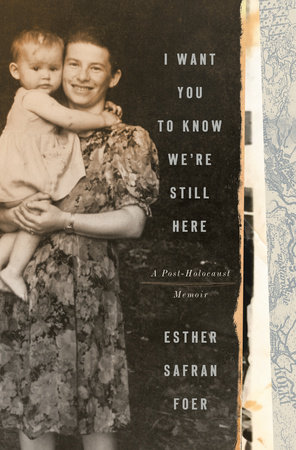 2. In the first chapter, Safran Foer writes, “It has been said that Jews are an ahistorical people, concerned more with memory than history” (p. 5). Do you agree with the statement? In what way does your own family fit into this idea? How does this idea fit in with Jewish religious observance?

3. In that same paragraph, the author continues, “History is public. Memory is personal. It is about stories and select experiences. History is the end of something. Memory is the beginning of something” (p. 5). In what way is memory the beginning? What is shared history if there is no shared memory? What is a memory if one has not personally had the experience? Was Esther’s search looking for history or memory?

4. What role did Everything Is Illuminated play in Esther’s story? How did the fictional story echo reality and how did it impact reality?

5. Esther writes about how Amos Oz’s book, A Tale of Love and Darkness, enabled her to begin to confront her own trauma around her father (p. 87). Have there been works of literature which have informed your own understanding of your family history or identity?

6. Why do you think Esther’s mother kept her father’s letters from her, even as an adult? Was this an act of protection?

7. Esther writes that she is a “hinge” between her mother and her own children, that she had a “role in this story as the biological link” between the two generations (p. 102). Other than being a daughter and a mother, how does she work to fulfill what she sees as her role in the story? Does her contemplation of her role differ from that of anyone in a “sandwich generation”?

8. In preparation for the trip, Esther decides to bring her family Rosh Hashanah cards to Ukraine. What does it mean to leave something behind? Why did Esther choose the cards as her object to leave?

9. On many occasions, elements from the natural world (dirt, trees, etc.) are mentioned throughout the book. When did they appear, and what was their significance?

11. In recounting the family’s Passover traditions, Esther writes, “it’s an occasion to bring memory alive….Storytelling is fundamental to resilience” (page 110). Why is storytelling fundamental to resilience? Do you think this is referring to personal resilience or communal? How does this contrast with the way in which Esther’s parents, and many other survivors, chose to move forward with their new lives without talking much about the past? What are some of your family traditions–in general or around a holiday–that are designed to bring memory alive?

12. The concept of names appears throughout the book, from Esther’s desire to learn her half-sister’s name to the descriptive nicknames that were used in the shtetls and the shifting names of the villages. There is also the poem by Zelda Schneurson Mishkovsky that was read at the mass graves in Trochenbrod, “Unto Every Person There Is a Name.” What is the significance of a name? Why is it so important to Esther to discover her sister’s name?

13. When asked why she refused a piece of pork even in the face of starvation, Esther’s mother answers that, “if nothing matters, there’s nothing to save” (p. 32). What does she mean by that? What is she trying to save? Is there something that you feel so strongly about that you would stand behind it no matter what you faced?

14. Nadiya asks Esther, “Why are you here?” (p. 197). Aside from learning concrete details about her father’s family, why does Esther travel to Ukraine? What does she want to find that she didn’t find through records, maps, testimonials, genetic tracing, and books? Have you been on a heritage trip or thought about traveling to an ancestral homeland? In thinking about a trip like that, what did you hope to find, to learn, to experience?

Discussion questions provided by The Jewish Book Council, 2020
Learn More About I Want You to Know We’re Still Here
print

What You Have Heard Is True
Carolyn Forché

Where I Was From
Joan Didion

Time to Be in Earnest
P. D. James