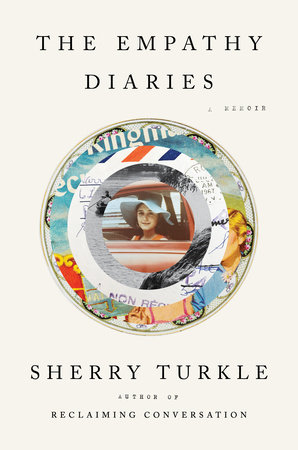 
My mother kept me from my father because she feared him. She had caught him performing psychological experiments on me. How does this early revelation color your reading The Empathy Diaries? It begins, after all, with a man who is the opposite of empathic.

I searched for my identity in a “memory closet,” where I found a photograph of my never-spoken-of-father with his face blacked out. It gave me a lifelong interest in searching for meaning in concrete objects. Do you have objects of childhood that were precious to you the way the objects of the memory closet were to me?

Living as a Bonowitz, I was secretive. Living as a Turkle, I was anxious. I fantasized (wished for?) invisibility as I longed for empathy. How do I handle these feelings and frustrations to find greater satisfactions?

Why does studying from “review books” make me feel fraudulent in school despite my hard work? What does this suggest about what kind of teacher I’m going to be, what kind of educational philosophy I will be drawn to?

Why is the notion of “decountrifying” so useful to me?

I describe several college courses that I still believe taught me how to think. What were the merits of these courses? I seem less interested in content than thinking about thinking.

When I learn my mother is dying, I face that on some level, I am not surprised. How do I try to think about the things we know but cannot say?

I was drawn to studying people on the margins of things. Do you think, in doing so, I was trying to think more deeply about myself?

I describe the contribution of mentors. What did they each provide? What does my experience suggest about the importance of face-to-face conversation in education?

Jacques Lacan wants to destroy the notion of a privileged “discourse of the master,” yet at his school, he is very much in the position of “thought master.” Many large organizations seem to this conflict. Do you come to this book with your own examples in mind?

The scene when my grandfather insists that my grandmother will not have home nurses cuts through my idealizations of him. Reading back, does this scene illuminate earlier episodes of Bonowitz life, including perhaps, my mother’s haste to marry Milton?

I try to capture the moment of infatuation even if one suspects one’s choice may not be wise. I tried many strategies before settling on my final choice of replicating the conversation, topic by topic. Discuss my choice. Compare it to other possible strategies.

When I take Seymour home to meet my grandfather, their encounter illustrates Seymour’s gifts as a teacher. He charms my grandfather with a juggling lesson. What elements of pedagogical strategy does Seymour bring together in that  lesson?

I describe my early days of teaching and asking my students to write “object papers,” papers that describe a fist object that was important in their lives: a spalding ball, a baseball mitt, a set of jacks, a deck of cards. Readers: Do you have an early object that influenced your later thinking and feeling?

I finally visit Charlie. I think it’s important that in the end, I ask Seymour to join me. Yet I am also shocked by a certain “similarity” between the two men. The comparison is unfair. Seymour is a world class scientist. Charlie, a crank. But my mind plays tricks with me and sees odd similarities. As a reader, could you empathize with my feelings?

I have a showdown with Charlie when he tries to interfere with my MIT life. It ends our connection, after all the effort I put in to find him. Could I have handled things better?

I have a showdown with MIT, which ends up firing me before I get them to rehire me. I draw some practical lessons from my struggle. Would you choose others?

I worry about a flight from conversation as people would rather text than talk and a new kind of isolation as we turn to screens instead of each other… or turn to each other via screens. I write of “the illusion of companionship without the demands of friendship.” On social media we can feel close but not vulnerable. Does this correspond to your experience of new media?

What are the benefits of seeking out experiences where you are a “stranger to your own voice?”

There Will Be No Miracles Here

The Book of Awesome

Diary of a Misfit
Back to Top