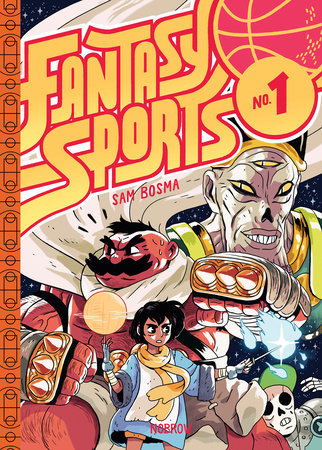 In Sam Bosma’s debut graphic novel, a young explorer and her musclebound friend go treasure hunting in a mummy’s tomb—but if they want to get rich, they’re going to have to best the mummy in a game of hoops! Can they trust their bandaged adversary to play by the rules? Or will they be stuck in the tomb… forever?

A fast-paced sports adventure graphic novel in the vein of 1960’s manga, Mike Mignola, and Raiders of the Lost Ark, Fantasy Sports is poised to be Nobrow’s first breakout adventure comic for the indie and YA scene. 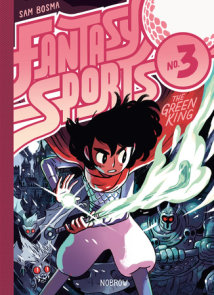 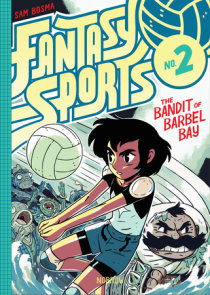 Winner of the 2016 Ignatz Award for Outstanding Comic

This offers excitement from the first page and plenty of vigor, […] to appeal to readers of a wide range of ages and abilities. […] A sequel can’t come quickly enough, and fans across genres (fantasy, sports buffs, comics fans, and adventure readers) will likely all be eagerly waiting for it.
—The Bulletin of The Center For Children’s Books, Starred Review

[…] some of the weirdest, most incongruous, coolest magical comic-book fights you’ve ever seen. […] The combination of banter, sight gags, and adventure were total kid-crack. Dad-crack, too.
—Boing Boing

She may be an intern, but she serves as the lead, an astute and agile heroine who gives readers a new, strong female character in the comics world…Bosma successfully blends fantasy, myth, and sports to kick off this new modern comic(al) series. Whether sports fans, fantasy enthusiasts, or just comics lovers, readers will be eager for more adventures with this unlikely duo.
—Kirkus Reviews

A great choice where graphic novels are popular, especially quirky ones that blur the lines between genres.
—School Library Journal

Sam Bosma delivers an irrepressibly fun, knowing, and breezy tale of sporting playoffs, magical mages, and surprisingly cute skeletons in Fantasy Sports […] this colored edition is beautiful, with the bright jewel shades imbuing it with real oomph and personality—a buoyancy and light absent from it’s earlier incarnation. […] Bosma’s panelling and layouts add another dimension of interest; they’re dynamic and inventive with diagonal slashes that set the pace and movement, showcasing his gorgeous art in slim, wide panels as the players lock in game, swishing around one another—arms open, passing on the left, on the right. Swoosh, jump, slam dunk.
—The AV Club

Bosma’s colorfully jumbled, slanty panels look like the inspired offspring of Spirited Away and Space Jam, capturing magical intrigue, fast-paced basketball action, and the best kind of on-the-court trash talk in one go. The only drawback to this winning combo of wizarding and athletics is that it is over too soon!
—Booklist

Bosma takes advantage of the fantasy setting and comics’ unlimited visual-effects budget to create a game of basketball more compelling than any NBA broadcast.
—Publisher’s Weekly

[…] the narrative balanced with the illustrations propels the reader forward. The characters themselves are interesting to read, with their own unique personalities and abilities that stand them apart from the others. […] While the targeted demographic is teens, FANTASY SPORTS’s action packed scenes and occasional mature humor makes this a book for all ages.
—Graphic Novel Reporter

Basketball has had magic before, but never quite like this.
—Newsarama

Athletics and magic collide for this funny, fast-paced YA graphic novel. […] the narrative never feels preachy or moralistic. […] As a YA release with a standout female protagonist, it’ll hit off with readers off all ages.
—Paste Magazine

Sam Bosma’s Fantasy Sports No. 1 is a very well-crafted comic, from cover to cover. Even better, it’s fun, and in a way that feels unique and wholly its own. In short, it’s something comics needs a whole lot more of.
—SKTCHD

Sam Bosma delivers a fun romp with larger than life characters, great action and some good laughs […] The tone of this OGN is reminiscent of Bone, with the same free spirited adventure and fun about it. This will appeal to the same age group of readers and the female heroine, Wiz-Kid, is a great example of a well rounded, courageous and smart young girl. She is a great character and Sam Bosma has crafted a winner with this fun young girl. His art style is all the best parts of indie work, filled with spunk, crazy style and wild colour work.
—Comicosity

If you have a family member, friend or neighbor with a tween who loves comics, run right away and order Fantasy Sports No. 1 by Sam Bosma, then sit back and know that you are the coolest aunt/uncle/friend/neighbor ever.
—Yuricon

Fantasy Sports has the makings of a timeless classic that could introduce sports fans into fantasy stories and comics, introduce comics fans into sports, and help break stereotypes that teen magic stories/teen sports stories/comics in general are about teen boys.
—Loser City

Style wise Bosma has a pleasing, dynamic “post-anime invasion” aesthetic that combines heavy Studio Ghibli influence with western artists like Herge and Jean Giraud through a Bryan Lee O’Malley Scott Pilgrim lens. Energetic coloring is a main draw, it was fun to see the color theme shift from page to page. Visually, it looks like it would adapt well to animation too, and we think it would be more than home alongside Cartoon Network cartoons such as Steven Universe (which means a lot to us) or beside an online series like Bee And Puppycat.
—Sub-Cultured

The sparks a little, in my humble opinion, of the underground artists of years gone by. It is wonderfully outside of the mainstream, winkingly knowing and gloriously pitched.
—Down The Tubes

It’s all there isn’t it? Where to start? Herge updated? A touch of modern manga styling coming in? the colours, those ever so lovely colours, the design, the look… it took my breath away. And it sort of keeps it all going from that point onwards. Artistically, it’s a really solidly great book, it just looks gloriously fresh, taking the best bits of so much, mixing them all up, ending up with something that mixes a load of manga style and motion with Adventure Time et al looks and ends up with something really modern and now.
—Forbidden Planet