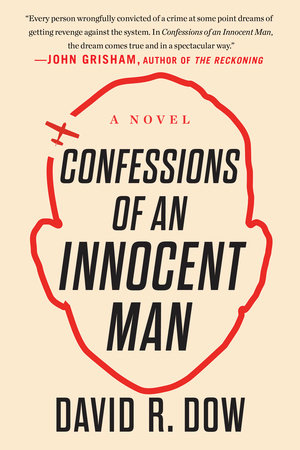 1. Rafael is the narrator of this book, so we only get his perspective on the story. Do you think his version of events is reliable?

2. Rafael calls Tieresse his love and soul mate. With her permission, he sleeps with other women. Is he unfaithful? Why or why not?

3. How much do you think Rafael’s race and background had to do with the judge’s readiness to convict him? Does his case remind you of anything you’ve read about in real life?

4. Of everyone who had a hand in Rafael’s wrongful conviction, why do you think Rafael feels compelled to take revenge on these two judges? Do you think his behavior is justified?

5. Tieresse’s son, Reinhardt, has a complicated relationship with Rafael. How does it evolve and change throughout the novel?

6. Author David R. Dow is the founder and director of the Texas Innocence Network and has years of experience working with death-row inmates. How do you think his background informs the story? Did anything about Rafael’s experience on death row surprise you?

7. Rafael’s block-mate, Águila, tells him “Some victories cain’t be measured in conventional terms.” Their friendship has a profound impact on Rafael. What do you think he learns from Águila?

8. Why does Rafael spend so much time talking with Moss and Stream? Does he hope to find some type of absolution in their conversations? Can he forgive himself for what he’s done?

9. Before our story begins, Reinhardt tells Tieresse, “the difference between the life you have and the life you envision is equal to the distance between perfection and reality.” How is that idea referenced throughout the novel? Do you believe Rafael makes peace with the way his life has turned out?

10. How should we interpret the book’s final scene? Is it clear that Rafael dies? And, regardless, is the message that justice has been served? Why or why not?

Until She Comes Home
Lori Roy
Back to Top