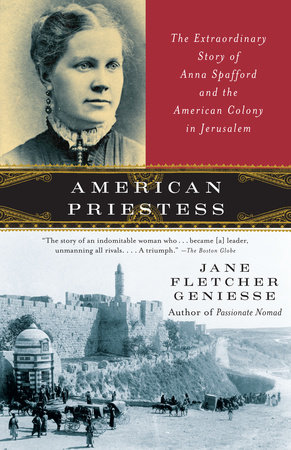 The introduction, questions, and suggestions for further reading that follow are designed to enhance your group’s discussion of American Priestess by Jane Geniesse.

Until now, few have known the true story of the house that became the American Colony Hotel, a retreat for foreign correspondents, diplomats, pilgrims and spies, or its bizarre history of tragedy, religious extremism, emotional blackmail, and peculiar sexual practices.

After suffering personal tragedy in the years following the Civil War, a prominent lawyer Horatio Spafford and his blue-eyed wife Anna rode the mighty wave of Protestant evangelicalism deluging the nation. Their charismatic leadership attracted followers eager to believe the Spaffords’ prophecy that the Second Coming was at hand. In 1881, the Spaffords and their followers sailed to Jerusalem to see the Messiah alight on the Mount of Olives.

The Americans who were already settled in the Holy City declared the colonists heretics and whispered of sexual deviance, but Muslims and Jews admired their unflagging care of the sick and the needy, and Jews were intrigued with their advocacy of a Jewish Return to Zion. When Horatio died, Anna assumed leadership, shocking even her adherents by abolishing marriage and established a dictatorship that was not always benevolent. Ever dogged by controversy, she and her credulous followers lived through and closely participated in the titanic upheavals that eventually formed the modern Middle East.

American Priestess provides a fascinating exploration of the seductive power of evangelicalism and raises questions about the manipulation of religion to serve personal goals.

1. The “Overcomers” are described as “educated, attractive, mostly well-to-do, and some socially prominent.” Did this affect the way they were viewed by others? Have you ever felt more or less judgmental of particular religious adherents based on superficial characteristics (i.e. mainstream Mormons and Jews versus the less-assimilated Fundamentalist Mormons or Hassidic Jews)?

2. The author quotes Alexis de Tocqueville’s observation that Americans of his day were prone to extreme religious practices and beliefs: “Religious insanity is very common in the United States.” Even today, many Europeans look at Americans as beholden to an outdated puritanical ethic. Does de Tocqueville’s statement still apply to Americans today?

3. Throughout the book, Anna seems to avoid funerals and burials. Do you think this stems from her intense effort to suppress her earlier tragedy at sea or rather is it an indication that she did not want to confront the fact that her idyllic colony was suffering many losses?

4. At the core of the Overcomers’ decision to establish roots in Israel was the belief that final judgment would occur after the Jews returned to Zion. Many people argue that the contemporary American “religious right” is stridently Zionist for the same reason, yet a July 2006 poll by Pew Forum of Religion and Public Life found that 42 percent of all Americans believe “Israel was given to the Jewish people by God” and 35 percent believe that Israel is “part of the fulfillment of biblical prophesy about the Second Coming of Jesus.” How do these views affect you personally, your community, and even deliberations in Washington, DC? Are there other explanations for this particular form of Zionism?

5. Throughout history, leaders of fanatical movements have often been extremely intelligent, charming, or both. Anna’s contemporaries often pointed to these qualities to explain her ability to establish a devoted following. Have you ever been drawn in by a messenger rather than a message?

6. In the Afterword, the author writes, “Anna…was hardly the first, and certainly will not be the last, to use religion as a tool in the service of goals having more to do with Caesar than with God.” What are some contemporary examples, from recent political campaigns or politicians’ actions, that demonstrate that God is often improperly evoked for political and personal gain?

7. Anna’s torment at sea and the loss of her children seemed to ignite even more devotion and enthusiasm for her causes. In times of trial do you personally feel your faith grows stronger or do you instead find cause to doubt that there is a greater purpose?

8. Horatio, and later Anna, dissuaded their followers from working, often assuring them that “God will provide.” This angered many of their adversaries who felt that able-bodied adults shouldn’t rely on charity for their survival. Discuss.

9. Was Anna complicit in Horatio’s death? Did her decision to “become one with another man” and her refusal to offer professional medical attention to her critically ill husband cause or accelerate his death?

10. On page 155, Mary’s brother, Professor Lingle, says, “I have seen and heard enough to believe that [my sister] is completely under the control of Mrs. Spafford and hence does not wish to return with me to America…I do not believe it is her real wish.” Questions of free will and brainwashing often arise in cases of religious fanaticism. Do you feel it is sometimes within the authorities’ rights to intervene when it seems as though a person is under the control of a harmful entity (e.g. the 2008 raid of the Fundamentalist Mormon compound in Texas)?

11. Through manipulation and underhanded tactics, Anna’s daughter Bertha was able to prosper financially and socially while most of the colonists lived very simple lives. History has shown that leaders who preach equality and charity often allow for exceptions in terms of their own inner-circle. Is there evidence to suggest that Anna and Bertha’s inconsistencies led to jealousy within the colony? Did Bertha’s flaunting of her elevated status eventually lead to the unrest among the devotees?

12. While Anna gave U.S. Consulate Selah Merrill many reasons to be frustrated and annoyed with the colony, his eventual explosive comments to the journalist Alexander Hume Ford seemed to indicate a certain obsessiveness and unreasonable anger towards the colony. Was Merrill’s extreme hatred justified, or did it indicate a character flaw?

13. While many of Anna’s actions and beliefs were destructive, it could be argued that through wit, determination and cunning, she was able to accomplish an impressive feat for a woman in a time when women were generally powerless. Are there reasons to admire Anna’s accomplishments? Whether her beliefs were right or wrong was she still a remarkable person?

14. If the emotional heart of this story is Anna’s transformation from a passive and dependent wife to a formidable leader certain of the rightness of her convictions, how would you describe the traits in her personality that helped her to achieve this change in status? Discuss this from a psychological standpoint. Do you know anyone like Anna? Do you find any of Anna’s traits in yourself?

15. The author dedicates this book to her grandchildren and writes, “As they decide the future, may they also study the past.” This is a sentiment that has been repeated in various forms in many places. As a reader, what lessons did you take away from this book? Are there warnings in its pages that could apply to your life or to people you know?

16. What role did Horatio’s personal failure play in Anna’s emergence as the Overcomers’ leader? Do you know any marriages that have experienced a similar shift in the balance of power?

Jane Fletcher Geniesse, a former reporter for the New York Times, researched American Priestess for seven years. Her biography of Freya Stark, Passionate Nomad, was a New York Times Notable Book and a finalist for the PEN/Martha Albrand Award. She lives in Florida and Washington, D.C.

The Kidnapping of Edgardo Mortara
David I. Kertzer

The Invention of the Land of Israel
Shlomo Sand

The Memoirs of Glückel of Hameln
Gluckel

The End and the Beginning
George Weigel

How to Be a Muslim
Haroon Moghul

The State of Israel vs. the Jews
Sylvain Cypel

A History of Zionism
Walter Laqueur

After the Prophet
Lesley Hazleton

In Search of Fatima
Ghada Karmi

How I Stopped Being a Jew
Shlomo Sand

Sharon and My Mother-in-Law
Suad Amiry

Moses
Jonathan Kirsch
Back to Top