The Most Fun We Ever Had Reader’s Guide 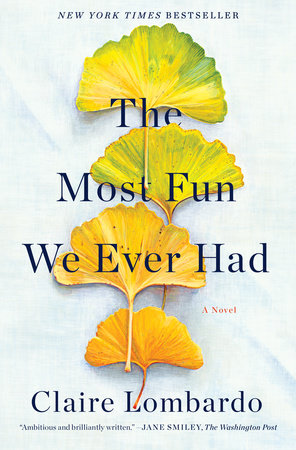 The Most Fun We Ever Had Reader’s Guide

print
The Most Fun We Ever Had Reader’s Guide

“Everything about this brilliant debut cuts deep: the humor, the wisdom, the pathos. Claire Lombardo writes like she’s been doing it for a hundred years, and like she’s been alive for a thousand.”
–Rebecca Makkai, author of The Great Believers

A dazzling, multigenerational novel in which the four adult daughters of a Chicago couple–still madly in love after forty years–recklessly ignite old rivalries until a long-buried secret threatens to shatter the lives they’ve built.

When Marilyn Connolly and David Sorenson fall in love in the 1970s, they are blithely ignorant of all that’s to come. By 2016, their four radically different daughters are each in a state of unrest: Wendy, widowed young, soothes herself with booze and younger men; Violet, a litigator-turned-stay-at-home-mom, battles anxiety and self-doubt when the darkest part of her past resurfaces; Liza, a neurotic and newly tenured professor, finds herself pregnant with a baby she’s not sure she wants by a man she’s not sure she loves; and Grace, the dawdling youngest daughter, begins living a lie that no one in her family even suspects. Above it all, the daughters share the lingering fear that they will never find a love quite like their parents’.

As the novel moves through the tumultuous year following the arrival of Jonah Bendt–given up by one of the daughters in a closed adoption fifteen years before–we are shown the rich and varied tapestry of the Sorensons’ past: years marred by adolescence, infidelity, and resentment, but also the transcendent moments of joy that make everything else worthwhile.

Spanning nearly half a century, and set against the quintessential American backdrop of Chicago and its prospering suburbs, Lombardo’s debut explores the triumphs and burdens of love, the fraught tethers of parenthood and sisterhood, and the baffling mixture of affection, abhorrence, resistance, and submission we feel for those closest to us. In painting this luminous portrait of a family’s becoming, Lombardo joins the ranks of writers such as Celeste Ng, Elizabeth Strout, and Jonathan Franzen as visionary chroniclers of our modern lives.

1. Gingko leaves and trees show up many times during the course of the novel—during the opening scene and when David and Marilyn first fall in love, just to name a couple. How do gingkoes function as a symbol in the book? What do they represent?

2. Who is your favorite character in the novel? Who are you most similar to?

3. By the end of The Most Fun We Ever Had, we’ve seen decades of David and Marilyn’s marriage unfold through many ups and downs. What do you see as the key to their successful and enduring marriage?

4. Do you think the way Wendy surprised Violet with Jonah was ethical? Do you think Violet’s reaction was warranted?

5. Were you surprised by Violet’s secret that gets revealed toward the end of the novel? How would you react if you were Wendy?

6. Many readers share that reading The Most Fun We Ever Had was an emotional experience. What was the most emotional scene for you to read? Why?

7. The narration switches between the perspective of each family member throughout the course of the book. What did this style add to the novel as a whole? How would the book be different if the author only focused on one character?

8. The book starts and ends with Marilyn’s perspective. Why do you think the author made this choice?

9. In what ways is the Sorenson family like your own family?

10. What did you think about the book’s ending? What do you think will happen to the Sorenson family after the book ends?

11. What other books, movies, and TV shows does this novel remind you of?

CLAIRE LOMBARDO earned her MFA in fiction at the Iowa Writers’ Workshop. She was born and raised in Oak Park, Illinois. A former social worker, she now teaches fiction writing and is at work on a second novel.
Learn More About The Most Fun We Ever Had
print