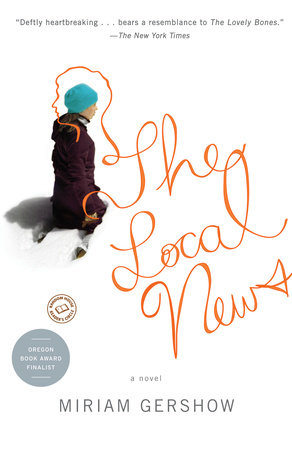 1. In the first half of the book, what does Lydia believe happened to Danny? Based on her actions and attitudes, what might she think is the cause of her brother’s disappearance?

2. As Lydia is delivering Missing Person posters through the neighborhood in Chapter 2, she confesses, “In the beginning, the sympathetic attention of strangers was still intoxicating” (page 8). How does Lydia’s response to such attention change throughout the book? Does she remain, on some level, intoxicated by it?

4. What is Lydia’s motivation for getting involved in the investigation of Danny’s disappearance? Why is she so drawn to Denis?

5. What is the significance of the title? We see a newscast with Kirk Donovan early in the book. Are there other meanings to the idea of “the local news?”

6. How would have Lydia’s story been different if her parents had been “clingers” instead of “drifters”?

7. Through the Saturday searches, the school assembly, and shiva, among other times, we see the larger community respond to Danny’s disappearance. How would you characterize the community reaction? And is this reaction a balm or a burden for the Pasternak family and for Lydia, in particular?

8. How might the family and community have reacted differently were Lydia the one to disappear? Do you think there would have been as much drama, sentiment, and grief focused on her absence?

9. Lydia has three distinct best friends through her tenthgrade year—David Nelson, Lola Pepper, and Bayard. What does each of these friendships reveal about Lydia?

10. Danny left a strong impression on everybody around him. He was known as either a bully, a champion, a leader, or a struggling student. Who was the real Danny? How do all of these pieces of his personality fit together?

11. At the end of the interrogation scene between Denis and Lydia, Lydia watches him shrug and notes, “I had no idea what he meant by it. Sorry, Charley? Whoops? All in a day’s work?” (pages 233–234). What do you think Denis means by the shrug—and by the entire interrogation? What are his motivations? Does he truly suspect Lydia of wrongdoing? Is he just doing his job or is something darker at work?

12. In the scene of the near car crash, Lydia says of her father’s sudden reassurances from the passenger seat: “I remembered a little bit that he loved me, so I loved him a little bit back” (page 247). Who has been most guilty of holding back their affections in the Pasternak family? Lydia? Her parents? All equally? Why do you suppose these affections have been so long suppressed?

13. Lydia spends much of her time estranged from other characters in the book. She’s most dramatically estranged from her parents, but soon also grows estranged from David Nelson, and eventually from Denis, Lola Pepper, Tip Reynolds, and everyone else who crosses her path during this year. Does she detach because of the extraordinary circumstances of her brother’s vanishing, or would she have been a profound loner even had Danny not disappeared?

14. There is a twelve-year gap between the year Danny goes missing and the reunion. What do you imagine Lydia’s life was like during those intervening years? How would she have fared during her final two years of high school? How successful were her college years? Her years in D.C.?

15. At the reunion, Lydia says the “real question” is who she and Danny would have been to each other as adults. Do you think their relationship would have changed or would it have remained the same as it had been in adolescence?

16. The idea of “drifting” comes up throughout the book. Lydia’s parents are classified as “drifters.” Lydia lets herself get swept along with Lola’s enthusiasm and Danny’s friends’ attention and Bayard’s bemused incomprehension of America. Lydia wants to feel a bit lost in the end and theorizes that Danny did too. What do you make of this theme of drifting? What is its significance in the story?

17. In the final car ride with David Nelson, Lydia reflects, “There was a part of me that had long curled in on itself and atrophied, perhaps beginning the day Danny slipped unremarkably out the front door, perhaps long before that. I could feel it unfurling now, churning through my watery belly and rising up my throat, coming out my nostrils and my mouth, dragon breath singeing my earlobes and making my face sweat even in the breeze of the AC” (pages 355–356). What exactly is the part of Lydia that had curled up on itself and atrophied? And why is it opening now, in this car ride?

18. The novel ends when Lydia is twenty-eight. Do you think she has, at this point, “recovered” from Danny’s disappearance? Has her mother?

19. In the last sentence, Lydia’s thinking about Danny “jangling with possibility and promise, his future wide open” (page 357), and yet we know his future was grim. What do you think this ending might say about Lydia and her future?

1966 And Not All That
Mark Perryman

7 Ways to Build a Better You
Sheri Rose Shepherd

How to Win at Life by Cheating at Everything
Mark Perez

Why Am I Up, Why Am I Down?
Roger Granet

A Newcomer’s Guide to the Afterlife
Daniel Quinn