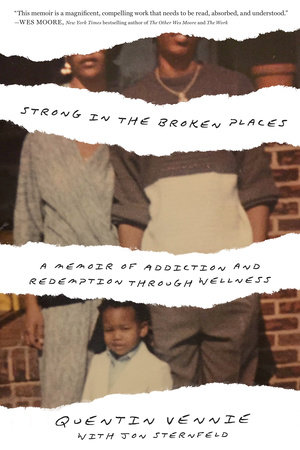 Quentin’s story is a riveting one, one that proves that during our weakest moments, we have the power to unlock unimaginable strength. No matter how difficult, no matter the obstacles that stand in our way, we always have a choice.

Quentin Vennie has walked a path that many don’t live long enough to write about. Growing up in Baltimore, he was surrounded by dead ends, haunted by abandonment and violence, and struggled with anxiety and depression from a young age. He became a victim of circumstance, becoming a drug dealer and eventually became an addict himself.

But at his lowest point, when he realized how bad things had gotten, he decided to pull himself out. He made the conscious choice to begin a journey of natural healing that ended up saving his life. He bought a juicer from the local convenience store and started juicing. He incorporated meditation and yoga into his lifestyle. Through sheer force of will and a heartfelt desire to heal, Quentin, now a wellness expert, was able to turn away from his self-destructive path and forge a new one.

He adopted a “trinity of wellness”—yoga, meditation, and juicing—that kept him on that new path. Juicing nourished his body, yoga kept him active both mentally and physically, and meditation helped him stay balanced and in tune with what was truly important in life.

Quentin’s story is a riveting one, one that proves that during our weakest moments, we have the power to unlock unimaginable strength. No matter how difficult, no matter the obstacles that stand in our way, we always have a choice.

1. Quentin deals with anxiety and depression by numbing his feelings: drugs, smoking, drinking, and compulsive exercise. Even when he is in a loving relationship and with a steady job, his need to get out of his own head persists. Where do you think his need to escape stems from?

2. As a child, Quentin was forced to have a thick shell. He needed to protect himself from his environment and, in a sense, prepare himself for a certain kind of life. He was taught that he didn’t have the right to feel. When you grew up, were you taught to honor your feelings, or to suppress them?

3. One theme in the book is strength, and how too much of it can be detrimental. It’s typical with men who have been raised to be “tough,” taught to detach from their feelings, and told that the only acceptable emotion is anger. When feelings swell, they don’t know how to cope, let alone identify what they are feeling. How have you seen this expectation of men play out in the world today? Have you, as a man or as a woman, had the experience that the weight of certain expectations were destructive for you?

4. In Chapter 11, Quentin suffers an accidental overdose. Rather than being an obvious wake-up call for change, Quentin shames himself for it; he is embarrassed by what he sees as a weakness, afraid of being judged, and afraid of being vulnerable. He does not want to be open about his life. Have you ever felt the need to be closed off about your life, especially when it comes to your mental health or feelings? How do you think those self- or societally-imposed “rules” have affected how you interact with those around you?

5. At the end of Chapter 13, Quentin makes the decision to kill himself. Once he’s decided this, he feels relief. “… an ease flowed out of me, a peace emerged from the letting go. I had been feeling my emotions far too much, was oppressed and persecuted by them every hour of the day. Every ounce of pain and frustration I felt all my life, the disappointments, the heartache of my son leaving, the broken promises by my father, the things said to me by authority figures, the failures I’d accumulated, I felt it all so intimately. It all validated my decision.” How did you feel as you read this passage and as you followed Quentin to this part in his story? How did you react to his thinking that suicide was the right thing to do?

6. In the car when he has prepared to kill himself, Quentin isn’t able to find the gun. He comes to see this as divine intervention, as a “come-to-Jesus” moment. It was a moment in which God and the universe showed him that his life had value and that he was meant to live. Have you experienced such a moment?

7. After countless struggles, Quentin was able to turn his life around by looking within. His darkest moment was his turning point. Have you ever had the experience where a serious struggle becomes the catalyst for a major life change?

8. Throughout the book, Quentin uses yoga poses to illustrate various qualities that illustrate a major concept in life. Child’s Pose, a restful and secure posture, opens the chapters on Quentin’s childhood, which was far from restful and secure. Tree Pose, a dynamic pose that enhances focus and challenges the balance, opens the section on his turning point towards health. Did you find the parallels between the yoga postures and the moments in his life helpful? With yoga or with any movement practice, have you noticed that the qualities cultivated in certain movements mirror events or emotions in your life?

9. Through meditation and learning about the breath, Quentin more in tune with how the mind works. “What we think becomes our reality; therefore what we do begins with who we perceive ourselves to be. The goal is to free your mind from the control over it that we’re conditioned to having.” How has your perception of yourself shaped your actions?

10. Quentin credits his “trinity of wellness” for turning his life around—a combination of juicing, meditation, and yoga. Juicing healed him from the inside out, yoga allowed him to feel and face discomfort, and meditation brought him in touch with his conscious mind. What tools have helped you in life? What actions or practices have transformed you?

Quentin Vennie is a celebrated wellness expert, writer, speaker, and motivational guide. After years of fighting a war of poverty, anxiety, depression, and addiction on the streets of Baltimore, he set out on a journey to heal himself, and was able to successfully change and save his life through his Trinity of Wellness system―a combination of yoga, meditation, and fruit and vegetable juices. His writings have been featured on health and wellness platforms including the Huffington Post, Mind Body Green, Positively Positive, and Mantra Yoga + Health Magazine.
Learn More About Strong in the Broken Places
print
Back to Top