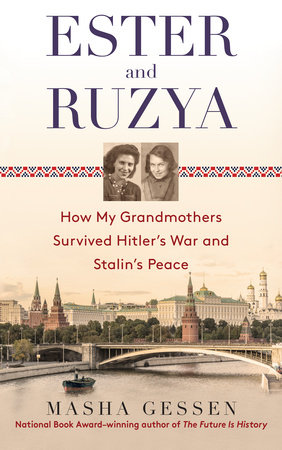 A highly acclaimed, unforgettable memoir, Ester and Ruzya brings to light untold chapters from one of Europe’s darkest times. Creating both a moving personal tribute and an impeccably researched historical record, journalist Masha Gessen introduces us to two remarkable women whose lives will inspire all who read their story.

In Poland and in Russia, two young Jewish women began their life journeys against a backdrop of  war, persecution and danger. Ester watched the decimation of her beloved hometown–Bialystok, the once-idyllic Polish village whose Jewish population was systematically murdered under Hitler. Hundreds of miles away, Ruzya witnessed the effects of Stalin’s deadly dictatorship, growing up in a society defined by paranoia, betrayal and oppression. Though they came from different worlds, had temperaments quite distinct from one another, and would not meet until years later, Ester and Ruzya also had much in common: both loved learning and language, and eventually figured out how to use their translation skills as a precious means of survival; both lost their first loves to war; and both found themselves in Moscow at a time of virulent anti-Semitism. Once they crossed paths, Ester and Ruzya forged a trusting bond that became even stronger when Ester’s son married Ruzya’s daughter. Their granddaughter’s chronicle of the events that shaped their lives gives history a human face, resulting in a tale that is both intimate and epic in its scope.

The questions and discussion topics that follow are intended to enhance your reading of Masha Gessen’s Ester and Ruzya. We hope they will enrich your experience of her grandmothers’ marvelous story.

1. What does Masha’s prologue indicate about the concept of home and homecomings? What does she tell us about the ways in which politics, journalism, and family storytelling traditions affected her approach in writing this memoir?

2. Did Ester’s close community in Bialystok endow her with survival skills? How was her thinking influenced by her parents’ differing opinions about Zionism? How were they able to convey Judaism as the heart of her identity while also professing atheism?

3. What elements of Ruzya’s personality persist from girlhood through the rest of her life? Does she become as fearful as her father? What keeps her a skeptic, rather than becoming a fervent loyalist like Samuil?

4. How would you characterize Ester’s experience with Russia’s university system as she arrives in Moscow during the Great Terror? How did you react to the means by which she was tested? Is higher education in contemporary America free from discrimination? What are appropriate means for measuring scholastic aptitude?

5. Is Ester’s personality fundamentally similar to Ruzya’s? Would you have expected them to be incompatible had they not shared similar life experiences? Describe your most lasting friendships. How did they begin? Is it possible to know what really sustains them?

6. To what do you attribute the survival of Ester and Ruzya, as well as Bella, in the face of so many mass executions? Is survival a matter of luck, ingenuity, divine intervention, or other factors? Beyond surviving physically, what allowed these three women to keep a glimmer of their true selves alive as well?

7. Discuss the ways in which Ester and Ruzya experienced love and marriage. Their first loves, Isaj and Samuil, were both lost in the violence of war. Ester’s eventual marriage to Boris was a matter of pure survival. Anti-Semitism cut short other relationships. Yet neither woman became bitter about the possibility of romantic love. What accounts for this? What do their stories indicate about the realities of love?

8. In Part Four, dedicated to Jakub’s story, Masha reconstructs the conflicting accounts of her grandfather’s final days. How were you affected by the absence of certainty about these circumstances? How does the grieving process change when survivors are deprived of such certainty and detail? Would you have participated in an uprising had you lived in Bialystok alongside Jakub?

9. How did Chaika Grossman’s fate influence Ester’s opinion of the world, especially regarding the possibility of Israel? What does Ester’s daring telegram say about the power of language?

10. Near the end of chapter fourteen, Masha quotes ghetto survivors who expressed the possibility "that the Nazis hoped intolerable living conditions . . . would make the Jews ‘degenerate to the level of criminals.’ " What determines how populations will react in such circumstances? What power did the Nazi’s prisoners still possess while essentially trying to negotiate for their lives?

11. Discuss the theme of translation that recurs throughout the book. How are language and identity linked? What talents are required to be a proficient translator? What would it take to master the language of censorship?

12. How did Ester and Ruzya  differ in the ways they balanced the demands of  conscience versus necessity? What were the costs and benefits of the many compromises they made?

13. What are the modern-day equivalents of the Soviet ‘anti-cosmopolitan" campaigns? How did the death of Stalin affect Ester’s and Ruzya’s sense of security?

14. What new facts did you discover about Hitler’s war and Stalin’s peace while reading this memoir? What aspects seem underreported in popular histories of the twentieth century?

15. Though this is primarily the story of Masha’s grandmothers, the author’s experience is an essential component of the memoir. How are their lives reflected in hers? How does her sense of identity evolve between the prologue and the closing paragraphs? How does her work as a journalist compare to that of the many foreign correspondents who tried to report on the same events covered in Ester and Ruzya?

16. What future do you predict for Masha’s children? What sort of memoir might her grandchildren write about her? What world events would your grandchildren discuss in a memoir about you?

Unto the Sons
Gay Talese

A Century of Wisdom
Caroline Stoessinger

Dancing with the Enemy
Paul Glaser

Yours in Truth
Jeff Himmelman

Anatomy of a Miracle
Jonathan Miles

The Seamstress
Sara Tuval Bernstein
Back to Top