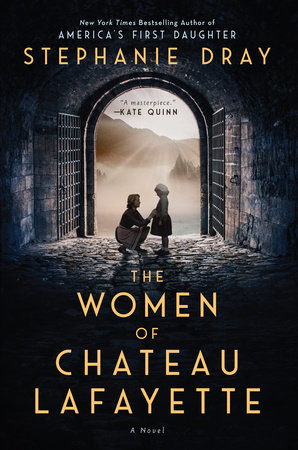 Readers Guide
The Women of Chateau Lafayette by Stephanie Dray

2. Of Adrienne’s many acts of courage, which one stands out in your memory the most? What do you think you would have done in her place?

3. In what ways can Adrienne be considered our French Founding Mother? And in what ways was Adrienne weaker or stronger than her war hero husband?

4. Beatrice Chanler was the wife of a millionaire. She could have stayed out of both world wars if she’d wanted to. Why did she fling herself into the war relief effort? And why did she feel so obligated to help children?

5. How would you describe Beatrice’s relationship with her husband, Willie Astor Chanler? What do you think was at the heart of the attraction? What about with Maxime? Do you agree with the choices Beatrice made? And in what ways did Beatrice’s friendship with Emily become more important than her romantic relationships?

6. It took Marthe a long time to translate her frustration, anger, and disgust at the Vichy regime into concrete action. That mirrors the experience of the French people’s slow-boiling fury at the situation that existed before the French Revolution. When is a person finally moved to act? And are younger people, like Marthe, quicker and more willing to take those risks?

7. How did Marthe change, grow, and mature over the course of the book, particularly with regard to why she should care about world events over which she felt she had so little control or influence? What about her determination to look out for me, myself, and I?

8. What moment in Marthe’s narrative stands out most strongly in your memory? What message do you take from her story?

9. Lafayette’s biographer, Laura Auricchio, wrote, “He lived in treacherous times and made imperfect choices. He failed at more ventures than most of us will ever attempt and succeeded at efforts that stymied countless men, but he never abandoned the belief that he could change the world, and he never despaired of success. Of all his accomplishments, these might be the most extraordinary.” The spirit of this thought is summed up by his motto, Cur Non, meaning Why not? This idea was embraced by all the women in this novel. Is this motto still relevant today? If so, how might it help you in whatever you’re facing?

10. In the novel, lavish settings—like Versailles before the French Revolution or posh galas in New York—are juxtaposed against the deprivation of war-torn France. How did this impact your emotions and experience as you were reading?

11. Did the novel make you curious to learn more about the history? Did you look anything up? If so, what and why?

12. Are there any historical lessons that you learned from the women in this book that you think apply to current events? How can we learn from history?
Learn More About The Women of Chateau Lafayette
print

So Much Life Left Over
Louis de Bernieres

The Fever Tree
Jennifer McVeigh
Back to Top