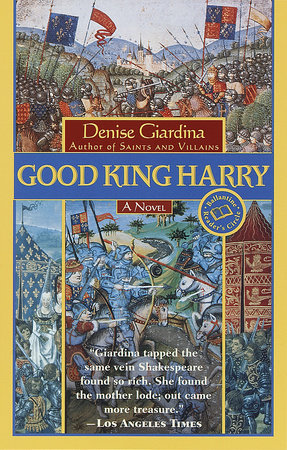 1. Why does Henry refuse to joust? Is it simply, as his father assumes, because Henry is too frightened after a traumatic childhood experience?

2. As a young boy, Henry’s uncle counsels him to rely upon the power of the new men–the great merchants–rather than on the knights and noblemen. Do you think this was sound advice? What impact does it have on Henry’s life and reign as well as the course of English history?

3. Discuss the code of chivalry in medieval Europe. Why does Henry reject it?

4. King Henry’s decision to protect his archers and use them to cut down French knights scandalized his own nobles. Discuss the clash between old and new modes of warfare in this novel.

5. The dying King Henry V says of his father, "His lengthy absences were no source of sorrow to me, for he made my life miserable with his presence." What were the sources of the long-running enmity between Henry and his father? How and why did they finally make peace with each other?

6. Prince Harry is very conflicted about assuming power. What eventually drives him to survive and prosper and take the throne? What are the keys to such success?

7. "I do pity you, that you must wear the Crown. It is a burden I do not want," says one of Henry’s subjects. Do you agree or disagree with this statement? Would you want such power and position for yourself?

8. All of the kings in this novel–Richard, Henry’s father, and then Henry himself–seem to be haunted men on whom leadership rests uneasily. Why do you think this is so? How would you judge the quality of their leadership?

9. Henry comes to believe that a strong leader who eliminates dissent can bring peace and prosperity to the land. What are the dangers of such absolute power? What has history taught us?

10. "Somehow I must learn why men fight, and I must stop them," muses Henry. Does Henry achieve his vision of a strong and united Europe?

11. Do you think his decision to conquer France is a wise one? What motivates it? Is it merely the desire to bring peace through war, or might other factors be involved?

12. Why was Henry so devastated by the assaults he was forced to lead on a rebellious Wales? How did he finally reconcile himself to subduing Wales, whatever the cost?

13. What made Good King Harry so popular with the common folk of England and even France? What qualities do leaders need to possess to attract a large popular following?

14. Discuss the many ways in which Henry’s reign challenged the hierarchy of English society.

15. Henry was often able to connive himself that the ends justified the means when he had to wage war or mete out punishment. What do you think? Were certain actions more justifiable than others?

16. After reading this novel, do you feel more sympathetic to leaders who must make hard decisions? Why or why not?

17. Did you find Henry’s relationship with Merryn convincing? Do you think a price and shepherdess would be able to find common ground?

18. How does Henry’s relationship with Merryn compare with his marriage to Katherine? Do you think Katherine mourned his death? What of her insinuation that their infant son was not really fathered by Henry?

19. Throughout his life, Henry accused his father of caring more for warfare and honor than for the welfare of this own family. But what of Henry’s relationship with his own wife and son? Do you think people are doomed to repeat their parents’ mistakes?

20. What reforms did the Lollards–the early Protestants, who included some of Henry’s closest friends–call for in the Catholic Church? Why were they labeled heretics, with the punishment being death?

21. Why was it illegal in medieval Europe for all but the clergy to read the Bible?

22. Do you think Henry’s sacrifices were worth it in the end? Does he?

23. On his deathbed, Henry seeks absolution for his sins. Do you think he is beyond redemption? What does he seem to think?

24. How does the world of medieval Europe compare with our own? Does it seem like a world that you would like to experience? If you could travel back in time, where would you go?

25. Which were your favorite characters and why?

26. Summarize this novel in a sentence or two. Can your group come to a consensus on this? Do you find that the various members of the group read books very differently and focus on different themes?

27. Why did your group select this novel? What will you be reading next?

The End of Innocence
Allegra Jordan

Stonehenge: A Novel of 2000 BC
Bernard Cornwell

The Woman at the Front
Lecia Cornwall

Mary Queen of Scotland and the Isles
Margaret George

The Exchange of Princesses
Chantal Thomas

The Memoirs of Cleopatra
Margaret George