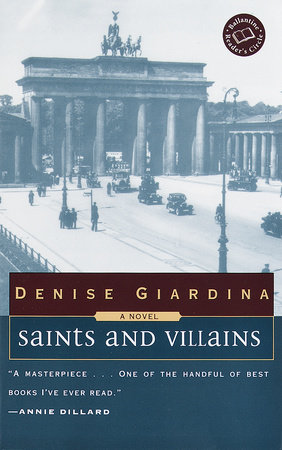 "Giardina . . . surpasses herself with this powerful re-creation of the life and martyrdom of German pastor and theologian Dietrich Bonhoeffer . . . A big novel in every sense of the word, and a triumphant portrayal of one of the century’s authentic heroes."
–Kirkus Reviews
"The story–compelling in and of itself–is engrossingly narrated, with an eye for significant detail, a strong sense of life’s bitter ironies, and a powerful feeling of immediacy. The characters, especially Bonhoeffer himself, are lifelike and complex. Giardina also does a fine job of evoking the temper of the times she portrays."
–Newsday

"In a series of telling scenes brought to life with unerring choice of detail . . . Giardina exerts an admirable grip on her panoramic story."
–Publishers Weekly

"Giardina creates a fictional account of Bonhoeffer that transcends the usual ‘historical novel’ as it becomes a dramatic meditation on the meaning of his life. Giardina breathes new life into Bonhoeffer. He is no longer the pristine icon of his worshipful admirers. Giardina makes him again a credible, though exceptional, person."
–Herald-Leader (Lexington, KY)

"Bonhoeffer becomes a nervous, sympathetic everyman who, when faced with inhumanity rises to greatness. Giardina makes the reportedly stiff, bespectacled intellectual . . . into a hero to whom any reader can relate."
–The Boston Globe

"[A] novel whose message of moral internationalism deserves to be read throughout the world . . . the images of Dietrich Bonhoeffer evoked in the pages of Saints and Villains are so vivid that the word that comes to mind is resurrection."
–Oregonian (Portland, OR)

"The story is an important one. The Bonhoeffer drawn by Giardina is a complex character."
–Republic (Phoenix, AZ)

"Giardina . . . succeeds in fleshing out Bonhoeffer’s factual biographies with fine and detailed human touches–the more ‘believable’ because they are based on diligent research."
–Philadelphia Inquirer

"Saints and Villains depicts a mental and physical adventure of one man. It is a treatise on man’s inhumanity to man and one person’s courage in rising above such horrors to find his own faith strengthened in the process."
–The Chattanooga Times

1.         This story raises important questions about personal responsibility in the face of inhumane behavior. What led Dietrich Bonhoeffer, a painfully shy and introspective man, to join the German resistance?

2.         Why does Bonhoeffer refuse to conduct the funeral service for his sister’s father-in-law? Discuss the impact this choice has on his life.

3.         This story illustrates how some people found the courage to challenge a corrupt and brutal regime. What did you know of the German resistance prior to reading this book? What factors do you think led some people to resist in the face of almost insurmountable odds?

4.         Bonhoeffer made great sacrifices yet he was always battling his fears and demons. As one reviewer has said: "Giardina makes [Bonhoeffer] the reportedly stiff, bespectacled intellectual . . . into a hero to whom any reader can relate." What does the face of courage look like in this book? How do you define courage and heroism?

5.         "He who believes does not flee." Bonhoeffer has opportunities to escape Nazi Germany yet he chooses to remain and fight. Why do you think is this so? In his place, what would you have done?

6.         As a religious leader, Bonhoeffer struggled to reconcile his faith with his eventual decision to join what was, in part, a conspiracy to murder. Did he rest easy with this decision? Under what circumstances, if any, is murder is justifiable?

7.         Discuss the impact of Bonhoeffer’s experiences in the United States on his later understanding of the plight of Jews in Nazi Germany. How is Bonhoeffer changed by his time abroad? How do his experiences in Harlem and on Gauley Mountain affect his actions upon his return to Nazi Germany?

9.         Why do Elisabeth Hildebrandt and Bonhoeffer separate? What forces drive them apart?

10.         Why do you think Alois Bauer ultimately tries to save Bonhoeffer? What might account for the very different paths these two men have chosen?

11.         There are no simple villains in this story. How do you understand the very patriotic German couple that sent their son off to fight for Hitler, yet also befriended Elisabeth in her time of need?

12.         As this story illustrates, the rise to power of Hitler and Nazi Germany was facilitated by compromise and accommodation in the international community. Why do you think this was so? Why did a dissenting voice such as Bonhoeffer’s get lost or shouted down?

13.         Many people would wonder what kind of God would allow something like the Holocaust to happen and would lose their religious faith in the wake of the Holocaust. How does Bonhoeffer address these issues and maintain his faith? How does the nature of his faith change over the course of his lifetime?

14.         The tremendous scope of death and destruction in the Holocaust can be difficult to comprehend. How did this man’s story help you to process such acts of unimaginable evil?

15.         Bonhoeffer once said, "We must live as if God does not exist." What was this minister and theologian trying to tell us with this statement?

16.         In this story, Mozart’s Mass in C Minor (the original manuscript of which was lost during the war) plays a pivotal role. Recently there has been much news coverage of renewed attempts to retrieve art and money lost during World War II. How do we assess blame in such situations? Who should be held accountable for such losses?

17.         Which characters, besides Bonhoeffer, did you find to be the most compelling and why?

18.         Why did your group choose to read this particular work? How does this novel compare with other works your group has read?

About Denise Giardina Denise Giardina is the author of Good King Harry, Storming Heaven, and The Unquiet Earth. The Unquiet Earth won Berea College’s Weatherford Award for outstanding writing about Appalachia as well as the American Book Award and the Lillian Smith Award for the year’s best Southern fiction. She was born in Bluefield, West Virginia, and grew up in a coal camp. A graduate of West Virginia Wesleyan College and Virginia Theological Seminary, Giardina teaches English and literature at West Virginia State College in Charleston, West Virginia. She is a licensed lay preacher in the Episcopal Church.
Learn More About Saints and Villains
print

When All the World Was Young
Ferrol Sams

Watch for Me on the Mountain
Forrest Carter

The Complete Novels of Jane Austen, Volume I
Jane Austen

The Passages of H.M.
Jay Parini

Nowhere Else on Earth
Josephine Humphreys

Metropolis
Elizabeth Gaffney
Back to Top