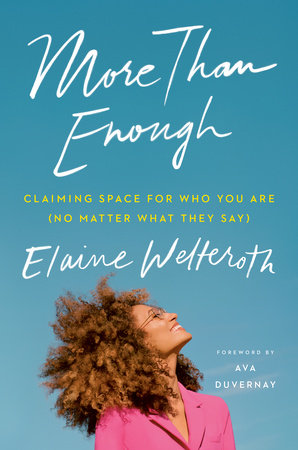 In this part-memoir, part-manifesto, the revolutionary editor who infused social consciousness into the pages of Teen Vogue explores what it means to come into your own—on your own terms. Throughout her life, Elaine Welteroth has climbed the ranks of media and fashion, shattering ceilings along the way. In this riveting and timely memoir, the groundbreaking journalist unpacks lessons on race, identity, and success through her own journey, from navigating her way as the unstoppable child of an unlikely interracial marriage in small-town California to finding herself on the frontlines of a modern movement for the next generation of change makers.

Welteroth moves beyond the headlines and highlight reels to share the profound lessons and struggles of being a barrier breaker across so many intersections. As a young boss, and often the only Black woman in the room, she’s had enough of the world telling her—and all women—they’re not enough. As she learns to rely on herself by looking both inward and upward, we’re ultimately reminded that we’re more than enough.

1. Welteroth writes about how her experiences growing up as a young girl and not seeing people like her represented in magazines affected her journey to becoming someone who oversees the creation of magazines. In what ways has your journey shaped your goals? In what ways has it inspired you to fight for what you want?

2. The world often tells people—especially women—that they aren’t enough. In what ways was Welteroth told she wasn’t enough throughout her life? What does being more than enough mean to you?

3. Welteroth writes about research that has found that a young girl’s confidence peaks around the age of nine and declines as they grow older. Why do you think this is? What advice would you give to those who are struggling with confidence and self-image?

4. In More Than Enough, Welteroth writes about leaving a couple of difficult relationships. What relationships of yours, romantic or otherwise, have affected your journey?

6. What does it mean to be what Shonda Rhimes has called an FOD (First. Only. Different.)? Are there pressures that come with that identifier? What about opportunities?

7. More Than Enough explores how Welteroth’s biracial identity influenced her journey to finding her voice. Why is it important to create environments that encourage intersectionality and healthy conversations around race in both personal and professional spaces? What steps can we all be taking to accomplish this?

8. As editor-in-chief at Teen Vogue, Welteroth and her team helped infuse the magazine with social consciousness and transformed it into a key source for young people interested in news and politics. In recent years, have you noticed a change in messaging from other media outlets or influential people you follow? Do you think that public life is becoming increasingly political? Why or why not?

9. There are a lot of different depictions of success in the world, and especially on social media, something Welteroth writes about in More Than Enough. What does success mean to you and how have you defined it for yourself on your own terms? How does social media impact our feelings about what it means to be successful?

10. Welteroth dedicated More Than Enough to, among others, “the ones who are Next Up.” Who does she mean by this, and how has she worked to help give these people a boost throughout her personal and professional journeys? What advice do you have for people who want create positive social change?

Once More We Saw Stars

The Beauty in Breaking

Love Is a Mix Tape

Wow, No Thank You.
Back to Top