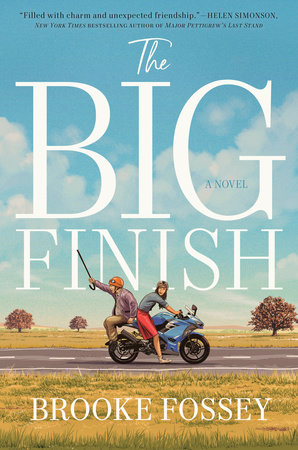 1. Though Duffy and Carl are very different men, they’ve managed to form an inseparable bond. Do you think their friendship is merely a result of necessity and proximity, or do you think that under different circumstances, they would’ve found kinship in each other? What about the other friendships in the book?

2. How is fatherhood defined throughout the story? How does the absence or presence of fathers impact different characters’ lives? Though all are flawed, which father from the book would you most like to have, and why?

4. Josie’s journey to sobriety is unfinished at the book’s close. How tumultuous do you expect her recovery to be? Do you think Anderson will play a lasting part in it? Do you want him to?

5. God’s existence is a reoccurring question that Duffy and Josie both ask. What are the pivotal moments that lead Duffy to form his ultimate conclusion? When imagining Josie’s life beyond these pages, do you think her formative week with Duffy will lead her to have a similar or opposite belief?

7. Do the characters meet your expectations of how they should think and act, considering their age? Has Duffy, or any of the characters, changed your perspective about people older—or younger—than you? If so, how?

8. When Duffy speaks about the staff’s apathy toward the antique pocket pistol in his dresser, he states, “People seemed to believe its age devalued its purpose.” Discuss the gun’s role in the story as an allegory. Consider its life span, from the time it was forged to when it fired its final bullet.

9. If Duffy had more time with Alice, do you think he would’ve had a chance with her? How do you feel about Alice holding on to her husband beyond the vow “until death do us part”? In your mind, is there an age limit to romantic love?

10. Alice tells Duffy, “Whatever it is you’re mourning from back when, don’t. It brought you here, now, to do what you’re doing, and what you’re doing is honorable and right.” Do you agree with her positive outlook when it comes to playing life’s long game? What other story lines validate her philosophy?

11. In time, Duffy becomes certain that in order to survive the loss of a loved one, you have to believe that there are two different parts of every person: the stuff that ends up in the ground, and the stuff that doesn’t. Do you agree with Duffy? If not, how does your own belief of the afterlife shape your handling of such a loss?

12. What does the title mean to you? In a perfect world, at the end of your life, what does your big finish look like?
Learn More About The Big Finish
print

She Gets That from Me
Robin Wells

The Secret of Clouds
Alyson Richman
Back to Top