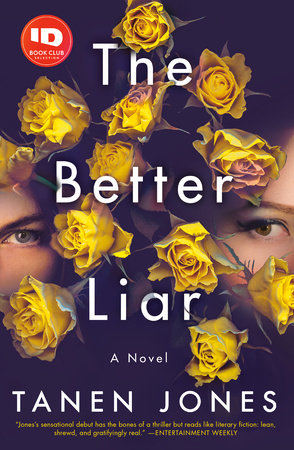 In order to provide reading groups with the most informed and thought-provoking questions possible, it is necessary to reveal important plot details. If you have not finished reading The Better Liar, we suggest that you wait before reviewing this guide.

1. What were your first impressions of the two main characters, Leslie and Mary? Did they turn out to be accurate in any way?

2. Robin narrates episodes of her and Leslie’s childhood throughout much of the book. Why do you think Robin chooses to communicate directly with the reader in this way?

4. Through Robin’s and Leslie’s memories, we see glimpses of their mother, whose life and death comes into greater focus over the course of the book. Did you see any parallels between Christine’s life and that of the two sisters?

5. Leslie and Robin often remember or interpret the same event in very different ways. For example, Leslie’s initial recollection is that Robin pushed her away after their mother’s death, whereas Robin recounts a memory of Leslie forcing her to sleep in the guest bedroom the night of their mother’s funeral. Have you ever recalled an event completely differently than another family member did? Why do you think this phenomenon occurs?

6. Many of Leslie’s actions are driven by shame. What do you think of shame surrounding motherhood and mental illness? What could be done to lessen it?

7. Leslie and Robin’s father was often absent and their mother was not reliable, which meant that much of Robin’s care fell to Leslie. How do you think Leslie’s later feelings about motherhood might have been affected by her “parentification” at a young age? How do you think Robin was affected by being parented primarily by a sibling?

8. Nancy plays a classic noir role in this book—that of the corrupt police officer who begins sleeping with the femme fatale. What do you think of this relationship? Can a relationship built on a lie ever be a healthy one?

9. When Leslie expresses frustration with their mother’s depression when Robin is eight, Robin “fixes” the situation by murdering their mother. We can see at novel’s start that Robin has not moved beyond this problem-solving method, choosing to allow her ex-boyfriend’s girlfriend Rachel to die in order to show him the error of his ways. Confronted with Leslie’s problem, Robin suggests that an easy solution would have been to kill Eli. But at the end of the novel, instead of killing someone, Robin decides to force Leslie into psychiatric care. Do you think this represents a kind of growth on Robin’s part? Why do you think she makes this choice?

11. Did you have a favorite character? If so, who was it and why did you like them?

12. What about The Better Liar surprised you most? Did you identify with any of the characters? If so, why?

Who Did You Tell?
Lesley Kara

The Wolf Wants In
Laura McHugh

Death in the Family
Tessa Wegert

The Evil Men Do
John McMahon

Safe in My Arms
Sara Shepard

Firewatching
Russ Thomas
Back to Top