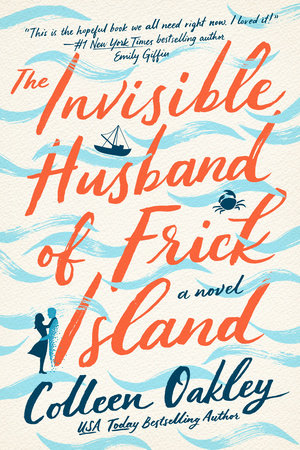 1. Frick Island is certainly an unusual place. Why do you think the author chose to set the book on this island? Have you ever been to a remote island like Frick? What was it like?

2. At the end of chapter 1, Tom returns home—or at least seems to: “He was going to come home. Of that one thing, Piper was sure. And then one morning, just like that, he did.” What did you think when you read that last line? Did you think he had actually returned or something else?

3. When we first meet Anders, he appears to be single-mindedly driven by his career and success, as many young twentysomethings can be. What does success mean to him at the start of the story? Do you think his viewpoint changes over the course of the book?

4. At one point, Pearl muses that the different ways people grieve are “as varied as the waves that lapped up on Graver’s Beach at the far end of the island.” Do you think that’s true? Has grief ever surprised you in the way it’s manifested itself in your life?

5. The author uses flashbacks every few chapters to offer a glimpse into Piper and Tom’s relationship. Do you feel like you got to know them as a couple? What do you think of their relationship?

6. Within the community of Frick Island, there are lots of distinctive personalities: BobDan, Pearl and Harold Olecki, Lady Judy, Mr. Gimby, Dr. Khari, Jeffrey. How are they similar and different? Did Anders’s feelings toward them change over time as he got to know them? Did yours?

7. Anders returns to Frick Island hoping to do a story on climate change and its effects on the island. How does climate change—and whether people believe in it or not—fit into the bigger themes of the novel?

8. In his research on Piper’s “condition,” Anders learns about post-bereavement hallucinatory experiences, or PBHEs. Have you ever heard or seen a loved one after they passed?

9. In chapter 11, Anders realizes that between “climate change, mental health issues, maybe even drug trafficking . . . Frick Island was a microcosm for so many issues people faced all across the country.” Do you think that’s true? Why or why not?

10. When Anders first “encounters” Tom face-to-face at the marina, he has to decide whether he will go along with the charade and speak to a man who doesn’t exist. What do you think would have happened if he had chosen not to greet Tom? What would you have done?

11. At one point, Anders asks Piper what she misses about living on the mainland. What do you think you would miss? What would you enjoy about living somewhere like Frick Island?

12. When Anders realizes that the nearing completion of the cell tower will allow the islanders to hear his podcast easily at any time, he panics. Do you think he was deceptive about the content of his podcast on purpose? How could he have handled it differently?

13. When Pearl finally tells Anders how and when the town decided to go along with Piper’s delusion, she says: “It’s amazing what people will do for the ones they love.” Have you experienced any examples in your own life that exemplify this idea?

14. Why do you think it takes Anders so long to realize he’s in love with Piper?

15. This book explores the theme of faith, how it can sometimes be hard to understand why another person believes something so different from your own beliefs. In Anders’s final podcast, what does he conclude about those differences? How have his thoughts on faith and belief changed over the course of the novel?
Learn More About The Invisible Husband of Frick Island
print

Every Now and Then
Lesley Kagen

Hell of a Book
Jason Mott

What Are You Going Through
Sigrid Nunez

It Is Wood, It Is Stone
Gabriella Burnham

A Month of Summer
Lisa Wingate

The Magic of Ordinary Days
Ann Howard Creel
Back to Top