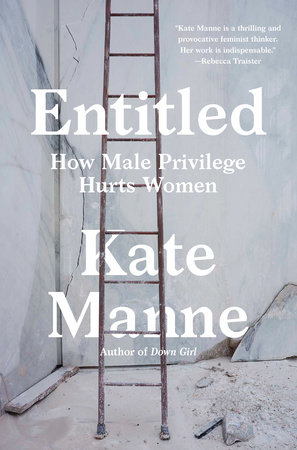 1. In the opening of Entitled, author Kate Manne describes misogyny as “the shock collar worn by a dog to keep them behind [an invisible fence],” while she describes sexism as “the beliefs, ideas, and assumptions that rationalize and naturalize patriarchal norms and expectations.” What do you make of this distinction? What do you see to be the main differentiating factors between misogyny and sexism?

2. Manne repeatedly returns to her definition of misogyny, described plainly as: “the hostility girls and women face, due to patriarchal forces, rather than the hostility men feel, deep down in their hearts.” Why do you think women feel this hostility so acutely despite the fact that many men don’t intentionally or consciously harbor it? Given that misogyny is so often exerted via amorphous patriarchal forces, rather than by individual actors, how can individuals make a difference?

3. In chapter 5, the author explains how women—most significantly, women of color—often receive substandard healthcare because they aren’t believed when describing their pain to their doctors. Do you know anyone who has experienced this? Has this ever happened to you? Do you agree with the author’s argument that this injustice occurs because society views women as “entitled to provide care, but far less entitled to ask for and receive it”?

4. Consider Tressie McMillan Cottom’s harrowing ordeal, outlined in chapter 5, when she went into premature labor with her daughter. What did you find most striking about the discrimination that women of color or non-cis women face when seeking medical care? Do you see any solutions?

5. When discussing the inequitable division of child-rearing and housekeeping labor in typical heterosexual relationships, the author argues that while a large portion of this inequity is due to men’s negligence and entitlement to female labor, it is partly due to women’s socialization, too: “Some women may not feel entitled to equitable domestic arrangements and leisure time for themselves, on par with that of their husbands. Or they may feel entitled to this in theory, but unable to insist in reality, given the social forces around them that tell them not to insist, and to ‘take one for the team’ in perpetuity.” Do you agree? Why or why not? How have the women in your life been socialized to act?

6. In chapter 4, Manne raises several questions: “Why, and how, do we regard many men’s potentially hurt feelings as so important, so sacrosanct? And, relatedly, why do we regard women as so responsible for protecting and ministering to them?” Discuss how you might answer these questions. Do you feel there is an answer?

7. The author discusses many high-profile instances of sexual coercion and sexual violence in chapters 3 and 4. A few key examples include the viral “Cat Person” short story published in The New Yorker in 2017, the accusation against comedian Aziz Ansari, and the many rape allegations against former Hollywood film producer Harvey Weinstein. What are the similarities and differences between these examples? Consider the public reaction to each. Why do you think public sentiment was so disparate?

8. How do juvenile offenders—who, the author argues, often do not understand the implications of their actions—complicate the issue of sexual violence and coercion?

9. Manne writes that when women are seeking positions of power, they are liable to be considered “conniving, pushy, selfish, abrasive, manipulative, and untrustworthy.” Why do you think power-seeking women are described in this coded way but not men? Do you think these words have a different implication when used for women? What words would you use to describe a man acting in the same way? Which words are similar and which are different?

10. “Mansplainers,” according to the author, are men who feel entitled to be “the one who dispenses information, offers corrections, and authoritatively issues explanations.” In other words, they expound their views over another’s (often a woman’s) cogent and sometimes expert. The author, as a philosopher, and her female colleagues must experience this frequently in academic settings. Where outside of academia do you see mansplaining occur? Have you or someone you know ever encountered this? How did you react?

11. The author describes how anti-abortion regulation and anti-trans bathroom bills are wielded in similar ways, both with the end goal of controlling cis- and transgender women’s bodies. “There is a prevalent sense of entitlement on the part of privileged men to regulate, control, and rule over the bodies of girls and women—cisgender and trans alike. And, as the direct result of this, those subject to such misogynistic policing are often impugned as moral monsters, even though they’re the ones being made to suffer horribly.” How do you see these two seemingly disparate political issues as similar? What do you consider to be the source of this entitlement to the regulation of female bodies?

12. While many anti-abortion advocates are white men, some of the most vehement supporters are white women. Why do you think that is? How are women of color impacted by these regulations compared to white women? What is at stake with the many “heartbeat bills” that have been passed by state legislatures in the United States in recent years?

13. The author wrote much of Entitled while pregnant with her first child. When she and her husband learned they were having a girl, she wrote that it was “difficult to reconcile the desires we naturally have for our child with a sober acknowledgement of the realities of misogyny and the male entitlement that often gives rise to it.” Alongside this fear of raising a girl, she expresses relief that she isn’t having a boy: “The prospect of raising a boy to be confident and joyful, yet appropriately mindful of his own privilege, seemed like a particularly daunting moral challenge.” What do you make of the author’s raw reactions? Discuss the challenges related to both scenarios. How would you navigate these difficulties?

14. Of the eight entitlements Manne outlines in the book, which was the most compelling to you? The most surprising? Were there any you disagreed with? Why?

15. Despite the frustrating nature of the topics discussed in Entitled, the author ends on a brighter note. She says that while she is “still far from hopeful,” she is “not so despairing anymore.” Do you share this hope (or at least this diminishing despair)? Why or why not?
Learn More About Entitled
print

The Rage of Innocence

Tomorrow Will Be Different

The Second Sex
Back to Top