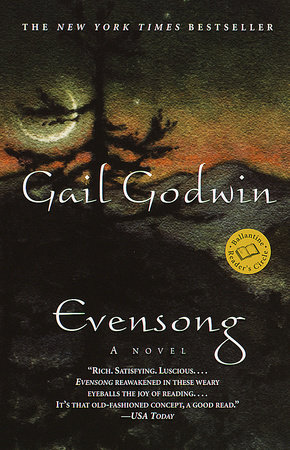 To read Gail Godwin is to touch the very core of human experience. With inimitable grace and aching emotional precision, Godwin probes our own complexities in characters whose lives oscillate between success and struggle, stoic resolve and quixotic temptation, bitter disappointment and small, sacred joys. Now with Evensong, she again translates our everyday existence into soul-touching truths as she brings to brilliantly realized life the people of a small Smoky Mountain town–and a woman whose world is indelibly altered by them.

"A DEEPLY CONSIDERED, EVEN DIGNIFIED NOVEL . . . One stays engaged with the story for sheer narrative hook: As with story lines from Dickens . . . you simply want to find out who does what to whom. . . . The final beauty of Evensong is its ability to address God–to address the mystery of faith by comprehending, then embracing, this premise of uncertainty itself."
–The Boston Sunday Globe

"EVENSONG LINGERS IN THE MIND. . . . Meticulousness and precision are, indeed, Godwin’s greatest strengths. In matters liturgical and clerical, her command is impeccable."
–The New York Times Book Review

"[A] SENSITIVE, PERFECTLY PACED NOVEL . . . A story full of fresh, spiritual wisdom . . . Smashing one of the strangest taboos in American literature, Godwin may have finally brought religion back from the wilderness and made it a safe subject for literary fiction."
–The Christian Science Monitor

"[A] RICH NEW NOVEL . . . with the narrative verve and moral gravity that made earlier novels of hers so appealing."
–Christopher Lehmann-Haupt
The New York Times

1. Is Evensong a religious book, a book about religion, or neither?

2. Was the profession of the heroine a plus or a minus in your own reading of the novel? Did you find it difficult to empathize with a minister who was female, or with a female who was a minister? Would men and women have different answers to this question?

3. Did you feel that Gail Godwin was writing from serious religious convictions?

4. Were you convinced by Margaret’s thoughts about her calling as she went about her daily tasks? For example, how do you think she handled crises such as Helen Britt’s tragedy or the dying Shaun asking if there were an afterlife?

5. How did you feel about the burning of the church at the end of the novel? Was there a message there?

6. Is Gail Godwin’s most important topic women’s search for identity? What are the women–Margaret, Gus, Grace, Madelyn, Helen Britt– in Evensong searching for?

7. On page six, Godwin writes, "Mothers and fathers go away and never come back." Are the departing parents (Margaret’s mother, Adrian’s father, Grace Munger’s parents, Chase Zorn’s and Father Mountjoy’s parents) running away from their lives or toward something they perceive as salvation? Is anything positive accomplished by their flight? What do their abandoned children have in common? What do the unrepentant Chase and the obsessively competent Jennifer have in common? With such a large number of families split up in different ways, does the sudden appearance of Tony seem contrived or unrealistic? And how would you have handled the situation if you had been Margaret and Tony had revealed his secret to you?

8. Grace Munger’s aggressive, evangelical Christianity, which confronts the world with a "he who is not with me is against me" style of rhetoric, is contrasted vividly with the faith of the conscientious but quiet Margaret. Is this contrast at the heart of the book? Godwin’s story unfolds within the confines of a fairly ordinary community with the usual troubles and conflicts. Is Grace Munger put into the story to shake up the complacency of the community? Is she following a genuine call to assert the presence of God in High Balsam at the time of the millennium?

9. Does the reader get to know Adrian Bonner enough to know where his religious sympathies fall? Is he too cerebral to become a satisfactory husband for Margaret? Does he elicit your sympathy or your exasperation?

10. "The gift of your art goads and inspires me to risk further narrative adventures of my own," says Margaret to her twenty- year- old daughter near the conclusion of Evensong. What narrative adventures do you envisage for Margaret if Godwin should ever decide to write a sequel? Does reading Evensong cause those of you who haven’t read its prequel, Father Melancholy’s Daughter, to want to find out more about how Margaret Bonner became the person she is, or have you learned all you need to know about her as a woman and a minister? If you have read both volumes, did Margaret mature as you might have expected from the young woman you met in Father Melancholy’s Daughter? Would you recommend this novel to a friend who has no interest in any kind of organized religion or belief in a higher being? If so, why?

ABOUT THE AUTHOR Gail Godwin was born in Alabama, grew up in Asheville, North Carolina, and received her doctorate in English from the University of Iowa. She has taught at Vassar College and Columbia University and has received a Guggenheim Fellowship and the 1981 Award in Literature from the National Academy and Institute of Arts and Letters. Her short stories, essays, and articles have appeared in numerous magazines and newspapers. Three of her critically acclaimed novels, The Odd Woman, Violet Clay, and A Mother and Two Daughters, were nominated for the National Book Award. Her other highly praised books include The Good Husband, A Southern Family, The Perfectionists, The Finishing School, and Father Melancholy’s Daughter.
Learn More About Evensong
print

The Last of the Menu Girls
Denise Chávez

Love Me Back
Merritt Tierce

Rules of the Wild
Francesca Marciano

Our Lady of the Forest
David Guterson

Where Women Are Kings
Christie Watson