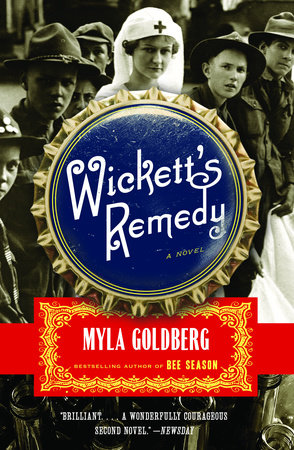 “Her second novel is of a piece with [Bee Season] in its invention and stylistic skill. . . . A warmhearted, unusual and intelligent consideration of a world about which few people know.”
—San Francisco Chronicle

The introduction, discussion questions, suggestions for further reading, and author biography that follow are designed to enhance your group’s discussion of Wickett’s Remedy, Myla Goldberg’s haunting follow-up to her bestselling Bee Season.

Set in Boston in the early years of the twentieth century, Wickett’s Remedy follows the shifting fortunes of Lydia Kilkenny, who dreams of rising above the limitations of Southie, the hardscrabble Irish working- class neighborhood where she was born.

When Lydia takes a job at Gilchrist’s department store on Washington Street, she enters a glittering world that is just across the bridge from Southie, but worlds away, culturally. Here she meets the shy and refined Henry Wickett, a medical student from a Boston Brahmin family who falls in love with Lydia’s vibrant enthusiasm. They marry, and Lydia’s dreams of a more elegant and cultured life seem to be coming true. But then Henry announces that he’s quit medical school to create a mail-order patent medicine called Wickett’s Remedy, a kind of placebo accompanied by a consoling letter from Henry for all those whose illness is, at bottom, loneliness. Before the business can take off, however, the Spanish Influenza epidemic of 1918 breaks out and claims Henry as one of its first victims, sending Lydia back home to Southie in a disorienting grief. The calamity of the epidemic is compounded by America’s entrance into World War I. Lydia’s beloved brother Michael joins the fight, leaving her doubly bereft. The flu begins to ravage Boston, turning the city into a nightmare of fever, panic, and agonizing death. Impulsively, Lydia volunteers at a hospital that is unable to keep up with the rising tide of the sick and dying. While caring for others, she finds a solace for her grief and a higher purpose for her life. The next day, she answers an ad for a heroic and highly dangerous experimental study to discover how the flu is transmitted—and how to stop it.

Vividly evoking this tumultuous historical period—through contemporary newspaper accounts, a chorus of otherworldly commentators, and Goldberg’s own masterful narrative skills—Wickett’s Remedy offers an extended meditation on sickness and health, memory and imagination, and the dream of progress.

1. How does Myla Goldberg re-create the city of Boston in the early 1900s? What descriptive details bring this era to life?

2. What role do the ghostly voices in the margins of the text play in Wickett’s Remedy? What kinds of commentary do they offer on the story? Why has Goldberg added this supernatural layer to her narrative?

4. After one day of volunteering at the hospital, Lydia announces: “I am meant to be a nurse. I am as sure of this as I have ever been about anything” [p. 200]. Why has helping the sick been such a compelling and transformative experience for her? How is her personal history related to this choice?

5. Henry and Lydia are quite different from one another. They come from vastly different neighborhoods and social classes and are dissimilar temperamentally and physically. What draws them together? What does each see in the other? In what ways do they complement each other?

6. What do the newspaper articles inserted into the text add to the story? What do they reveal about the temper of the times?

7. How does the story of QD Soda relate to the main narrative? What kind of man is Quentin Driscoll? Why does he cheat Lydia out of her share of the profits from QD Soda?

8. When Lydia sees Percival Cole’s corpse, she thinks: “A corpse was a dead animal. They were all nothing more than animals, bloated by vanity into wearing clothes and ascribing lofty purposes to their actions, when in reality they all died the same dumb death that awaited any overworked nag—limbs stiff, features frozen in a rictus of shock and pain” [p. 342]. What has brought Lydia to such a despairing view of human beings? Is she right about human vanity and pretension? In what ways was World War I an attempt to clothe base instincts in lofty purposes?

9. What is the attitude toward the war evinced in the novel? Why are Michael and his brothers so eager to join the fight?

10. In what ways do the characters in Wickett’s Remedy and the era in which they live seem innocent compared to today? How do their views of sex, love, family, and duty differ from our own? In what ways are they similar?

11. What are the pleasures and rewards of reading historical fiction? What can a fictional narrative of a historical event or period give readers that a conventional historical account cannot?

12. How does Lydia change over the course of the novel? Is she fundamentally different at the end from how she is at the beginning?

13. One of the doctors at Gallup’s Island says of Lydia, “The girl doesn’t know how to play bridge. She eats bacon like it’s filet mignon. She washes her clothes by hand rather than send them to the laundry. . . . And that accent!” [p. 285]. What ethnic and class prejudices are revealed in this assessment? To what extent is Lydia able to overcome these
prejudices?

14. What does Wickett’s Remedy reveal about early-twentieth-century ideas of social, scientific, and commercial progress?

Myla Goldberg is the author of the bestselling Bee Season, which was named a New York Times Notable Book in 2000 and made into a film, and, most recently, of Time’s Magpie, a book of essays about Prague. Her short stories have appeared in Harper’s Magazine, McSweeney’s, and failbetter.com. She lives in Brooklyn, New York.

Down to a Soundless Sea

The Echo of Twilight
Back to Top