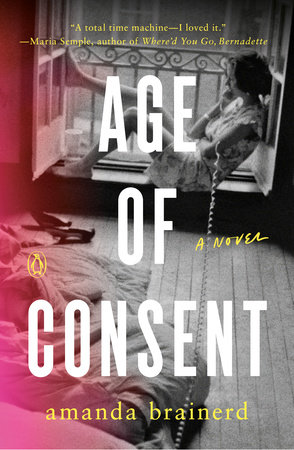 An Introduction to Age of Consent

“Justine’s outfit would blow Eve’s red mini out of the water. Eve knew it wasn’t a competition, but she had imagined herself as the sophisticated city girl, showing her ingenue friend around her glittering hometown. Now there was a crazy curfew and Justine was exquisite. But she always was. Eve needed to get used to being a Picasso next to a Botticelli.” (p. 72)

When Justine and Eve meet at Griswold Academy, they feel an instant kinship—two artsy outsiders in a Waspy, New England boarding school. It’s 1983, New York’s contemporary art scene is blowing up, and the girls are in their sophomore year of high school, confined to the overly manicured school grounds. Together, they cavort around campus, meet boys, make art and risqué bets, and sneak into a David Bowie concert.

Despite their strikingly different backgrounds—Justine, raised by theater-running bohemians in New Haven; Eve, the daughter of wealthy Park Avenue art collectors—the girls form an intense bond as they try to navigate the rules of boarding school, the whims of boys, the pressures of parents, and the heady desires of adolescence. In each other, they find much to love—and to envy: Justine longs for Eve’s high-society life in New York, while Eve craves Justine’s sexual experience and signed smoking permission form.

Over the summer, the girls join India, Eve’s childhood friend, in a season of growth, independence, and abandon. Justine gets a job in the city and becomes even more embedded in her friends’ glamorous lives. She moves into an empty room in India’s apartment in Hell’s Kitchen and carries on a relationship with Clay, the son of a famous but destructive artist. Eve works at a gallery in SoHo, where the combination of her ambition and family connections creates conflict with her boss. All the while, India grapples with her mother’s suicide, turning to her mother’s lover for comfort and care.

From the pristine Connecticut hills to the wild clubs on the Lower East Side to the neglected mansions in the Hamptons, the girls throw themselves at the world, trying to shape it while trying to find their place within it. Amanda Brainerd embodies the angst and verve that is so familiar to the teenage experience, giving us a clear-eyed glimpse into the murky psychology of girls who are made to grow up too fast, the adults who failed them, and a dangerous, dazzling era.
Questions for Discussion
1.     Discuss the title of the novel. Why do you think the author chose this title? How is it related to the story?

2.     What do we mean when we say “consent?” How does it concern the characters in the novel?

3.     Discuss the role of parenting in the novel. What do you think of Justine’s parents’ style vis-à-vis Eve’s? Do you think some of the parents in the novel are better than others? How is parenting different today?

4.     How does the shift from Griswold Academy to New York City change the characters? What happens to the girls’ conflicts and tensions when they go from a highly monitored environment to the lawless land of the city?

6.     The novel inhabits the minds of Justine, Eve, and India. Did this glimpse into the teenage perspective remind you of your adolescence? Which aspects of the young women’s experiences with parents, teachers, jobs, obsessions, sex, drugs, and boys resonated most strongly with your own teenage years? Which parts felt foreign?

7.     What role does money play in the novel? Are the characters’ relationships with one another influenced by money? To what extent does money give people power over others?

8.     How would you characterize Eve and Justine’s friendship? How does it change over the course of the novel? What draws them to each other? When and why do cracks begin to form in their friendship? And what do you think makes teenage friendships like theirs so intense?

9.     Eve, Justine, and India were all involved with older men at one point or another. With time and perspective, how do you think they will come to understand these relationships? Do you think some of their experiences will be more scarring than others?

10.  What do you make of the disintegration of Justine and Clay’s relationship? Did you empathize with Clay? How do you feel about the treatment of his father?

The Woman Who Stole My Life
Back to Top