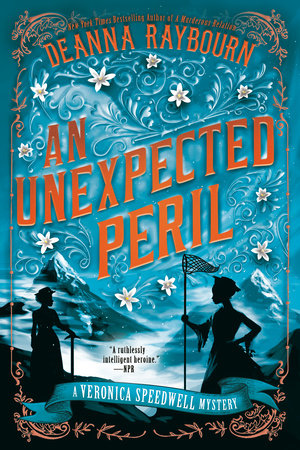 1. Veronica and Stoker’s relationship has evolved over the course of six books. How would you characterize their relationship now?

2. Veronica is impulsive and intrepid. Are these strengths or weaknesses in her character?

4. Alice Baker-Greene is inspired by real-life mountaineers such as Fanny Bullock Workman and Annie Smith Peck. What challenges did they face as climbers? As suffragists?

5. Veronica and Stoker live in a world that struggles to adapt to modern technology. How is that similar to the struggles we face in the twenty-first century?

6. Princess Gisela faces the conflicting demands of heart and head. Do you think she chooses wisely in how she balances the duties of a head of state with her personal inclinations?

7. Veronica meets another member of her family in this adventure. How would you characterize Empress Frederick?

8. Veronica makes a difficult choice with regard to meeting her father. Did she make the right choice under the circumstances?

9. Veronica chose to participate in a masquerade that proves dangerous. If she knew at the beginning what would happen, do you think she would have acted differently?

10. How do their dangerous adventures affect Veronica and Stoker’s relationship? Does peril bring them closer or do you think it is driving them apart?
Learn More About An Unexpected Peril
print

The Hollow of Fear
Sherry Thomas

Revenge in Rubies
A. M. Stuart

City of Lies
Victoria Thompson
Back to Top