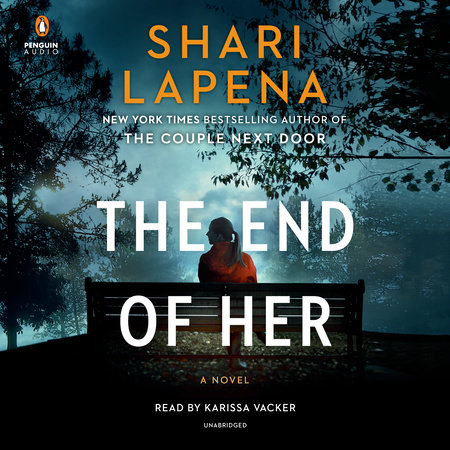 print
The End of Her Reader’s Guide

An Introduction to The End of Her

In the quiet upstate town of Aylesford, New York, Stephanie and Patrick Kilgour are adjusting to their sleep-deprived lives with colicky twins. Emma and Jackie are a handful, but Stephanie doesn’t mind putting her career on hold to be a stay-at-home mom, while Patrick does the nine-to-five as an architect to support their growing family. When Erica Voss, a woman from Patrick’s past, reemerges unexpectedly, raising questions about the death of Patrick’s first wife, Stephanie supports her husband wholeheartedly. She knows that Lindsey’s accidental carbon monoxide poisoning in Colorado all those years ago was just that—an accident. But Erica is persistent, and threatens to go to the Denver police; meanwhile, Stephanie begins to realize that some of the accusations Erica spouts about Patrick seem to have the ring of truth. Soon, the Kilgours’ marriage starts to crumble, and Stephanie isn’t sure what—or who—to believe.

Just like Lapena’s previous suspense novels, The End of Her is brimming with hair-raising tension at every turn, and readers will be kept guessing until the very last page.

1. Much of the narrative takes place within Stephanie’s own mind: how overwhelmed and exhausted she feels, what she expects Patrick will do, and the doubts raised by Erica’s appearance. Did you think Lapena successfully created a believable internal monologue for Stephanie? Explain why.

2. When Patrick has the polygraph done, we learn that the results can be faked—something Patrick unsuccessfully attempts to pull off. When Stephanie hears the results of the test, realizing what Patrick has done, she collapses in shock and fear, then immediately flies home. Do you think her reaction was warranted? Why or why not?

3. Erica arrives on the scene in Aylesford, and when she realizes Patrick won’t bend to her will, she doubles down and approaches Stephanie, sowing seeds of doubt in her mind about Patrick’s past. At what point, if any, did you start to believe Erica might be telling a version of the truth?

4. In this book, someone is always watching, waiting for someone to put a foot wrong. Hanna appears to be Stephanie’s only friend—the one person who doesn’t wish her ill will—and yet, Stephanie decides to use Hanna as part of her plan to get rid of Patrick. Did you think Hanna suspected more than she let on? What would you have thought, if you were in her shoes?

5. The “unreliable narrator” device is certainly at play in the novel, making it a challenge to know who’s telling the truth, and when. At any point, were you able to spot a lie from one of the characters? If so, what was it, and how did you know?

6. Lapena kicks off the main narrative with Stephanie and Patrick, but she also weaves in the subplots with Cheryl, Gary, and Devin, as well as Nancy and Niall. Erica ties the three storylines together—did you anticipate how her manipulations would play out, and how the three threads would connect? Explain.

7.  Erica’s fate in the epilogue will provide relief for many, if not all, of the other characters. Who do you think is to blame, and why?

The End of Her has it all: toxic relationships, dark pasts, and red herrings. How did you come up with such a twisted and complex story?

Would I seem like a terrible person if I admitted I just think that way? Not in real life—but when I’m writing, I like to go to the dark places in my characters. I start with a premise, see where it goes and how the characters develop as the plot grows. And, of course, as I get deeper into my characters and explore them and their backstories and their motivations, I go into some pretty murky territory.

The book concludes with an unsolved crime. Why did you decide to end the book this way . . . or do you have a sequel in mind?

I don’t have a sequel in mind, but I felt that this was simply the right ending for this particular book. I love to leave a book with the feeling that the lives of the characters live on beyond the page. Then I feel I’ve done my job. That’s how it feels for me—as if they’re all still alive out there somewhere.

Do you know your characters’ motives before you start writing, or is it something that comes to you as you write?

A bit of both, actually. I often have a broad idea of what’s motivating the various characters, but it gets fine-tuned as the story goes along, and amplified and more detailed.

Revenge, blackmail, murder, and deceit are all at play in The End of Her. What was your inspiration?

The inspiration was something I read in the news a while ago about someone digging out a car after a snowstorm, and his partner got into the car to stay warm and died accidentally of carbon monoxide poisoning, because the exhaust pipe was blocked with snow. It was so tragic—but I also thought, what a perfect way to rid yourself of your wife if you were so inclined. That was the germ of the story, and I went on from there. Erica and all her evil machinations grew as the story developed and characters were added.

Motherhood is an important element in this story. How does being a mother affect the female characters?

Motherhood is such an interesting thing. It makes you extremely vulnerable, for one thing, because for most people, there’s nothing they wouldn’t do to protect their child. We certainly see this in Stephanie and Cheryl. It also provides an opportunity to exploit people—if you have no scruples at all. Without giving too much away, children are a motivating factor in many people’s lives, in many ways, and that’s the case in this story as well.

The marriages—and relationships—in this novel are complicated, to say the least, with lying and infidelity threaded throughout. How did you create such complex partnerships?

I watch a lot of true crime shows, and honestly, you wouldn’t believe what real people get up to. Truth really is stranger than fiction sometimes. People are complicated and their lives are messy, and I just think about how things could get worse for my characters—I always find a way. People Behaving Badly could be a title for one of my books!

It’s the home and family relationships that interest me, the idea of subverting what’s “normal” or what looks like normal. I like to subvert the idea of the white picket fence and the perfect couple, the perfect family. No one is perfect. But my characters can be pretty out there. And it’s our closest relationships that have the greatest impact on us. The secret to creating that paranoia? Going deep into character and finding what lurks there.
Learn More About The End of Her
print
Back to Top