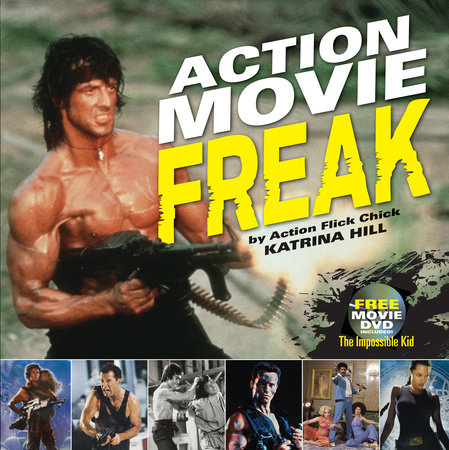 Written by woman of action Katrina “Action Flick Chick” Hill, Action Movie Freak is packed with spine-tingling excitement and thrilling moments that make action movies a beloved genre for those who crave crashing cars, exploding buildings, and faces getting kicked six ways to Sunday. With badass heroes that ain’t got time to bleed, women warriors, thrilling chases and outrageous fisticuffs, Action Movie Freak celebrates a wide variety of more than 100 movies that have left audiences on the edge of their seats. Complete movie reviews are divided into various sub-genres including Classics That Defined the Genre (The Bond movies of the 1960s, “Bullit,” “Dirty Harry”) Bloodiest Action Movies (“Ninja Assassin,” “Rambo” series, “RoboCop”) and Action From the Far East (“Bangkok Knockout,” “Ong Bak,” “Ip Man”). The book also spotlights specific action heroes/actors, and features 250 color photos and movie posters, as well as fun Top 10 lists, including best one-liners and most over-the-top kills.

www.ActionFlickChick.comKatrina Hill is first and foremost a lover of all things action. Since a young age she has been in love with the action genre, and has been influenced by action stars both new and old, from Stallone and Schwarzeneggar… More about Katrina Hill

“Someone on your holiday gift-buying list needs this.” –Rachael Berkey for Hello Giggles