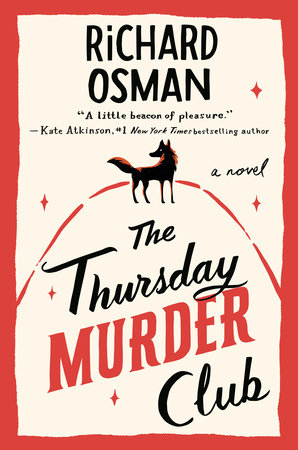 An Introduction to The Thursday Murder Club

From British television personality, quiz genius, and brilliant comic writer Richard Osman, The Thursday Murder Club is a laugh-out-loud whodunit full of twists and turns; a smart, sympathetic, and warm introduction to four charming amateur sleuths; and an unforgettable romp through the rolling hills of Kent, where a peaceful retirement village becomes the backdrop to a ruthless murder that nobody saw coming . . .

Every Thursday, four unlikely friends meet in the Jigsaw Room at the luxurious Coopers Chase Retirement Village to solve cold cases that have been languishing on the books for years. There’s Red Ron, the infamous former socialist firebrand, still causing trouble wherever he can; gentle Joyce, widowed, pining for another resident, but surely not as innocent as she seems; Ibrahim, a former therapist who understands the darker side of human nature; and Elizabeth? Well, no one is quite sure who she really is, but she’s definitely not a woman to underestimate. Though they may be in their seventies, Elizabeth, Ibrahim, Joyce, and Ron still have a few tricks up their sleeves. When a local property developer winds up dead, The Thursday Murder Club finds themselves in the middle of their first live case—can the four catch the killer before it’s too late?

In The Thursday Murder Club, Richard Osman has employed all of his considerable wit and intelligence to give us just the curl-up-and-read novel we need. It is pure enjoyment, so prepare yourself for a flat-out pleasure of a book.

1. Though the book follows the four friends—Joyce, Elizabeth, Ibrahim, and Ron—solving the murder, the only first-person POV is Joyce’s via her diary. Why do you think the author chose to show her perspective in such a way?

2. Joyce was a nurse, Elizabeth was in the secret service, Ibrahim was a psychiatrist, and Ron was a trade union leader. Who do you think was most helpful in solving the crime? What strengths did they each bring to the table? What were their weaknesses?

3. Do you think that PC Donna De Freitas and DCI Chris Hudson make a good team? Do you think Donna was smart to stay in touch with Joyce, even though it was unprofessional at times? Why or why not? What do you make of the relationship between the detectives and the septuagenarians?

4. Joyce says, “I am very happy to be overlooked and always have been. And I do think perhaps that will be helpful in this investigation.” Do you agree? What insights and advantages does she gain by not calling attention to herself, and staying under the radar?

5. Society often writes off the abilities of the elderly—assuming both body and mind are deteriorating. At the heart of The Thursday Murder Club is a lesson to never to underestimate this population. Who misjudges the residents of Cooper’s Chase the most? What are the consequences of underestimating the four friends?

6. One of the reoccurring themes is the gray area between the law and each character’s moral code. Do you think Penny’s husband, John, did the right thing? How about Penny?

7. At any point, did you have an idea of who might have committed the murder? Who did you suspect, and why? Were you correct?

8. Joyce is always baking, and the others are always eating. The next question is simple: What is the best cake?

9. If you had to solve a murder, which three people—could be friends, family, celebrities—would you choose to help you solve it?

A Conversation with Richard Osman

Before writing The Thursday Murder Club, now an international bestseller, how did you keep yourself busy?

Well, that’s a good question. For many years I had a career creating television programs, including shows which went on to be big hits in the United States like Survivor and Deal or No Deal. I then accidentally became famous when I was pitching a quiz show called Pointless to the BBC. The BBC loved the show, but they also asked, having enjoyed the pitch, would I like to present it myself?

“Sure,” I thought. “That’ll be something to tell my grandkids about one day: the time I hosted a minor quiz show.” And so I said yes, with no idea of what was to happen next. Pointless quickly became a phenomenon in the UK. It’s on BBC1 every single day of the week and, ten years later, we have now recorded 1,600 episodes. Not bad for a show I thought would disappear after one season.

I now present another daily BBC quiz called House of Games and am annoyingly unavoidable on British television, also regularly guesting on all of the top UK comedy and talk shows. For someone who had never appeared in front of camera until he was nearly forty, and for someone who has always been a deeply comfortable introvert, it has been a bizarre career shift, but a very lovely one.

But I knew I had to return to my first love sometime, and my first love was always writing. I was writing for the English rock magazines in my teens, and my TV career began in comedy writing. I had been waiting to write a novel for a long time. I was waiting for the right time and the right idea to come along at once. It was always going to be crime fiction, as I have always read it so avidly and loved it so much.

What was the inspiration for The Thursday Murder Club?

I was visiting a relative who lives in a beautiful retirement community, nestled in the heart of the English countryside. This place had it all: green fields, gleaming lakes, ancient woodlands, state-of-the-art gym and pool. It even had a Jacuzzi and steam room, for goodness sake. You have to be over sixty-five to live there, but I promise you that if you visited today then you’d want to move in straight away.

We sat down for lunch on the restaurant terrace and I looked at my phone, and I saw that I had no reception. So there I was, in this gorgeous, peaceful place, miles from anywhere, with an English sun beating down, and my phone wouldn’t work. And that was the exact moment I thought, “Well, this would be an amazing place for a murder.”

Rather than commit one, I thought I should probably write about one instead. I looked around at my fellow diners. I was surrounded by interesting people who had led interesting lives, and I had another thought. “If there was a murder here, I bet this lot would solve it.” And so The Thursday Murder Club was born.

The entirety of the novel is set in Kent, England, following four quintessentially British friends. Do you think American readers will connect with the residents at Coopers Chase despite the novel being set across the pond?

To think my book is out in America is an honour I can’t begin to describe, or, rather, “an honor” I can’t begin to describe. I know there has long been a literary love affair between our two countries, and I know an American audience will feel absolutely at home in the English countryside of The Thursday Murder Club—a world made familiar by the works of Agatha Christie and many others.

America has always been my great obsession. My major at Cambridge University was American Politics & Society. I will happily sit and discuss FDR and Nixon, JFK, and Obama, and congressional oversight all evening long if you’d like to. I’m aware that not many people would actually like to, but just so you know the offer’s there. I am also obsessed with American sport, but let’s not get into that. I’m one of the few English people who will argue passionately that baseball is better than cricket. This is just between us; please don’t tell the English.

I can’t wait to discuss the book with an American audience. If nothing else I can take you through the English phrases in the book which foxed my US publishing team. So if you want to know what “going for a mooch” or “having a slash” mean, then it will be my pleasure to enlighten you.
Learn More About The Thursday Murder Club
print

Birds of a Feather
Jacqueline Winspear

Robert B. Parker’s Someone to Watch Over Me
Ace Atkins

The Forgotten Room
Beatriz Williams, Lauren Willig and Karen White
Back to Top