That Summer in Berlin Reader’s Guide 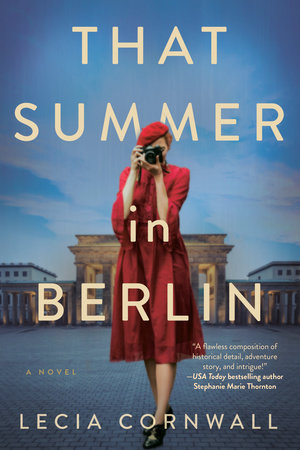 That Summer in Berlin Reader’s Guide

1.   Despite the fact that women were excluded from politics in Germany under the Nazis, Ilsa von Schroeder believes that women are the true power behind the scenes. How did women influence policies in history? How do women influence the action of the novel?

2.   Tom walks a fine line in his role as a foreign journalist in Berlin, posting the kinds of stories that wouldn’t offend his hosts in order to gain their trust. Do you think this ultimately does more harm than good? Why or why not?

3.   It was the practice of the upper classes in Britain to send their debutantes to Germany during the 1930s in hopes of forming social connections that would make war impossible. Was this a legitimate possibility, a naive hope, or a form of appeasement? How does this play out in the novel?

4.   Propaganda was successfully used by the Germans to create a false impression of Germany under Nazi rule. Why were tourists so willing to believe what they saw? How do messages portrayed in movies, books, music, and art in the past and the present shape political opinion?

5.   Viviane takes photographs because she believes the camera cannot lie. Does a camera truly reveal truth or simply reflect the photographer’s beliefs and opinions, another form of propaganda?

6.   Julia falls in love not only with the façade of the Olympic Games but also with a man striving to rise in the new Germany. What must she give up in order to be happy in Germany?

7. While Georg von Schroeder does not consider himself a Nazi, he does little to prevent the rise of the Nazis or the fact that his own sons enthusiastically follow Hitler. How does he passively try to thwart Nazi power?

8.   In the story, Viviane symbolizes the Lady of the Lake, guardian of the magical sword of King Arthur. In what Arthurian roles do other story characters fit best? How does the story compare to the legends of Camelot?

9.   Is Viviane naive to believe the stories her father told her about King Arthur, or do the stories lend her strength and make her more resilient?

10. Could the actions of ordinary people like Viviane or Tom have truly had an impact on stopping another war? Can ordinary people have an impact in modern society?
Learn More About That Summer in Berlin
print

A Dress of Violet Taffeta

The Last Time I Saw Paris

Sister Noon
Back to Top