A Most Clever Girl Reader’s Guide 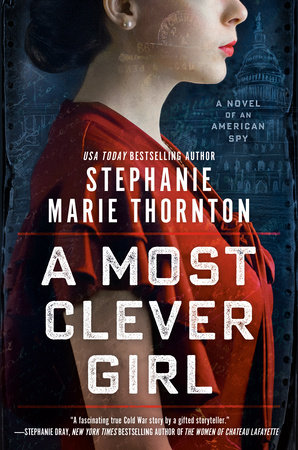 A Most Clever Girl Reader’s Guide

1. Throughout this story, Elizabeth Bentley is an unreliablenarrator as well as an antihero. At what points did you cheerfor her? When did you condemn her? What do you think sheshould have done differently in her life?

2. Elizabeth calls herself a villain and tells Cat that even themost heinous villain has reasons that let them rationalize theirwrongdoing. How did Elizabeth rationalize the many wrongsshe committed?

3. Many of the characters in this book—Elizabeth,Yasha,Mary Tenney, and even Cat—goby multiple names. What isthe power of a name? What role did code names play throughoutthe novel?

4. When he recruits her, Yasha tells Elizabeth that he needsoperativeswho trust him implicitly and who will report any mistakesthey have made even if it’s the dead of night. Was there anything that surprised you throughout the story about the relationshipsbetween Russian handlers and their contacts?

5. The life of a spy is often portrayed as exciting andglamorous—completewith dazzling spy gadgets and high-​speedchases. What parts of Elizabeth Bentley’s life as a spy fitthat stereotype and what parts were entirely the opposite? DidElizabeth’s life remind you of any other spy stories you’ve reador seen on television or in movies?

6. Mary Tenney says to Elizabeth at one point, “There’s a sayingmy father often said: Sinners make the best saints. I knowwhat I’m doing isn’t strictly right, but it’s not wrong either. Becauseit’s for a good cause.” Do you think her work as a honeytrapand Elizabeth’s spy work were more right or wrong? Didthe ends truly justify their means?

7. Following the end of the war and Yasha’s death, Elizabeth decidesto go to the FBI with her insider knowledge of the Russianspy rings in America. Do you think she made the right decision?

9. The adoption scam Elizabeth speaks of was a real phenomenonin America, especially in the 1950s. (The author’s ownmother was adopted this way.) Were you surprised to hear ofsuch illicit adoptions taking place?

10. Elizabeth’s work as a Soviet spy and FBI informer spannedboth World War II and the Cold War. What did you know aboutspying during these eras before reading this book? Had youheard of William Remington and the Rosenbergs, Joseph Mc‑Carthy, and the House Un‑AmericanActivities Committee?
Learn More About A Most Clever Girl
print

A Tip for the Hangman
Allison Epstein

The Fortunate Pilgrim
Mario Puzo
Back to Top