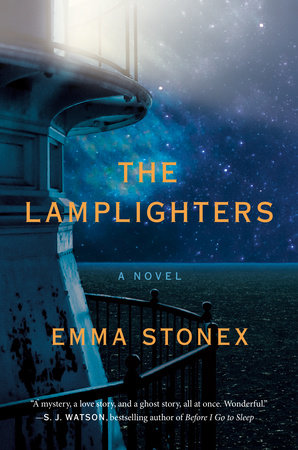 1. The Lamplighters is a gorgeous, eerily atmospheric book with scenes that live on the knife’s edge between real and imagined. How does Stonex’s writing play a part in creating this balance between reality and illusion?

2. We are presented with several versions of what happened the night of the men’s disappearance—and we are also given reasons to doubt every account. What do you think really happened? Do you feel there is a clear answer? Do you think the men’s accounts of what happened on the Maiden were real? Does it matter?

3. Dan Sharp, the writer who interviews the women, is a bestselling author of naval action thrillers. Do you think The Lamplighters is meant to be his book? If so, how does that shift your perspective on the events of the book?

4. Soon after the disappearance of Arthur, Bill, and Vince, the newspapers pin the blame on Vince after they learn that he is an ex-con. Trident House seems to rely on this prejudicial reaction, evident in the leading questions they ask their interviewees in the transcripts from 1973. How else do presumptions play a part in the characters’ relationships in The Lamplighters? Discuss others’ or your own experiences with preconceived notions and how they’ve affected your relationships.

5. Stonex’s novel is filled with symbols and portents, like the White Rook and the Silver Man. Talk about the role these elements play in the plot and the atmosphere of the novel.

6. Stonex shifts perspectives throughout the novel, switching between first-person monologues, first-person accounts, and third-person narration. How does this work toward creating full, complex characters? Discuss if and how your understanding of the characters changed as Stonex moved from their direct accounts to the third person. Do you think the external selves they presented matched their internal voices?

7. Discuss the marriages in The Lamplighters. Did the characters share any stories or perspectives on marriage that particularly resonated with you? What compromises did each character make in their marriage?

8. Bill and Helen have vastly different understandings of their brief association, as does Jenny. In the face of such opposing perspectives, is it possible to parse the true version of events? Do you think there can be such a thing as an absolutely true version of any story?

9. Stonex paints vivid, complex women in The Lamplighters, all of whom have different understandings of what it means to be a “good” wife, mother, and friend. For example, believing that women in similar circumstances should lean on each other, Jenny finds Helen’s aloofness condescending and hurtful; on the other hand, a grief-stricken Helen craves distance and privacy. Consider the various perspectives on womanhood and female relationships. Did any of these particularly resonate with you? Did you find any frustrating or surprising?

10. Jory remarks that a “fisherman told him once about the sea having two faces. You have to take the both, he said, the good and the bad, and never turn your back on either one of them.” His description implies that the sea is alive—and indeed Stonex’s imagery treats it like a person: the water “burps”; it’s “fickle.” How does the sea function as a character in the novel? What would you say are its two faces? How does each person’s relationship with the sea—whether they turned their backs or faced it head-on—inform how their journeys play out?

11. The Maiden herself has a visceral presence in the book, acting as yet another female character. Why do you think Stonex decided to name her “the Maiden”? What relationship does the tower have with the men and the women they left behind? How do you think the Maiden’s role compares with the sea’s role in the book? Do you think they—like Michelle, Helen, and Jenny—were left behind, too, when the men disappeared?

12. In her first interview with the writer, Helen evokes the adage that time heals all wounds: “Time gives you a bit of distance where you can look back at whatever’s happened to you and not feel all the feelings you once had.” Did you find this true within the novel? How has time affected each woman’s perspective of the men’s disappearance—and of each other?

13. Jenny and Hannah share a tender moment, in which Jenny confesses a secret she’s been hiding from her daughter since Bill’s disappearance. What would you have said if you had been Hannah? Do you think there is such a thing as an unforgiveable act? Does your answer change if it’s a family member who has committed it?

14. As we learn through the course of the novel, Helen and Arthur experience a great loss, leaving them on separate sides of a chasm in their relationship as well as in their ties to the sea. How does this loss reshape their marriage? How do they create space for each other’s grief and anger? How do you see grief expressed in The Lamplighters, generally? What grace do you think we owe one another in the face of grief?

15. As Stonex writes in her Author’s Note, The Lamplighters is inspired by the real-life unresolved disappearance of Thomas Marshall, James Ducat, and Donald MacArthur, and is the product of extensive research into how lighthouse keepers lived their lives in the towers they managed. How did this detail affect your reading of the novel? For a mystery to be satisfactory, must it be solved, or have you found that having an answer is disappointing and ruins the story? Does your opinion change depending on whether the unsolved mystery is real or not?

16. In many ways, The Lamplighters is a story of reconciliation—characters reconciling with their pasts and making peace with one another and their own choices. Did you feel that everyone achieved reconciliation by the end of the book? How do you think the women’s relationships have shifted, if at all? Did you feel satisfied by the ending?

Learn More About The Lamplighters
print

We Are All the Same in the Dark
Julia Heaberlin

Then She Vanished
T. Jefferson Parker

The Right Thing to Do (Short Story)
Jonathan Kellerman

The Silence of the White City
Eva García Sáenz

The Other People
C. J. Tudor

Just Watch Me
Jeff Lindsay
Back to Top