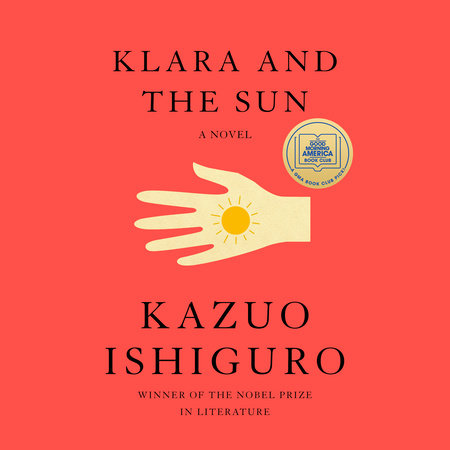 The questions, discussion topics, and other material that follow are intended to enhance your group’s conversation of Kazuo Ishiguro’s Klara and the Sun, a moving tale by a contemporary literary master about the power of love to heal and forge connections even beyond the realm of human consciousness.

1. The setting of Klara and the Sun is sometime in the future, when artificial intelligence (AI) has become more integrated into human society. Which elements of the novel felt familiar to you at the time of reading, which felt hard to imagine, and which were easy to imagine as a possibility for your lifetime?

2. Klara is prized for her observational qualities as an Artificial Friend. How do the tone and style of her first-person narration help to convey the degree of her attention to detail?

3. Does the term “Artificial Friend” resonate at all with you now, as a contemporary reader in the age of social media and the internet? What’s the difference in the level of interaction between children and their “artificial” versus their real/human friends?

4. The details of Josie’s illness are kept vague. Based on what we learn from the conversations among Helen, Chrissie, Paul, and Rick about the choices parents make for their children in this world, how might that have affected Josie’s condition?

5. Sal, Josie’s late sister, is said to have died from a disease when the girls were younger. What shadow does that loss cast on the family and over the novel as a whole?

6. Before Klara goes home with Josie, Klara and the other AFs have a rapport with one another, especially with Rosa. What do these conversations, thoughts, and feelings suggest about the sophistication of the AI technology in the novel, or about the unknown depths of the AFs’ consciousness?

7. What does Klara’s connection to the Sun suggest about the nature of her inner world? Is her understanding of its power based mostly on what seems to be the plain facts of her existence—that she is powered by solar energy—or something deeper?

8. Rick and Josie carry on a quiet but intimate relationship through their drawings. What is unusual about their friendship and their plan for their future, given the social hierarchy for children based on their class and economic privilege?

9. Discuss Klara and the Mother’s trip to Morgan’s Falls together. How does the natural setting help the Mother to reveal some of her vulnerabilities and fears? Why do you think the Mother makes the choices she does for her daughter?

10. Discuss the scene at the diner with Helen, Rick, and Vance. How are these concerns about a child’s ability to succeed, and the measures that people will take to alter those outcomes, similar and different from what happens in society now? Were those efforts to win Vance’s favor fruitful in the end? What might Rick have been able to do to advance society’s dependence on technology had his drone development and other engineering been supported?

11. Consider some of the ways that the characters in the book socialize: the “quick coffee” with the Mother and Josie, the kids’ “interaction meetings,” Josie and Rick’s drawing meetings, and the sessions Josie has with Mr. Capaldi. How did you interpret the tone and atmosphere of these moments of connection between humans?

12. What was your opinion on the plan to turn Klara into an avatar of Josie? Who would have benefitted most from Josie being able to “live” on in another form? Would you have made the same choice for your child or a loved one in the same situation?

13. Klara and Paul share a moment of concern and consideration regarding her ability to learn Josie’s heart, which he describes as: “Rooms within rooms within rooms . . . No matter how long you wandered through those rooms, wouldn’t there always be others you’d not yet entered?” (216). What do you make of Klara’s response about the finitude of such metaphorical rooms? Would you say, in your own experience, you’ve been able to explore and learn all the rooms of your own heart, or another person’s?

14. Would you describe the relationship between Klara and Josie as love? Where did you notice what seemed like genuine love to you in the novel?

15. The novel engages in an important conversation about the harm that is being inflicted on the planet through the symbol of the Cootings Machine. How do the events of the novel comment on the value of nature to the health and well-being of humanity, and even to nonhuman beings?

16. What did you make of Klara’s personification of the Sun, particularly in her final plea to save Josie? She observes in the layers of glass “that in fact there existed a different version of the Sun’s face on each of the glass surfaces . . . Although his face on the outermost glass was forbidding and aloof, and the one immediately behind it was, if anything, even more unfriendly, the two beyond that were softer and kinder” (273). Have you ever experienced nature and other nonhuman entities in a similar way? What value does this have in our ability to experience compassion for each other?

17. What did you think of the place where Klara is sent after Josie is finished with her? What does this bring up about the moral and ethical considerations of integrating more AI into society? Did her fate bring to mind that of any people you know?

18. Who, in the end, seems more human to you—the people in the novel, or the AFs?

Deacon King Kong
Back to Top