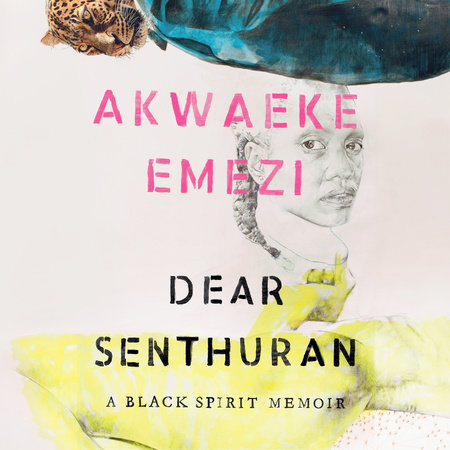 1. The author of Dear Senthuran, Akwaeke Emezi, tells their story through letters to people in their life: friends, family, fellow writers, and literary heroes, even spiritual beings. What did you gather about their relationship to each of these correspondents? What role do they play in the evolution of Emezi’s quest to understand and express the self?

2. Returning to the city of Lagos after attending college abroad, Emezi encountered skepticism about whether they were “Nigerian enough.” What does this mean? How have various communities attempted to police Emezi’s identity throughout their life, and how do they respond to and fight back against forces that try to define or deny them?

4. In the letter “Mutilation / Dear Eugene,” Emezi recounts their experience with surgery as a way to bring their physical body into alignment with their ogbanje identity. What did their account of these surgeries teach you about the tension between the physical and the spiritual? What surprised you most about their decisions, and the reactions of others?

6. In a letter to Toni Morrison, Emezi reveals how they have been inspired by the author’s declaration “I stood at the border, stood at the edge, and claimed it as central.” How does this quotation guide and describe Emezi’s approach to writing and being a public figure? How does it describe the power of individuals to create change?

7. “I used to think I wanted to be famous. Now I think I just want to be safe.” How does Emezi’s relationship to public recognition develop throughout their life? What made them want to be famous, and how have their feelings changed? What is the distinction between fame and power?

8. From the resistance they encountered during their MFA program to the tumultuous journey of selling and publishing their first book, Emezi describes a series of obstacles involved in bringing their writing to readers. Which aspects of this surprised you? How do they find solutions for these challenges, or make peace with them?

9. Throughout the book, Emezi writes about the masks people wear to face the world and one another. Did you see this image—the wearing of masks—as a positive way to navigate the world? If not, what problems might it entail? What does the book suggest about the value of both masks and the person behind such masks?

10. In an effort to feel more at home, Emezi buys and decorates a home they call Shiny the Godhouse. How are Emezi’s changing physical needs reflected in their house? What elements of the house are symbolic for them? What role does the house play in Emezi’s search for peace?

11. By the end of Dear Senthuran, how has Emezi’s outlook on life and death changed?

A Walk on the Beach
Joan Anderson

Nobody Will Tell You This But Me
Bess Kalb

To Shake the Sleeping Self
Jedidiah Jenkins

Recollections of My Nonexistence
Rebecca Solnit

What We Carry
Maya Shanbhag Lang