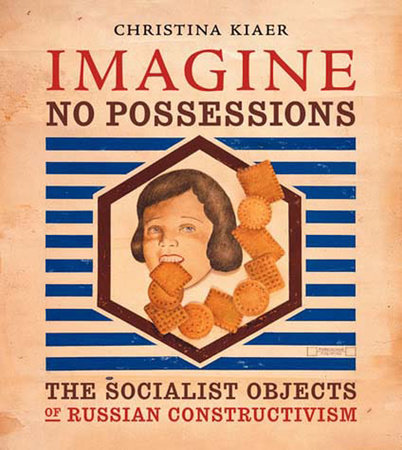 The Socialist Objects of Russian Constructivism

About Imagine No Possessions

How Constructivist artists in Russia between 1923 and 1925 developed a counterproposal to capitalism’s commodity fetish by producing objects meant to be “comrades” in the creation of an egalitarian socialist culture.

In Imagine No Possessions, Christina Kiaer investigates the Russian Constructivist conception of objects as being more than commodities. “Our things in our hands must be equals, comrades,” wrote Aleksandr Rodchenko in 1925. Kiaer analyzes this Constructivist counterproposal to capitalism’s commodity fetish by examining objects produced by Constructivist artists between 1923 and 1925: Vladimir Tatlin’s prototype designs for pots and pans and other everyday objects, Liubov’ Popova’s and Varvara Stepanova’s fashion designs and textiles, Rodchenko’s packaging and advertisements for state-owned businesses (made in collaboration with revolutionary poet Vladimir Mayakovsky), and Rodchenko’s famous design for the interior of a workers’ club. These artists, heeding the call of Constructivist manifestos to abandon the nonobjective painting and sculpture of the early Russian avant-garde and enter into Soviet industrial production, aimed to work as “artist-engineers” to produce useful objects for everyday life in the new socialist collective.

Kiaer shows how these artists elaborated on the theory of the socialist object-as-comrade in the practice of their art. They broke with the traditional model of the autonomous avant-garde, Kiaer argues, in order to participate more fully in the political project of the Soviet state. She analyzes Constructivism’s attempt to develop modernist forms to forge a new comradely relationship between human subjects and the mass-produced objects of modernity; Constructivists could “imagine no possessions” (as John Lennon’s song puts it) not by eliminating material objects but by eliminating the possessive relation to them. Considering such Constructivist objects as flapper dresses and cookie advertisements, Kiaer creates a dialogue between the more famous avant-garde works of these artists and their quirkier, less appreciated utilitarian objects. Working in the still semicapitalist Russia of the New Economic Policy, these artists were imagining, by creating their comradely objects, a socialist culture that had not yet arrived.

…a book so luminously written and gorgeously illustrated that Sovietologists, art historians, and students of modern culture of all stripes will find it a treat to open and impossible to put down.—AAASS Vucinich prize committee—

Kiaer has written perhaps the most through study of this brief but highly provocative and original era…Imagine No Possessions is a valuable consideration of a period that, some seventy years after its end, continues to generate fertile discussion.

Splendid…Kiaer’s very rich study…succeeds in convincing us that what had thus far been considered a fairly limited and even aberrant aspect of Constructivism was part and parcel of its ideological program.