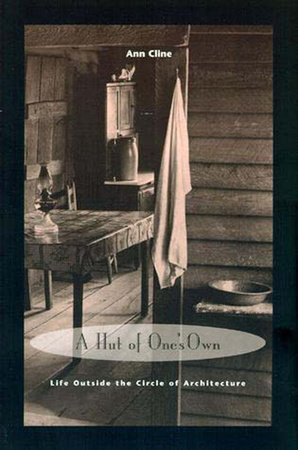 A Hut of One's Own

Life Outside the Circle of Architecture

About A Hut of One’s Own

An exploration of the smallest and simplest of dwellings offers answers to some of the largest and oldest questions about architecture.

This small book on small dwellings explores some of the largest questions that can be posed about architecture. What begins where architecture ends? What was before architecture? The ostensible subject of Ann Cline’s inquiry is the primitive hut, a one-room structure built of common or rustic materials. Does the proliferation of these structures in recent times represent escapist architectural fantasy, or deeper cultural impulses? As she addresses this question, Cline gracefully weaves together two stories: one of primitive huts in times of cultural transition, and the other of diminutive structures in our own time of architectural transition. From these narrative strands emerges a deeper inquiry: what are the limits of architecture? What ghosts inhabit its edges? What does it mean to dwell outside it? Cline’s project began twenty-five years ago, when she set out to translate the Japanese tea ritual into an American idiom. First researching the traditional tea practices of Japan, then building and designing huts in the United States, she attempted to make the “translation” from one culture to another through the use of common American building materials and technology. But her investigation eventually led her to look at many nonarchitectural ideas and sources, for the hut exists both at the beginning of and at the farthest edge of architecture, in the margins between what architecture is and what it is not. In the resulting narrative, she blends autobiography, historical research, and cultural criticism to consider the place that such structures as shacks, teahouses, follies, casitas, and diners—simple, “undesigned” places valued for their timelessness and authenticity—occupy from both a historical and contemporary perspective. This book is an original and imaginative attempt to rethink architecture by studying its boundary conditions and formative structures.

Ann Cline has succeeded admirably in assessing the crisis of architectural meaning in what seem to me to be the only authentic terms possible… It is the way Cline handles [her] themes—the mature personal insight she invests them with—that give her book its originality, its edge, and its profound humanity.—Indra McEwan—

Looking for More Great Reads?
21 Books You’ve Been Meaning to Read
Download Hi Res
A Hut of One's Own

A Hut of One's Own