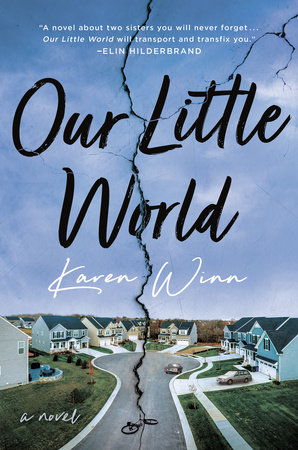 1. We learn from the first chapter that both Sally and Audrina have died. How do you think your experience with the story would have differed if you hadn’t known about their deaths until they happened?

2. In many ways, Our Little World is a novel about innocence lost. It’s easy to point to the bigger moments of the story—the deaths, the secrets—and say that’s when it happened. But how does Bee’s coming-of-age start gradually? How do smaller events and more mundane occurrences start to shift her perspective even before these world-shattering events?

3. Bee and Audrina’s tempestuous relationship is central to the book. Bee feels constantly compared to Audrina and thinks that she is found lacking. They fight and make up often throughout the story. Did this representation of growing up with siblings resonate with you? Why or why not?

4. How do you think the small-town setting of Hammend contributed to the events of the story?

5. We’re told that Bee hates her given name, Borka, which was the name of her father’s aunt who died from a brain aneurysm. How does Bee’s rejection of the name, and with it, a part of her family’s Hungarian heritage, reflect the world around her, as a child in a small town in the 1980s?

6. Bee’s jealousy and longing for recognition can, at times, cause her to make mistakes or unintentionally hurt other people. In hindsight, she often feels deeply ashamed of her actions. Later, she even tells her therapist that she feels responsible for Audrina’s death. Do you think Bee’s self-blame is reasonable? Should she forgive herself?

7. If Bee had turned in the bracelet to the police the day she found it, do you think the events of the story would have changed? Why or why not?

8. After Sally’s disappearance, Bee talks about her and Audrina’s world as being literally small because they were kept inside where it was just the two of them. How was the world around them also a “little world” in some respects? How did the shared naivete of the town mirror the girls’ experience?

9. Bee describes a conversation with her father, in which she asks him to translate a Hungarian phrase, which means, “Even a white lily can cast a black shadow.” What larger meaning to you think this line has in the context of the story?

10. Later in the book, we learn more about what Audrina was thinking from her diary. How did this shift your perspective of Audrina? How does the diary serve as a framing device for the latter parts of the book?

11. From Bee and Audrina’s experiences with diabetes and trichotillomania, to the way the search for Sally is carried out, much of the plot is rooted in its 1980s setting. How might this story be different if it took place today?  How did this modern lens affect how you saw the characters as you were reading?

12. Why do you think Bee’s father and Mrs. Baker were drawn to each other?

13. If Audrina hadn’t died that day in the library and instead lived to be an adult, how do you think her relationship would be with Bee today?
Learn More About Our Little World
print

The Life of the Mind

The Reckless Oath We Made

Forbidden City
Back to Top