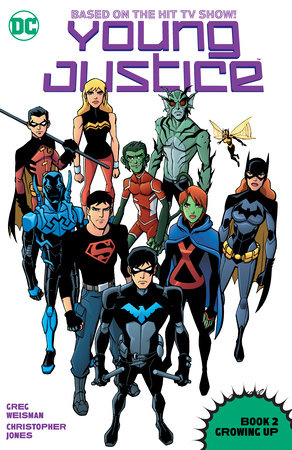 Superboy. Robin. Kid Flash. Aqualad. Miss Martian. Artemis. They’ re not just sidekicks—they’re Young Justice, one of the world’s finest superhero teams in their own right. And from Atlantis to Gorilla City, from the menace of Ocean Master to the clutches of Kobra, they’re on the front lines of the battle against evil, where even experienced heroes like Batman, the Flash, and Green Arrow have a hard time keeping up. But some enemies are too big to fight on their own. And when Brainiac, the Collector of Worlds, comes to claim Earth as his own, Young Justice will expand their ranks, with Nightwing, Batgirl, Beast Boy, Blue Beetle, and Wonder Girl joining the fight. Will their combined forces be enough to stop the greatest threat they’ve ever confronted?

Find out in Young Justice Book 2: Growing Up, from the creative team of writer GREG WEISMAN (co-creator of the television series Gargoyles, The Spectacular Spider-Man, and Young Justice) and artist CHRISTOPHER JONES (Avengers: Earth’s Mightiest Heroes, Justice League Adventures), as the iconic DC superhero team from the hit animated series graduates into the big leagues and faces its final challenge!

Collects Young Justice #14-25, along with the never-before-printed Young Justice: Outsiders #1-2, behind-the-scenes material, and a brand-new afterword by series co-creator and writer Wiesman. 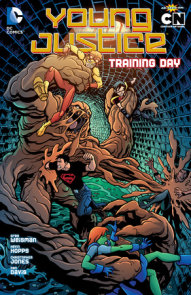 See all books by Greg Weisman