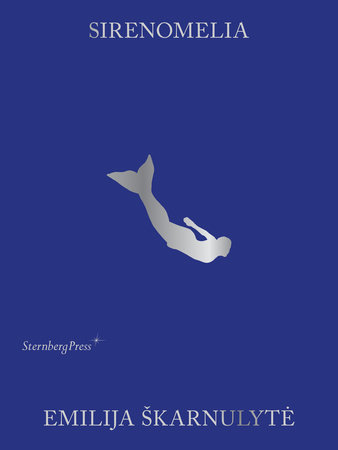 An in-depth focus on artist and filmmaker Emilija Škarnulytė’s Sirenomelia, a cosmic portrait of one of mankind’s oldest mythic creatures–the mermaid.

A mermaid dives through the Cold War ruins of nuclear submarine tunnels above the Arctic Circle in this in-depth focus on Sirenomelia by artist and filmmaker Emilija Skarnulyte, a poetic and scientific meditation on the artist’s iconic cinematic installation exploring post-human mythologies, future archaeology, and the invisible structures that enfold us, from the cosmic and geologic to the ecological and political. With essays, interviews, and excerpts from Andrew Berardini, Roland Penrose, Nadim Samman, and Alison Sperling.

Set in far-northern territories where cold, Arctic waters meet rocky escarpments on which radio telescopes record fast-traveling quasar waves, Sirenomelia links humans, nature, and machines and posits possible post-human mythologies. Shot in an abandoned Cold-War submarine base in Olavsvern, Norway, Sirenomelia is a cosmic portrait of one of mankind’s oldest mythic creatures–the mermaid. The artist, performing as a siren, swims through the decrepit NATO facility while cosmic signals and white noise traverse the entirety of space, reaching its farthest corners, beyond human impact.