Out of the Clear Blue Sky Reader’s Guide 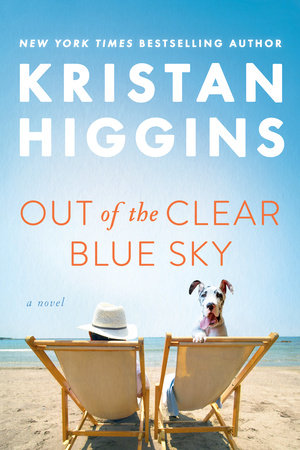 Out of the Clear Blue Sky Reader’s Guide

print
Out of the Clear Blue Sky Reader’s Guide

Reader’s Guide
Out of the Clear Blue Sky by Kristan Higgins
Discussion Questions:

1.   It’s not uncommon for a marriage to fall apart just as children leave home as young adults. More than one person has been told the week or even day of their youngest child’s graduation from high school that their partner is leaving them. Why do you think that happens? Do you think men initiate a breakup more than women?

2.   Why do you think Lillie married Brad? She thought they had a strong marriage, but in hindsight, she sees things she didn’t before. Was it all bad, or did Brad change?

3.   When Brad tells Lillie he’s leaving her, she keeps eating the coconut cake. Why do you think she does that? And in the middle of their fight, she and Brad both pause to joke about a song they both love. Why do you think that happens?

4.   They say revenge is a dish best served cold. Lillie disagrees and takes bitter delight in some of her actions while Brad is still living at home and after he moves in with Melissa. What did you think about her ways of leaving her mark, so to speak? Was she justified in these actions, or did you think she was being petty?

5.   Melissa is a woman who seems to have no remorse about moving in on another woman’s husband. She’s completely confident that she’ll get Brad, and she’s right. Have you ever known someone like Melissa, who dismisses other people’s feelings in order to get what she wants? Which of Melissa’s qualities did you admire, if any, and why?

6.   Motherhood is a recurring theme in this book. Lillie is well aware that her son is moving away from her both geographically and emotionally—as it should be, she says, but which is a painful experience nonetheless. Her own mother seemed to barely tolerate her. Melissa uses Ophelia almost as a prop, but their relationship changes as well. Hannah has Beatrice, and Lillie adores her mother-in-law. There are so many different mother-child relationships in this book. Which do you think are best and worst, and why?

7.   Lillie’s anger at Brad for leaving her is based on her feeling that the divorce would destroy their family, and the family’s future. So many people deal with this changed dynamic after a divorce, from the former in-laws to the kids and grandkids. Did you relate to Lillie’s protectiveness of her family and its future? Could you stay after infidelity to preserve your family? Do you know a couple who’s stayed friends after a divorce?

8.   How did the various Cape settings play a role in the book and affect the characters? Lillie never wanted to live anywhere else; her mother hated the house on Herring Pond and moved to the more glamorous place in Provincetown. Hannah makes a healthy living as a Cape Cod wedding planner; Beatrice leaves after thirty years there. Melissa moves to Wellfleet because she thinks she can stand out more. What did their various views say about the women in this book?

9.   Lillie survives an attempted sexual assault but feels powerless to turn Chase in or even tell anyone about it. With the Me Too movement, so many similar stories have come to light. Do you think things have changed in our culture since Lillie was a teen so that girls feel more empowered to report?

10. Discuss the way Melissa uses people—her college boyfriend, Dennis, Ophelia, Brad and others. What were some other choices she could have made, given her background? Does she have more than her looks, despite what she thinks? What does she learn in hindsight, if anything? How does her relationship with Ophelia and Kaitlyn grow during the book? Did you have any sympathy for Kaitlyn?

11.  Brad repeatedly asserts that he deserves joy at the expense of all other considerations, which enrages Lillie. What do you think Brad means by that? Do you think he is entitled to leave the marriage for this reason? Is he more than a cliché of a middle-aged man? Was Lillie as good a partner as she thought?

12. Why do you think Lillie’s parents got married? How did their marriage affect Lillie’s choice in life and marriage? How do you think it affected Hannah?

13. Lillie assumes Hannah is perfectly content with her life but finds out that’s not quite true. Have you ever learned something about your sibling or close friend that shocked you?

14. Lillie and Melissa’s relationship changed a lot over the course of the book. By the end, do you think they were friends, or could become friends? Have you ever known a situation where the first spouse becomes friends with the second?

15. Later in the novel, Lillie says she likes living alone, which surprises her. What do you think she enjoys? What does she still struggle with? Have you ever lived alone, either by choice or because of someone else’s choice? How did you feel?

16. The author leads us to believe Lillie will develop a true romantic partnership with Ben after the story ends. But does she need that to be happy? Do you think the novel ends happily for her as it is?

17. Many characters in this book do things that anger other characters, but most of them are forgiven by the end in one way or another. What about Melissa and her sister, Kaitlyn? In the end, though Melissa loves her, she does not forgive her or find a way to have an ongoing relationship with her. Why do you think that happened? Do you think there are some people you just can’t mend fences with? Why?
Learn More About Out of the Clear Blue Sky
print
Back to Top