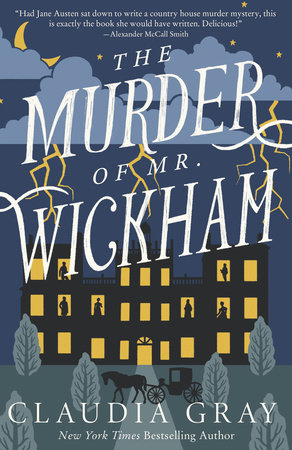 1. The Murder of Mr. Wickham features most of Jane Austen’s principal characters from her novels, continuing their life stories after the original books. Which of the characters’ “futures” felt most believable? Most interesting? Did any of these futures ring false for you, and if so, why?

2. Today, Jonathan Darcy would probably be understood as someone who is neurodivergent. How do the Regency-era characters—including Jonathan himself—understand him? In what ways do the differences between Jonathan’s time and our own make his life harder, or perhaps easier?

3. Mr. Wickham deeply resents the other characters, above all the Darcys. What do you think lies at the core of his resentment?

4. Many of the couples within the book struggle with keeping secrets from one another: George Knightley hides his entanglement with Wickham from Emma; Juliet Tilney becomes angry when Jonathan fails to give her critical information about his family; and Fanny Bertram is reluctant to reveal her brother’s secret to Edmund. Which character, if any, did you feel was most justified in remaining silent? Which characters’ silence could have been most damaging to their relationships?

5. Fanny isn’t certain how to react to her brother William’s romantic relationship with another man. How are her thoughts and conclusions influenced by the time and culture in which she lives?

6. The Darcys’ marriage has been strained in the months immediately preceding the events of The Murder of Mr. Wickham. How did each character express grief over the death of Susannah? How can differences in the ways we grieve cause problems within relationships?

7. Juliet Tilney is a very conventional young woman of the 1820s English gentry in many ways . . . but not all. How does she deviate from societal expectations? In what ways do her differences make her life more difficult? More interesting?

8. The characters live in a world with very concrete expectations, rules, and schedules, far less flexible than in most of our lives today. Would you find this constrictive? Or would having more definite guidelines make life less uncertain, and maybe even a little bit easier?

9. Through different characters’ points of view, we learn a little about what has happened to some of the secondary characters from Austen’s six novels—such as Mary Bennet, John Willoughby, and Mrs. Smith. Which of these were you most eager to learn about? Which other Austen characters do you wish had been mentioned in greater detail?

10. Every principal character is either a member of the gentry—what we might now call “lower upper class”—or related to nobility. To what extent do they consider the thoughts and needs of those around them with less money and social standing, from the servants at Donwell Abbey to the townspeople of Highbury?

Learn More About The Murder of Mr. Wickham
print

The Secrets She Carried

Death at the Crystal Palace

Deadly Summer Nights
Back to Top