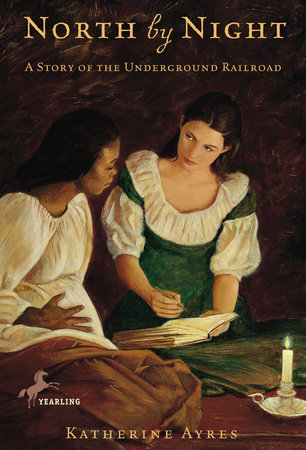 Sixteen-year-old Lucinda Spencer views her work on the Underground Railroad as an adventure until she is asked to make the ultimate sacrifice–leaving her family for the sake of another person’s freedom.

Lucinda Spencer, a farm girl who lives in Ohio, has been helping her parents with the Underground Railroad since age 12. Now, at 16, she is asked to accept a greater responsibility and move in with Miss Aurelia Mercer, a widow who is hiding a family of runaway slaves in her attic. Though Lucinda has never been away from her family, she believes in what she and her family must do to help the fugitives, even if it means putting herself in danger.

Between Cass, a pregnant slave, and Miss Aurelia, Lucy is learning so much–about growing up, love, and standing on her own. But when Cass dies, Lucy must take on the responsibility of the baby. Will she make the right decision?

Young readers will be drawn to North by Night because of the sense of adventure, the secrecy of the task, the strength of the characters, the hint of a love story, and the hopeful ending. Freedom & independence, courage, loneliness, and making choices are themes that Katherine Ayres brilliantly relates through journal entries and letters of the main character, Lucinda Spencer. The historical setting makes this novel an excellent choice to use in a social studies class. In addition, this guide offers links to the language arts, science, math, art, drama, and music curriculum.

Explain the Underground Railroad system to the students. Display a map of the most commonly used routes. Then divide the class into small groups and ask each group to research one of the following people and their role with the Underground Railroad: Harriet Tubman, Nat Turner, Gabriel Prosser, Denmark Vesey, and Levi Coffin. Ask each group to share their information with the class.

Freedom & Independence — Read the following quotation from a poem by Langston Hughes: "Hold fast to dreams, for if dreams die, life is a broken winged bird that cannot fly." Engage the class in a discussion about the dreams of the fugitive slaves in the book. Who is the broken winged bird in the novel? Who keeps slaves’ dreams alive? What might Hope be told when she grows up about her mother’s plight for freedom?

Ask the class to discuss Miss Aurelia’s role in helping Lucinda gain independence. How does Miss Aurelia’s unconventional attitude regarding the role of women affect Lucy’s decision to become involved with the Underground Railroad? How do you think Miss Aurelia might have contributed to the work of Elizabeth Cady Stanton and Susan B. Anthony?

Courage — North Star to Freedom: The Story of the Underground Railroad by Gena K. Gorrell relates the stories of many fugitive slaves. Ask the class to read some of these stories. What gives the runaways the courage to risk their lives to gain freedom? Engage the class in a discussion about the beliefs of the Quakers and why they risk their lives and property to help on the Underground Railroad. Ask students to discuss the moments in North by Night when they feel the characters display the most courage. At what point does Lucinda’s courage almost falter?

Loneliness — Lucinda is only a few miles from home at Miss Aurelia’s house, but she often feels lonely. Ask students to cite passages in the book when loneliness almost overcomes Lucinda. How does her mother’s visit make Lucinda miss her more? What is it about Rebecca’s letters that gives Lucinda strength? Mrs. Spencer feels the lack of women’s company with Lucinda gone. Ask students to discuss how important it is for a person to have someone with whom to share their thoughts and feelings. How does living with Miss Aurelia for a few months make Lucinda more capable of dealing with loneliness when she arrives in Canada?

Making Choices — Miss Aurelia asks Lucinda, “Are these abolitionist beliefs yours, or do they simply belong to your parents?” When does Lucinda make the choice to accept the abolitionist beliefs as her own? Lucinda is in love with Jeremiah Strong. Why is being in love with a Quaker a difficult situation for Lucinda? What influences Lucinda’s decision to leave her family and take Hope to Canada? Of all the choices that Lucinda is faced with in the novel, which decision is the most difficult for her to make? Ask the students to discuss whether they think Lucinda is ever reunited with her family and Jeremiah.

The southern states passed a law that forbade anyone to teach a slave to read. Encourage students to read Nightjohn [link to online guide] (Grades 7 up) by Gary Paulsen. Then have them compare and contrast the risk that Nightjohn takes in teaching Sarny to read to Lucinda’s risk in teaching Cass to read. What kinds of books do you think Sarny and Cass would most enjoy reading?

Social Studies — The bravery and courage of Harriet Tubman, the most famous black leader of the Underground Railroad, inspired others to speak out openly against racial inequality. Have students research one of the following African American activists of the 20th century: Rosa Parks, Martin Luther King, Jr., Medgar Evers, Linda Brown, Malcolm X, and Jesse Jackson. Ask them to provide a brief biographical sketch of the person, highlighting their contributions to racial equality.

George Washington Carver once said, "Education is the key to unlock the golden door of freedom." Lucinda Spencer wants to be a teacher. What will she say to her students about freedom? Ask students to prepare a lesson that Lucinda might teach to her students entitled "Liberty for All." Instruct them to include quotations from historical documents about freedom.

Science — Miss Aurelia fakes having the measles to keep people from searching her house when she is hiding the runaways. Ask students to research the symptoms of the disease. How is it treated? What are its serious side effects if not properly treated? What other diseases were a threat to people in the mid-1800s? Why do you suppose Miss Aurelia chose the measles as the disease to fake?

The fugitive slaves travel mostly at night. Ask students to find out how the North Star and the Big Dipper help them map their way.

Geography/Math — Ohio, Indiana, and Pennsylvania were the most heavily traveled routes on the Underground Railroad. Display a United States map and plot the approximate locations of the stations on the railroad. Divide the class into small groups and assign each group a slave state. Ask them to locate the center of the state. Then have them calculate the shortest route for the fugitive slaves to follow from that point to a terminal on the railroad that will lead them to freedom.

Art — Miss Aurelia is a writer and an artist. She writes an article that she plans to publish once Lucinda has returned and the baby is safe. Ask students to draw a picture that Miss Aurelia might have drawn to accompany her article (p. 151) for The Liberator.

Drama — There are several dramatic passages in the novel. Divide the class into small groups and ask each group to select a passage from the book to write into a short one-act play. Ask them to dress in appropriate costume and perform the play for the class.

Music — The slaves found a great deal of comfort in their songs. In small groups, have students locate some of the Negro spirituals that slaves may have sung. Ask each group to select one song to perform in class. What do the spirituals tell us about the life the slaves led and their hopes for freedom?

Teaching Ideas prepared by Pat Scales, Director of Library Services, The South Carolina’s Governor’s School for the Arts and Humanities.

Boys of Wartime: Daniel at the Siege of Boston, 1776
Laurie Calkhoven

Keeper of the Grail
Michael P. Spradlin and Michael Spradlin