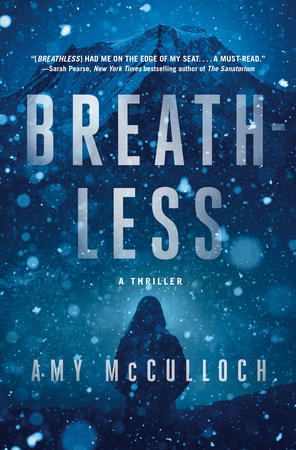 Set against an astonishingly beautiful and absolutely perilous backdrop, Breathless is a master class in blood-freezing suspense by international bestselling author Amy McCulloch.

When we first meet Cecily Wong she’s a journalist and a relative novice mountain climber at a crossroads. Still haunted by a tragic failure, she’s pinning everything on an opportunity that could make or break her career. It’s an exclusive interview with legendary mountaineer Charles McVeigh—if Cecily joins him in Nepal to scale the eighth-highest peak in the world. Nothing is going to stop her.

Following Cecily through the rigorous preparations and meeting McVeigh’s more experienced team of handpicked alpinists, we understand Cecily’s determination, her excitement and, as the ascent begins, her trepidation. When a climber dies in a disturbing accident, Cecily suspects that the price of reaching the summit is steeper than she’d thought. There’s a killer on Manaslu stalking the team, and for Cecily there’s no turning back. Eight thousand meters above the world, the escalating fear is pushing Cecily closer to the edge.

When you join your book club’s discussion of this adrenaline rush of a thriller, consider the following questions to heighten the reading experience. Once you catch your breath, of course.

1. Looking back, now that you know who the killer is, what is the first clue or revealing character trait that you might have missed?

2. When it comes to mountain climbing, Charles McVeigh frees himself from any support, including fixed lines and oxygen. What do you think drives a person to go to such dangerous extremes to achieve a goal?

3. Cecily risks everything to accomplish the climb—her career, her home, her finances and ultimately her life. Is she being brave, foolhardy or adventurous? Or does bravery require a little of the other two?

4. Cecily says on page 27 that McVeigh inspires “confidence in even the most insecure individuals.” Has anyone ever inspired you to take a chance on something you wouldn’t ordinarily have done?

5. The lack of oxygen at high altitudes is said to cause hallucinations and delusions. Was there ever a point in the novel when you considered that might be the case with Cecily’s increasing paranoia?

6. Cecily grapples with a climb that ended in tragedy. Proving herself now is one way to deal with it. Is there something from your own past for which you are still trying to make amends?

7. “Be bothered” is a mountaineering mantra that Cecily shares with Doug on page 84. What do you think she means by it, and how does such a mantra serve a mountaineer?

8. In what ways can arrogance and ego be dangerous attributes in a leader?

9. The whistling in the dark is a recurring motif in the novel that makes Cecily feel unnerved. Is there an otherwise innocuous sound that you find inexplicably unsettling?

10. Cecily’s self-reliance is being undermined by her ex-boyfriend, her parents and even her editor. Was there ever an occasion in your life when you felt you had to prove yourself to others?

11. Among the team members—a “curious group,” says Cecily on page 52—are a CEO, an influencer, a filmmaker and a journalist. Under the same circumstances, with whom do you think you would have an affinity?

12. McCulloch brings her own experiences to Breathless with details about the geography, food and culture of Nepal, as well as the rigors of mountaineering itself. How much was new to you? Can you share something unusual from your own profession or life with which others might be unfamiliar?

13. Cecily lives a life of dualities (page 67): Hero and failure. Brave and cowardly. Adventurous and homebody. Chinese and white. In what regard do you have a dual nature?

14. Do you think fear is a necessary factor when it comes to staying alive?

15. Murder and deception aside, does Amy McCulloch want to make you attempt a sport as extreme as mountain climbing, or leave the thrills to your imagination?

All the Broken People

Tell No One/Gone for Good
Back to Top