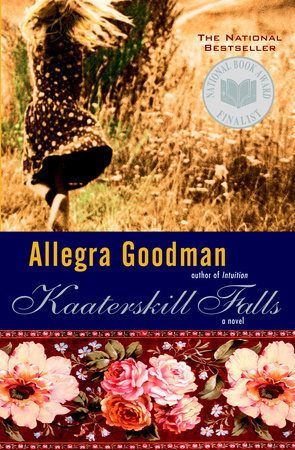 The questions, discussion topics, and author biography that follow are intended to enhance your group’s reading of Allegra Goodman’s Kaaterskill Falls. We hope they will enrich your understanding of this wonderful novel of faith, families, and ancient tradition—a story of passionate love and passionate conflict that confirms Goodman as one of the singular writers of her generation.

It is the summer of 1976. In the beautiful country of upstate New York lies Kaaterskill, a tiny town where Jewish Orthodox summer people and Yankee year-rounders live side by side from June to August. Elizabeth Shulman, mother of five daughters, needs a project of her own outside her cloistered community. Across the street, Andras Melish cannot overcome the ambivalence he feels toward his own children and his beautiful young wife. At the top of the hill, Rav Elijah Kirshner is nearing the end of his life, and he struggles to decide which of his sons should succeed him. Behind the scenes, alarmed as his beloved Kaaterskill is overdeveloped by the local real estate broker, Judge Miles Taylor keeps an old secret in check, biding his time…

Within this community Allegra Goodman weaves magic. From first word that she was at work on her debut novel, a genuine buzz began to build as the literary community awaited her results. Met with universal acclaim, Kaaterskill Falls, a national bestseller, fulfilled the promise and became a finalist for the National Book Award.

1. The community of the Kirschners takes everything the Rav Elijah says to be the final word in how they live their lives—and treats him as someone very close to God. Does the Rav see himself that way?

2. Why do the members of this orthodox community stay so close to the teachings of Rav Elijah—even when they go against their own inclinations or desires? What is so important to them about this community?

3. Why is Elizabeth so dependent on Isaac’s support to open her store? If she could have seen the Rav by herself, would she still need Isaac’s blessing?

4. Why is Isaac so ready to support Elizabeth in a new job—after her store has been shut down and she gives birth? What does this say about the way he views her—and her role in their family?

5. Andras and Nina’s marriage was also of their own choice, yet it has been unhappy for many years. Why?

6. How has Andras’s relationship with his sisters both helped and harmed him over the years? Was he too dependent on them to become a true part of his own family—with his wife and children?

7. Jeremy has been a confirmed bachelor throughout his adult life. How much of that is out of rebellion to his family and community?

8. Isaiah’s wife, Rachel, is more vocal about the Rav’s mistreatment of her husband. Her ambitions for her husband are high—but she still holds the position of Rav in reverence. How can she respect someone she’s so angry with? How does she reconcile those feelings—or does she?

9. How are Cecil’s rebellions—marrying Beatrix, speaking out for Zionism, having a naming ceremony for his daughter—different from Jeremy’s? Why do people accept his behavior more readily than Jeremy’s, and why is he happier?

10. Elizabeth and her daughter Chani are both rebelling against the conventions of the community in their own ways. Will this make it easier on Chani if she decides to go to Israel?

Allegra Goodman made her name writing short fiction. Her first collection of stories, Total Immersion, was a national bestseller in 1989. It was followed by her critically acclaimed collection, The Family Markowitz. Her novels include Kaaterskill Falls–a National Book Award finalist–and a new novel to be published by The Dial Press in the year 2000. She was also a recipient of the Whiting Writer’s Award. Her work has appeared in The New Yorker, Allure, Food, Vogue, Commentary, and Slate. She lives with her family in Cambridge, Massachusetts.
Learn More About Kaaterskill Falls
print

A Student of Weather
Elizabeth Hay

The Lullaby of Polish Girls
Dagmara Dominczyk
Back to Top