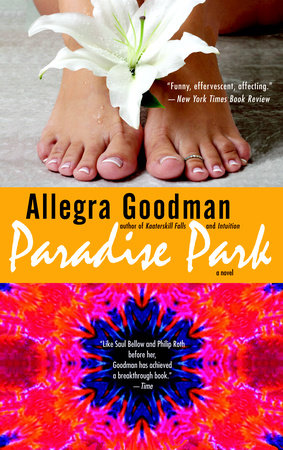 The questions, discussion topics, and author biography that follow are intended to enhance your group’s reading of Paradise Park. We hope they will enrich your understanding of this wonderful novel.

Allegra Goodman’s debut novel, Kaaterskill Falls, was met with universal acclaim, became a national bestseller, and was named a finalist for the National Book Award. In her eagerly-awaited new work, Paradise Park, Goodman introduces one of the most endearing, exasperating, and indomitable heroines of modern literature: Sharon Spiegelman.

Abandoned by her boyfriend in Honolulu, Sharon asks herself, "How come Gary got to pursue his causes, while all I got to pursue was him?" Thus she begins a spiritual quest. After many failed attempts, Sharon discovers a path to Judaism — and begins to hope that the peace and purpose she’s searched for so long is finally close at hand.

"Eloquent … Kaaterskill Falls ratifies the achievement of the author’s short stories, even as it announces the debut of a gifted novelist."
— The New York Times

"A richly textured portrait … not since Chaim Potok’s The Chosen have readers been treated to such an intimate look at a closed Orthodox community."
— Los Angeles Times Book Review

"A carefully observed and haunting novel … Like the late Nobel laureate Isaac Bashevis Singer, Goodman wrings ineffable strands of passion from the quietest of hopes and disappointments."
— People

"A writer of uncommon clarity and grace … Goodman’s handling of incident is masterly."
— The New Yorker

1. What first pushes Sharon on her spiritual quest? What elements in her past life do you think contributed the most to her present journey?

2. For a long time Sharon is searching for a glimpse of God. What is getting in the way of that search as she struggles forward? Why is her quest thwarted time and time again?

3. Why do you think she was so willing at first to just go along with Gary’s ambitions? Is this common for many women? Why?

5. Although a search for God is very much on Sharon’s mind, it doesn’t prevent her from doing things most religions consider "immoral," such as living with Kekui or sleeping with Brian. Why do you think she doesn’t feel guilty about these actions? What distinction does she make between morality and God?

6. What is Sharon hoping to find while researching birds with Brian or farming with Kekui? A spiritual revelation? Something else?

7. Once in a while Sharon still slips into telling lies about her parents or her past (see p. 205). Why do you think that is?

8. Sharon has a hard time reconciling her spiritual quest with Wayne in the second half of their relationship. Wayne is very supportive of her efforts — what’s missing for her?

9. Why are Mikhail and Sharon able to leave the Hasidic community so easily when the complications in their marriage contract come up?

10. What has Sharon found in Mikhail that she didn’t find in her previous relationships?

11. How much responsibility do you think Sharon’s parents have for her struggles to find meaning in life? Would things have been different for her if she’d found more support at home, or was her behavior determined by her personality?

12. After spending so much time exploring Judaism, why isn’t it important for them to have a Jewish wedding?

Allegra Goodman’s work has appeared in The New Yorker, Allure, Commentary, and Slate. She is the recipient of a Whiting Award and the Salon magazine Award for fiction. Her books include Kaaterskill Falls, a National Book Award finalist. She lives with her family in Cambridge, Massachusetts, where she is at work on her next novel.
Learn More About Paradise Park
print

The Master of Petersburg

The Truth About Love
Back to Top