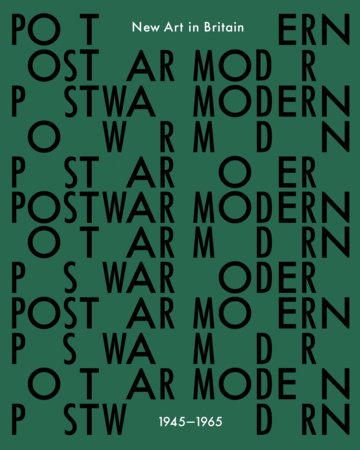 This landmark volume offers a major re-assessment of the art that emerged in Britain in the twenty years following the end of the Second World War: a period of anxiety, profound social change and explosive creativity. Published to coincide with the Barbican Centre’s 40th anniversary, it draws together the work of fifty artists, exploring a period straddled precariously between the horror of the past and the promise of the future.

Spanning painting, sculpture, architecture, ceramics and photography, Postwar Modern will explore a rich field of experiment which challenges the idea that Britain was a cultural backwater at this time.

Through new texts by Jane Alison, Hilary Floe, Ben Highmore, Hammad Nassar and Greg Salter, the book looks afresh at celebrated artists such as Francis Bacon, David Hockney, Lucian Freud and Eduardo Paolozzi, shown in dialogue with lesser-known figures. These will include those, like Francis Newton Souza, Avinash Chandra and Robert Adams, who were acclaimed by contemporaries but neglected in subsequent history-making; others, like Kim Lim, Anwar Jalal Shemza and Franciszka Themerson, are only now attracting the attention they deserve.

Throughout their work, vital shared preoccupations become visible: gender, class, race and nationhood; the body, the bombsite, and the home. It is a period resonating strongly with our own: as the UK emerges from more than a decade of austerity and confronts the challenges of post-pandemic reconstruction, society is asking similarly deep questions about who we want and need to be.