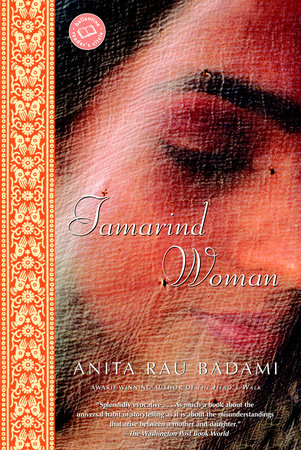 1. Before commencing the story itself, Badami provides
this definition of the tamarind tree: “Folklore has it that
the tamarind tree is the home of spirits that do not let
anything under the tree survive.Accordingly, travelers are
advised not to sleep in its shade. The tamarind tree is
never used for auspicious ceremonies, as its fruit is sour. It
is believed that the ceremony will turn sour and thus become
fruitless and lose all meaning.”How did this definition
color your reading of the story? Is Saroja the only
“Tamarind Woman” in the story? What about Kamini?
Amma?

2. In their first exchange of the novel, Kamini complains
to her mother that “you are inventing memories.”Were
there points of disconnect between Kamini’s remembrance
of the past and Saroja’s? If so, whose tale do you
believe? Why?

3. What did you think about the structure of the novel?
Did you find it enhanced the story to have two separate
voices, each located in the present and narrating a version
of the past? Why do you think Kamini’s voice begins the
story, even though her remembrances occur after Saroja’s?
Why might Badami write the novel this way?

4. Badami engages with India’s notorious caste system
throughout the novel, though specifically in the characters
of Dadda and Paul de Costa. Do you think these
characters acted caste-appropriately? Discuss the interplay
between caste and Saroja’s rather unfeminine personality.
What is Badami trying to say about various forms of social
strictures?

5. What did you think of Chinna, the woman who is
defeminized and ostracized because her mate died too
soon? How does her character compare to that of Linda
Ayah?

6. Historically, Badami writes during the years just following
India’s independence from British rule.What sort
of residual influence does the colonial rule of Britain still
have upon the story’s characters, if any? Does this context
help to explain the dynamic between Saroja, Dadda,
Kamini, and Roopa?

7. Did you find the family life presented in the book typical?
In what ways did you relate to this family? What did
you not relate to? How much do you think culture informs
the differences between family relationships?

8. Did Saroja have a full-blown affair with Paul de Costa?
Or was it more like an unrequited crush? Is this the reason
he hangs himself in the game room at the club? If
not, then why else do you think he would commit such
an outlandish final act? How important is his suicide to
the novel as a whole?

9. Kamini and Roopa live polarized adult lives: Kamini
as the reclusive, neurotic academic, Roopa as the practical
mother. Their commonality lies in their distance from
both India and Saroja. Given Kamini’s remembrances,
does it make sense to you that she and Roopa would, in
effect, run away from home? Why do you think they have
such different adult desires and interests?

10. Ever since she was a child, Kamini has been obsessed
with discerning the difference between fact and fiction,
though she has always been unable to do so.Through her
conversations with her mother, we see that this pattern
still holds.What affect has this unsatisfiable obsession had
upon Kamini? Does it explain her choice to study engineering
and move to Calgary in pursuit of a Ph.D.?

11. Saroja and Dadda have a rather loveless marriage.
Linda Ayah’s husband cheated on her, Chinna is marked
for life as a childless widow. Badami presents many different
types of marriage throughout the novel; what do you
think she’s trying to say about the institution as a whole?

12. As a railway engineer, Dadda travels constantly, sometimes
taking his family along with him. Initially Saroja
hates to travel, finding it profoundly disorienting.Yet, at
the end of her life, traveling becomes a type of liberation
for her.What do you think makes the difference for her?

13. Of the male characters in the novel, most seem either
indifferent to women or dominant over them. What do
you think of the men? Do you feel sympathetic to any of
them? Who is the novel’s most influential male?

14. While sitting on the hot train, telling her stories, one
of Saroja’s fellow travelers comments, “Going away is
the easiest thing in the world. It is like dying. So simple it
is to die. Living is hard, to make this small amount of
time loaned to you by the gods worthwhile is hard.The
real test is life itself, whether you are strong enough to
stay and fight.” What do you think of this statement? Furthermore,
reflecting on the context of our two narrators
—Kamini in a cold room, all alone, and Saroja in a hot
train, surrounded by women—who do you think is “traveling”
or “going away” and who is “living”?

Nature and Other Mothers
Brenda Peterson

In My Sister’s House
Donald Welch

The Night Before Thirty
Tajuana Butler

The Kind of Love That Saves You
Amy Yurk

The Promise of Forgiveness
Marin Thomas