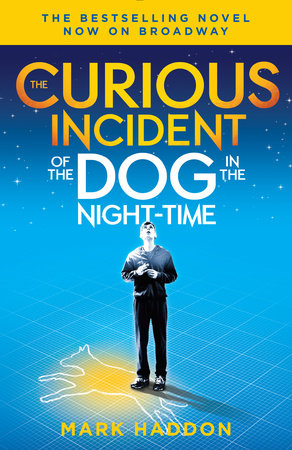 The introduction, discussion questions, suggested reading list, and author biography that follow are designed to enhance your group’s reading of Mark Haddon’s The Curious Incident of the Dog in the Night-Time. We hope they will provide useful ways of thinking and talking about this extraordinary novel, which won Britain’s Whitbread Award.

Christopher John Francis Boone knows all the countries of the world and their capitals and every prime number up to 7,057. He relates well to animals but has no understanding of human emotions. He cannot stand to be touched. Although gifted with a superbly logical brain, Christopher is autistic. Everyday interactions and admonishments have little meaning for him. Routine, order, and predictability shelter him from the messy wider world. Then, at fifteen, Christopher’s carefully constructed world falls apart when he finds his neighbor’s dog, Wellington, impaled on a garden fork, for which he is initially blamed.

Christopher decides that he will track down the real killer and turns to his favorite fictional character, Sherlock Holmes, for inspiration. But the investigation leads him down some unexpected paths and ultimately brings him face-to-face with the dissolution of his parents’ marriage. As he tries to deal with the crisis within his own family, we are drawn into the workings of Christopher’s mind.

And herein lies the brilliance of Mark Haddon’s choice of narrator: The most wrenching of emotional moments are chronicled by a boy who cannot fathom emotion. The Curious Incident of the Dog in the Night-Time is one of the freshest debuts in years: a comedy, a heartbreaker, a mystery story, a novel of exceptional literary merit that is great fun to read.

1. On pages 45–48, Christopher describes his “Behavioral Problems” and the effect they had on his parents and their marriage. What is the effect of the dispassionate style in which he relates this information?

2. Given Christopher’s aversion to being touched, can he experience his parents’ love for him, or can he only understand it as a fact, because they tell him they love him? Is there any evidence in the novel that he experiences a sense of attachment to other people?

3. One of the unusual aspects of the novel is its inclusion of many maps and diagrams. How effective are these in helping the reader see the world through Christopher’s eyes?

4. What challenges does The Curious Incident present to the ways we usually think and talk about characters in novels? How does it force us to reexamine our normal ideas about love and desire, which are often the driving forces in fiction? Since Mark Haddon has chosen to make us see the world through Christopher’s eyes, what does he help us discover about ourselves?

5. Christopher likes the idea of a world with no people in it [p. 2]; he contemplates the end of the world when the universe collapses [pp. 10–11]; he dreams of being an astronaut, alone in space [pp. 50–51], and that a virus has carried off everyone and the only people left are “special people like me” [pp. 198–200]. What do these passages say about his relationship to other human beings? What is striking about the way he describes these scenarios?

6. On pages 67–69, Christopher goes into the garden and contemplates the importance of description in the book he is writing. His teacher Siobhan told him “the idea of a book was to describe things using words so that people could read them and make a picture in their own head” [p. 67]. What is the effect of reading Christopher’s extended description, which begins, “I decided to do a description of the garden” and ends “Then I went inside and fed Toby”? How does this passage relate to a quote Christopher likes from The Hound of the Baskervilles: “The world is full of obvious things which nobody by chance ever observes” [p. 73]?

7. According to neurologist Oliver Sacks, Hans Asperger, the doctor whose name is associated with the kind of autism that Christopher seems to have, notes that some autistic people have “a sort of intelligence scarcely touched by tradition and culture—unconventional, unorthodox, strangely pure and original, akin to the intelligence of true creativity” [An Anthropologist on Mars by Oliver Sacks, NY: Vintage Books, 1995, pp. 252–53]. Does the novel’s intensive look at Christopher’s fascinating and often profound mental life suggest that in certain ways, the pity that well-meaning, “normal” people might feel for him is misdirected? Given his gifts, does his future look promising?

8. Christopher experiences the world quantitatively and logically. His teacher Mr. Jeavons tells him that he likes math because it’s safe. But Christopher’s explanation of the Monty Hall problem gives the reader more insight into why he likes math. Does Mr. Jeavons underestimate the complexity of Christopher’s mind and his responses to intellectual stimulation? Does Siobhan understand Christopher better than Mr. Jeavons?

9. Think about what Christopher says about metaphors and lies and their relationship to novels [pp. 14–20]. Why is lying such an alien concept to him? In his antipathy to lies, Christopher decides not to write a novel, but a book in which “everything I have written . . . is true” [p. 20]. Why do “normal” human beings in the novel, like Christopher’s parents, find lies so indispensable? Why is the idea of truth so central to Christopher’s narration?

10. Which scenes are comical in this novel, and why are they funny? Are these same situations also sad, or exasperating?

12. One of the primary disadvantages of the autistic is that they can’t project or intuit what other people might be feeling or thinking—as illustrated in the scene where Christopher has to guess what his mother might think would be in the Smarties tube [pp. 115–16]. When does this deficit become most clear in the novel? Does Christopher seem to suffer from his mental and emotional isolation, or does he seem to enjoy it?

13. Christopher’s parents, with their affairs, their arguments, and their passionate rages, are clearly in the grip of emotions they themselves can’t fully understand or control. How, in juxtaposition to Christopher’s incomprehension of the passions that drive other people, is his family situation particularly ironic?

14. On pages 83–84, Christopher explains why he doesn’t like yellow and brown, and admits that such decisions are, in part, a way to simplify the world and make choices easier. Why does he need to make the world simpler? Which aspects of life does he find unbearably complicated or stressful?

15. What is the effect of reading the letters Christopher’s mother wrote to him? Was his mother justified in leaving? Does Christopher comprehend her apology and her attempt to explain herself [pp. 106–10]? Does he have strong feelings about the loss of his mother? Which of his parents is better suited to taking care of him?

16. Christopher’s father confesses to killing Wellington in a moment of rage at Mrs. Shears [pp. 121–22], and swears to Christopher that he won’t lie to him ever again. Christopher thinks, “I had to get out of the house. Father had murdered Wellington. That meant he could murder me, because I couldn’t trust him, even though he had said ‘Trust me,’ because he had told a lie about a big thing” [p. 122]. Why is Christopher’s world shattered by this realization? Is it likely that he will ever learn to trust his father again?

17. How much empathy does the reader come to feel for Christopher? How much understanding does he have of his own emotions? What is the effect, for instance, of the scenes in which Christopher’s mother doesn’t act to make sure he can take his A-levels? Do these scenes show how little his mother understands Christopher’s deepest needs?

18. Mark Haddon has said of The Curious Incident, “It’s not just a book about disability. Obviously, on some level it is, but on another level . . . it’s a book about books, about what you can do with words and what it means to communicate with someone in a book. Here’s a character whom if you met him in real life you’d never, ever get inside his head. Yet something magical happens when you write a novel about him. You slip inside his head, and it seems like the most natural thing in the world” [http://www.powells.com/authors/haddon.html ]. Is a large part of the achievement of this novel precisely this—that Haddon has created a door into a kind of mind his readers would not have access to in real life?

19. Christopher’s journey to London underscores the difficulties he has being on his own, and the real disadvantages of his condition in terms of being in the world. What is most frightening, disturbing, or moving about this extended section of the novel [pp. 169–98]?

20. In his review of The Curious Incident, Jay McInerney suggests that at the novel’s end “the gulf between Christopher and his parents, between Christopher and the rest of us, remains immense and mysterious. And that gulf is ultimately the source of this novel’s haunting impact. Christopher Boone is an unsolved mystery” [The New York Times Book Review, 6/15/03, p. 5)]. Is this an accurate assessment? If so, why?

Mark Haddon is a writer and illustrator of numerous award-winning children’s books and television screenplays. As a young man, Haddon worked with adults and children with a variety of physical disabilities and learning difficulties. He teaches creative writing for the Arvon Foundation. He lives in Oxford, England.

Sir Arthur Conan Doyle, Adventures and Memoirs of Sherlock Holmes; Uta Frith, Autism: Explaining the Enigma; Howard Gardner, Frames of Mind: The Theory of Multiple Intelligences; Temple Grandin, Emergence: Labeled Autistic and Thinking in Pictures: and Other Reports from My Life with Autism; Henry James, What Maisie Knew; Mel Levine, All Kinds of Minds: A Young Student’s Book About Learning Abilities and Learning Disorders; Ian McEwan, Atonement; Clara Claiborne Park, The Siege: A Family’s Journey into the World of an Autistic Child; Oliver Sacks, An Anthropologist on Mars: Seven Paradoxical Tales.
Learn More About The Curious Incident of the Dog in the Night-Time
print

You Think It, I’ll Say It
Curtis Sittenfeld

What We Lose
Zinzi Clemmons

The Idiot
Elif Batuman
Back to Top