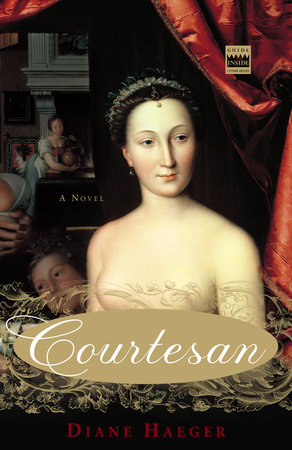 Courtesan is a story of courtly love and true romance, of legendary devotion and devastating loss. Amid the intrigues of the French court, Prince Henri and Diane de Poitiers give in to their attraction, changing both their lives forever. Despite Henri’s political marriage to Catherine de Medici, he forever seeks ways to communicate to France that it is Diane who is his “true queen.” It is Diane who enjoys unrivaled power, thanks to the generosity and devotion of her lover. But it is Diane who risks losing all by linking her life to Henri.

1. Though Henri seems unswervingly confident in his relationship with Diane, Diane herself admits to herself at the end of his life that she is amazed that his affections have lasted so long. How would you explain how his devotion to Diane remained so strong?

2. What kind of a ruler do you think Henri is for France? What are his leading motivations and interests?

3. What motivations cause Diane to remain with Catherine through her illness? Is this a purely selfless act?

4. After Catherine’s illness, she suggests that the two women could have been friends in different circumstances. Do you think this is true? Why or why not?

5. In what ways did François and Anne’s romance differ from Henri and Diane’s affair? Which do you think was better suited to court life?

6. Discuss Henri’s feelings for Catherine. Could his marriage have been a happy one if Diane had not been in the picture? Why or why not?

7. In her early years at court, what does Diane see in Jacques de Montgommery? Is she sincerely taken in by his offers of friendship, or is she just desperate for an ally?

8. When Diane returns to Court, general rules of behavior and sexual license in particular seem much looser than during her previous visits. What factors do you think are responsible for this shift? What–or who–gives the court its character? Do you think this licentious mood continues under Henri’s reign?

10. Why are Henri and Diane so enchanted by Cauterets? Compare the way their romance develops at Court with the way they bond away from it–whether at Cauterets, Chenonceaux, or Anet.

11. Why does Catherine allow Henri to continue his relationship with Diane? Did she have any choice in the matter?

12. Discuss Henri and Anne’s encounters with Protestantism in the book. Between the burnt parish church in Cauterets and the Protestant prisoner brought to Diane’s house in Paris, do they seem to be getting an accurate picture of the Protestant movement? Do you think they understand why the movement is popular and powerful?

13. Do you think there is anything to the rumors that Diane secured her husband’s pardon by sharing sexual favors with King François? Why or why not?

14. Discuss the role of the supernatural in the book. More than one fortune-teller’s forecast is borne out in the course of the story, including the predictions of Diane’s third child and the timing and cause of Henri’s death. What does the author seem to be saying about intuition and fate?

Diane Haeger is the author of four previous historical novels, including The Ruby Ring and My Dearest Cecilia. She lives in California with her husband and family.
Learn More About Courtesan
print