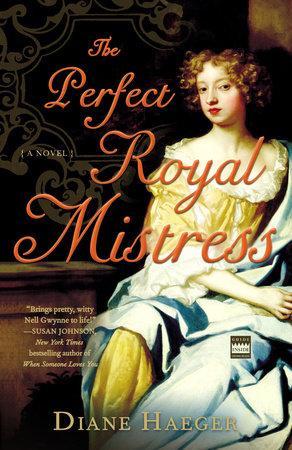 A legendary actress. A mistress to a monarch. A woman who would rise from the ashes of London to take her place in history.

Nell Gwynne, born into poverty and raised in a brothel, starts her working life selling oranges in the pit at London’s newly reopened King’s Theater, just after the plague and the subsequent Great Fire have devastated the city. Her quick sense of humor and natural charm get her noticed by those who have the means to make her life easier, though Nell is street-smart enough to know that a woman doesn’t get ahead by selling her body. Through talent, charm, intelligence, and sheer determination–as well as a realistic understanding of how the world works–Nell makes her way out of the pit and onto the stage to become the leading comedic actress of the day. Her skill and beauty quickly win the attention of all of London–eventually even catching the eye of the king himself. Before she knows it, the scrappy orange girl with the pretty face and the quick wit finds herself plunged into the confusing and dangerous world of the court, and she must learn quickly who to trust–and who to never turn her back on.

From the grit of the streets and the backstage glamour of London’s theaters to the glittering court of Charles II, The Perfect Royal Mistress is a love story for the ages, the rags-to-riches tale of a truly remarkable heroine.

The questions in this guide are intended as a framework for your group’s discussion of The Perfect Royal Mistress.

DIANE HAEGER is also the author of The Ruby Ring, Courtesan, and The Secret Wife of George IV. She lives in California with her husband and family.

1. Very early on, Nell comments that to survive despite hardship, “one simply had to put one’s head down and keep going along” (page 2). How does this attitude help her throughout her life? Are there others in the novel who either live by this rule or don’t? How do they fare? Do you think Nell’s approach changes as she grows older and more experienced, or

2. What is the turning point in young Nell’s life? At what point does she become one who makes things happen, rather than one who things happen to? Can you pinpoint a moment where she discovers the power she has?

3. What is it about Nell that first catches the king’s eye? Does what he sees in her change over time or remain constant? Why is this infatuation so lasting when so many of the other mistresses are fleeting?

4. Consider those who Nell encounters at the court of Charles II. What drives these men and women? In what ways are they similar to each other, and who stands out, positively or negatively, as different from the pack? Did anyone surprise you? How?

5. Why does Richard commit himself so fully to helping Nell? Why is he so loyal to her throughout his life, asking very little in return? What does he get out of their relationship?

6. Consider the impact of parental relationships on the main characters in The Perfect Royal Mistress. How are each of these people affected by the actions of their parents, and how does this legacy manifest itself? If you were to look one generation into the future, how would you see the cycle continuing? What effect do you imagine these characters’ lives and choices having on their own children?

7. When Nell attends the state ball with Charles (with Louise on his other arm), why, despite her fear of making a fool of herself, does she go against Mary Chiffinch’s advice and insist on wearing her dress with the laces unfastened, though she knows that it is not proper? What is it that Rose seems to understand about this choice?

8. Discuss the relationship between George Villiers, Duke of Buckingham, and Nell. From such a rocky beginning, were you surprised at the genuine friendship that develops between them? How does each win the other over? Did you question Nell’s willingness to trust Buckingham at all? At what point did he show himself to be her true friend?

9. It is clear that Nell loves Charles dearly and honestly, but nevertheless, she still continues to manipulate him into doing what she wants. Consider these manipulations and the reasons behind them. Why does she do this, and how does she accomplish her goals? What did you think of this? Does the fact that Nell has to use such tactics with the king to get a title for her son, for example, negate the gesture once it is made? What do these exchanges say about their relationship? Do you think Charles knows when he’s being played?

10. At what point does Charles lose interest in Louise de Kéroualle, and why does he not dispatch with her immediately as he does his other discarded mistresses? Why is she allowed to stay by his side for the rest of his life? Did you think this fact lessens Nell’s place at his side? Why or why not?

11. Do you believe that Charles is happy at the end of his life? Why or why not? What would happiness have entailed for the monarch? What does he want to accomplish, and what do you think would bring him peace? What is Charles’s driving need and how does he go about filling it?

12. Throughout the novel, Nell is treated poorly by many of the people she encounters but holds very few grudges. In what cases does she hold past wrongs against the person who has committed them, and in what cases does she forgive and forget? Why do you think this is? What accounts for the difference? Did you agree with her choices in this respect?

13. What did you make of the character of Queen Catherine? Despite her estrangement from her husband, Catherine still wields an extraordinary amount of power over Charles. Is this entirely a result of her position as queen, or also due to something inherent in their relationship? What do you imagine the queen’s life to be like?

14. Why does Nell refuse to give up acting for so long, even when the king wants her to? Is the reason financial independence, as she maintains to him, or is there something more in it for her? What is it about the theater that keeps her coming back?

15. Prior to reading The Perfect Royal Mistress, what, if anything, did you know about Nell’s story? What did you think about this portrayal? What expectations did you have going in, and how did the novel fulfill them or surprise you?

A Catch of Consequence
Diana Norman

In the Shadow of the Crown
Jean Plaidy
Back to Top