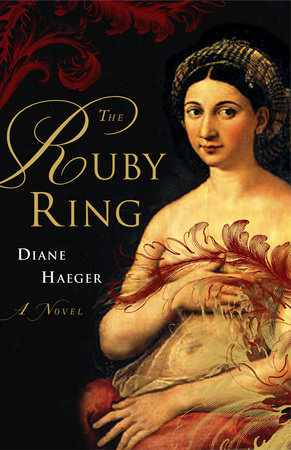 The following questions are designed to direct your group’s discussion of this haunting story of illicit passion and political manipulation: The Ruby Ring.

The year is 1514. Raphael Sanzio, the darling of the Italian art world, has grown accustomed to having Pope Leo X wrapped around his talented little finger. Raphael’s innovative portraits, altarpieces, and frescoes have so enthralled Rome’s elite art collectors, in fact, that his archrival, Michelangelo Buonarroti, has stormed off to Florence to lick his wounds. Yet trouble is brewing for the mastro.With dozens of commissions from imperious, impatient clients piling up in his bustling studio, Raphael’s energy is flagging. Exhausted and bitter from churning out one masterpiece after another on demand, he yearns for the inspiration and creative freedom he enjoyed before fame wreaked its havoc on him.

Meanwhile, Margherita Luti, a baker’s daughter, dreams of a gilded life outside the stifling confines of her family’s humble reality. When a walk along the Tiber River brings her face-to-face with the legendary master artist Raphael Sanzio, her predictable life lifts off its axis and is recast inalterably. For four years, the mastro has scoured Rome in search of the perfect model to sit for a painting of the Madonna to grace the new Sistine Chapel. In Margherita, Raphael finds at last the timeless beauty he craves. So begins a fraught courtship that will blossom and consume them both—sending shock waves through the upper echelons of Rome’s clergy. For Raphael is ensnared in a politically charged betrothal to a senior cardinal’s niece, and his attempts to end the engagement not only enrage the pope and his powerful cronies, but place his beloved muse, Margherita, in mortal danger.

1. Like Margherita, Raphael idealizes his dead mother, “whose loss had forever changed his life.” How is his obsession with the Madonna image linked to this tragedy? Does his sense of abandonment abate once he is involved with Margherita?

2. As the story opens, Raphael has lost the “heated passion toward creation” that once fueled his painting. His artistic block is already well known to his increasingly impatient patrons. Why, then, does he attempt to keep it a secret from his assistants? Is he motivated by pride, or by kindness?

3. Francesco Luti urges his daughter to take the plunge and accept Raphael’s extraordinary invitation to model for him. “Look beyond your nose,” he argues. “There is a whole wide world out there, and none of us has ever had the chance to see any of it.” How does his advice echo the advice pressed upon Raphael by his own father? What are both fathers trying to protect their children from, and what counterargument do both Margherita and Raphael offer in response?

4. Margherita’s stubborn refusal to succumb to Raphael’s advances stems from a deep cynicism about the entrenched social hierarchy in Rome: “A man who breaks bread with dukes, kings, and the Holy Father himself does not make a wife of the woman who bakes that bread!” she insists. Does she ever fully transcend this sense of social inferiority beside Raphael?

5. Raphael is surprisingly compassionate toward his enemies. Even when Sebastiano Luciani hires thugs to break Raphael’s hand, Raphael rationalizes, “He is desperate, and desperation can all too easily cloud the mind of wisdom.” Is Raphael too soft for his own good?

6. It is common Vatican knowledge that Cardinal Bibbiena cares deeply about the happiness of his niece, Maria. Yet when she begs to be allowed to call off her agonizing and embarrassing engagement to the unfeeling Raphael, the cardinal refuses her this relief. Why?

7. What does Antonio stand to gain by telling Agostino Chigi that Margherita is the cause of Raphael’s deteriorating work pace? Does he achieve it?

8. With his dedication to his commissions flagging, his distaste for the hypocrisies of the Vatican growing, plenty of wealth amassed, an interested clientele in France, and Margherita with whom to build a new life—why doesn’t Raphael simply throw in the towel and set himself free from the constant pressure that plagues him in Rome?

9. At the beginning of the novel, Margherita makes it very clear that she is too savvy to be bamboozled by the likes of Raphael. Why, then, does she allow herself to be charmed by the sleazy Sebastiano Luciani, even going so far as to dismiss Raphael’s warnings about him: “Raphael must be wrong about him . . . Sebastiano simply could not be guilty of those . . . awful things.” Why does she sit with him, unchaperoned, at the pope’s party?

10. When it becomes clear that the kidnapping plan has backfired and Raphael has not resumed his prolific work pace, Agostino Chigi suggests to Pope Leo that it’s time to confess the plot to Raphael. Is Chigi motivated by compassion here, or by the same self-interest that motivates Leo and Bibbiena? Why does the pope agree to do it?

11. Only when Raphael lies dying and Margherita is in dire straits do we discover that her relations with her family have deteriorated to the point where “They did not want her back now . . . she could never go home to the bakery or the life she once had lived there.” Why do you think the author skips over the potentially juicy story of the Luti family’s disintegration?

12. Margherita’s motivation for destroying Raphael’s new will—which leaves everything to her—and replacing it with the old one, which bequeaths Raphael’s estate to Giulio Romano, is left a mystery. Can you decipher a meaning behind Margherita’s selfpunishing decision?

13. How does Donato gently reveal to Margherita both Antonio’s duplicity and Raphael’s genius? Why does he betray his brother’s secret?

14. Why does Raphael blame the supposed celibacy of the clergy for some of his troubles?

15. Why do you think the author includes the subplot involving Maria Bibbiena and her chief guard? Does the guard’s attention and tenderness humanize Maria in your view? What point is the author making about unexpressed attraction?

16. What parting advice does Leonardo da Vinci offer Raphael about how to handle his relationship with Margherita? Is it wise?

17. Does Raphael’s pervasive self-doubt and the episodes of selfpity that verge on wallowing—bemoaning his life “with no family, no love, no reason even to exist, but only to paint and work to the point of exhaustion and blindness! To create only for the desire of others, on and on . . . day after day, then return home completely alone!”, for example—make him a more accessible character? Why or why not?

The Far Side of the Sun
Back to Top